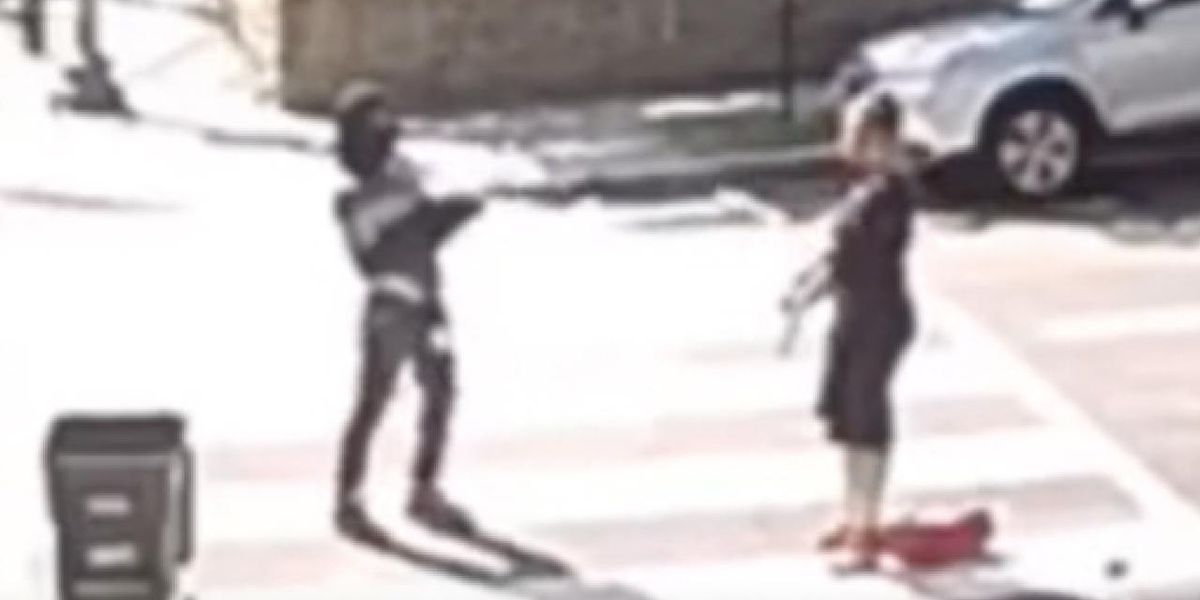 A Washington, D.C., woman was caught on surveillance video standing up to an armed would-be robber who demanded her keys last Tuesday, flatly telling him “No!” and daring him to pull the trigger.

“Shoot me!” she commanded the masked gunman.

He eventually left the scene without firing a shot, and Iris Bond Gill told WTTG-TV all about her harrowing ordeal.

Bond Gill parked her vehicle just after 3:20 p.m. Aug. 23 and was standing on 10th Street NE looking through her purse when the hooded suspect approached her.

Clearly startled, Bond Gill screamed at the sight of the armed male, throwing her dark bag and dropping her red purse on the street before putting her hands up.

But an instant later, Bond Gill got downright confrontational, hollering “What the f***!” and walking toward the gunman.

She told WTTG the would-be crook called her an expletive, ordered her to turn over her keys, and insisted, “I’ll shoot you.”

But Bond Gill is heard on the clip defiantly telling the crook, “No!” and adding a challenge while staring him down in the street: “Shoot me!”

Soon the suspect backs up and begins to move away as Bond Gill claps her hands and appears to holler at the gunman. He then moves toward Bond Gill again, points at her, and even raises his gun at her, apparently pretending to shoot as she flinches.

But Bond Gill won the standoff, and the crook took off for good.

‘I went into almost a chastising mode’

“I’ve seen the video, and to be honest, I saw a young man in front of me [like] a lot of young people I’ve worked with over the years,” Bond Gill explained to the station, noting she’s worked in the education field for many years. “And in some way, I think I went into almost a chastising mode with him as well.”

She added to WTTG that she’s not encouraging others to react the way she did, only emphasizing that it was her gut reaction, and she believes in trusting your gut.

“You know, it’s really complicated to think about now. I don’t exactly remember, but I know – I knew I was in danger,” Bond Gill added to the station. “And so I just threw off my bag and just prepared to be confrontational.”

When WTTG asked Bond Gill what she hopes people will take away from her scary encounter, she replied, “We need stronger communities. You see the suspect back away when a car comes, but no one stopped to help or was really able to intervene.”

“I think there’s power in community in many ways, and I think one, you know, we can advocate for more lights and more cameras and certainly community policing is a part of that and boots on the ground. But it was actually a camera in someone’s house. And it was a car that drove by, that was not driven by anyone official — but just an individual that sort of scared him off,” she explained to the station. “Gone are the days of having older neighbors that sat on the porch all day and watched and waved to you when you got home from work. I think in some ways, trying to think about how to preserve this intergenerational neighborhood is so valuable. We’ve lost so much of that in the city with massive displacement. So, I think just having more people around that know each other and that support each other would be really helpful.”

Bond Gill also told WTTG she hopes others remember the importance of situational awareness, adding that she was distracted while rummaging through her purse when the suspect approached.

D.C. police told the station no arrests have been made yet.

NBC’s Chuck Todd: Bring in More Migrants to Solve Inflation!
Arizona Has A SOROS-BACKED Democrat Running For District Attorney In Maricopa County
Carbon dioxide levels have nothing to do with global temperatures, top scientist says
Column: CBS Is Not ‘Going Rogue’ on January 6 Committee
Are Democrats Rooting for Massive Loss of Life in Florida?