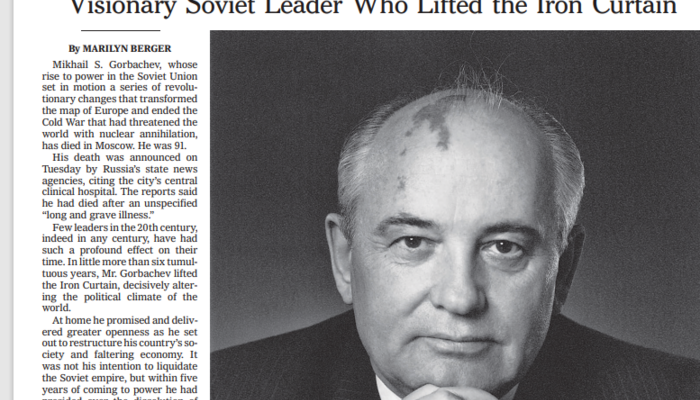 The New York Times continued to overpraise the Soviet Union’s last ruler, Mikhail Gorbachev, upon his death in Moscow at 91, with an 8,000-word front-page tribute from obituary writer Marilyn Berger. The print edition front-page banner headline read “Visionary Soviet Leader Who Lifted the Iron Curtain” over a photo of Russia’s last dictator.

As Rich Noyes wrote in his NewsBusters review of Gorby media adoration: “It’s true that Gorbachev was obviously less brutal than previous communist rulers. But his Soviet Union was hardly an enlightened, peace-loving democracy. While Gorbachev relaxed the repression of previous years, he did not shut down the Gulag, allow a free press, or permit the free expression of religion.”

That certainly wasn’t the angle the Times took upon Gorbachev’s death. 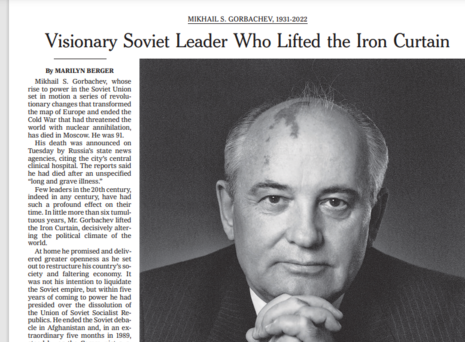 Mikhail S. Gorbachev, whose rise to power in the Soviet Union set in motion a series of revolutionary changes that transformed the map of Europe and ended the Cold War that had threatened the world with nuclear annihilation, has died in Moscow. He was 91.

Few leaders in the 20th century, indeed in any century, have had such a profound effect on their time. In little more than six tumultuous years, Mr. Gorbachev lifted the Iron Curtain, decisively altering the political climate of the world.

At home he promised and delivered greater openness as he set out to restructure his country’s society and faltering economy. It was not his intention to liquidate the Soviet empire, but within five years of coming to power he had presided over the dissolution of the Union of Soviet Socialist Republics….

Berger retained the annoying tic of portraying anti-Communists as “liberals,” when in the United States the most ardent foes of Communism are conservatives.

For this he was hounded from office by hard-line Communist plotters and disappointed liberals alike, the first group fearing that he would destroy the old system and the other worried that he would not.

A man of openness, vision and great vitality, he looked at the legacy of seven decades of Communist rule and saw official corruption, a labor force lacking motivation and discipline, factories that produced shoddy goods, and a distribution system that guaranteed consumers little but empty shelves — empty of just about everything but vodka.

Berger insisted that “Mr. Gorbachev’s first five years in power were marked by significant, even extraordinary, accomplishments.” Her list included “an arms agreement with the United States….multiparty elections in Soviet cities….an attack on corruption in the upper reaches of the Communist Party…allowing previously censored books to be published and previously banned movies to be shown.” Gorbachev’s violent crackdowns on peaceful demonstrations in Lithuania and Latvia made it only deep into the 8,000-word obituary.

As a loyal Communist, Mr. Gorbachev had intended to work through the party to rehabilitate Soviet society. But it became apparent to him that tinkering would never be enough to repair what was broken. The changes would have to be as broad as the problems were deep. He came to see that Communism could no longer be the ruling force in Soviet life.

Yet Gorbachev failed to replace the Communist Party with a new party (a mistake he later admitted, and which Berger acknowledged deep in the obituary). He wanted to keep the Soviet Union intact, with reforms, but failed. Still Berger credited him with being an avatar of freedom for Europe:

In a few euphoric months in 1989, the political architecture of Europe was transformed by popular demand for democracy. Seven countries that had been locked behind the Iron Curtain for more than four decades once again tasted independence….

There is little question that Mr. Gorbachev was the catalyst of that change….

As usual in these Cold War retellings, the vision and foresight and accomplishments of actual opponents of Communism, U.S. president Ronald Reagan and U.K. Prime Minister Margaret Thatcher, were given short shrift