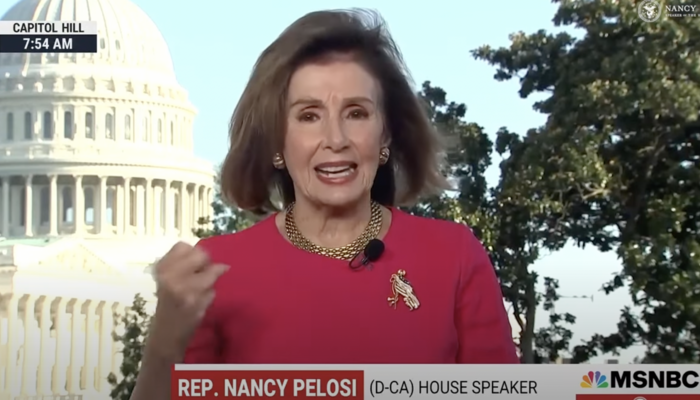 Pelosi is off her rocker — again.

During the Roundtable on Women’s Reproductive Health at the University of California, San Francisco, on August 26, House Speaker Nancy Pelosi claimed that opposing abortion is “sinful.”

“But one word that pervaded through all of the discussion was the word ‘justice.’ The fact that this is such an assault on women of color and women — lower income families — is just sinful,” she said.

Then, she idiotically said it again, further proving her delusion.

It’s sinful. It’s wrong that they would be able to say to women what they think women should be doing with their lives and their bodies. But it’s sinful, the injustice of it all.

Is this lady trying to look dumb? If so, it’s working.

Pelosi regularly and persistently references her “Catholic faith” as if proclaiming an affiliation will deflect from the vile, absurd and outrageous claims in support of abortion.

If she’s so “devout,” she she should recognize that the Bible clearly indicates that life begins at (or rather before) conception even happens. “or you created my inmost being; you knit me together in my mother’s womb. (Psalm 139:13-14).

The Bible also list’s The Lord’s commandments which include “thou shalt not murder” (Exodus 20:13).

Pelosi must have her own iteration of the Bible if she seems to think that saving babies is what’s “sinful” and killing them is not. Perhaps she bases her definition of “sinful” on what Satan teaches, not the Lord.

Not only is Pelosi’s claim wrong, it’s embarrassing. By saying that the people who aim to stop the slaughter of the unborn are conducting “sinful” behavior is a complete fallacy and shows how ignorant Pelosi’s statements are.

During the same monologue, Pelosi claimed that she wanted to “enshrine Roe v. Wade.”

Goodness gracious. So she thinks saving babies is ‘sinful’ and wants us to preserve and honor an avenue to abort innocent children. Her cadence and rhetoric seems to be less aligned with the Catholic faith and more aligned with the devil.

Pelosi may claim to be a “devout Catholic” but the Lord knows all and sees all. Maybe she should start taking things more seriously.