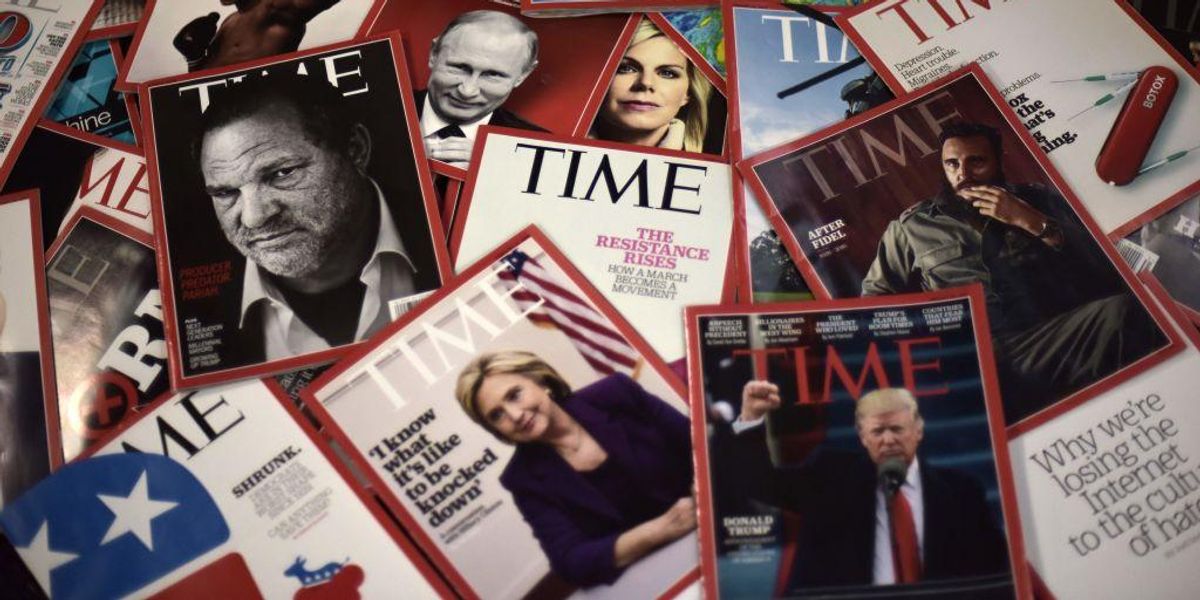 Time magazine was raked over the coals for promoting an article by using befuddling and progressive pronouns to promote the author of a controversial book targeting minors. Time magazine’s use of “absurd,” woke preferred pronouns was quickly skewered in Twitter reactions.

In 2020, the American Library Association named “Gender Queer” as a winner of an Alex Award – “books written for adults that have special appeal to young adults, ages 12 through 18.”

Kobabe is a nonbinary, queer author and illustrator who uses the preferred pronouns of e/em/eir. Kobabe’s pronouns are known as “Spivak pronouns” – named after 1990s mathematician Michael Spivak, who introduced the neopronouns in the manual “The Joy of Tex,” according to Psychology Today.

The Hill reported, “The New York Times is facing backlash from readers after an interview with Maia Kobabe — the author and illustrator of the graphic memoir ‘Gender Queer’ about Kobabe’s coming out as nonbinary — failed to use Kobabe’s preferred gender-neutral pronouns, e, eir and em.”

Time magazine used Kobabe’s preferred pronouns in the article reacting to the news that a Virginia judge had recently struck down an effort to prohibit “Gender Queer” from being sold to minors. The lawsuit argued that the book was obscene and unfit for children.

Time magazine used Kobabe’s preferred pronouns throughout the article, which some readers said made it difficult to read.

Time magazine promoted the article on the media outlet’s official Twitter account with the caption: “TIME spoke to ‘Gender Queer’ author and illustrator Maia Kobabe on about eir work, the efforts to restrict access to eir writing, and what ey make of the current cultural moment.”

u201cTIME spoke to “Gender Queer” author and illustrator Maia Kobabe on about eir work, the efforts to restrict access to eir writing, and what ey make of the current cultural moment https://t.co/JLdmgu5lCLu201d

Author John Hawkins: “Why are you using imaginary words?”

Journalist Kim Iversen: “What’s with the ‘eir’ and ‘ey’? Are we making up new pronouns now?”

Author Frank J. Fleming: “I mean, people are free to use whatever crazy pronouns they want for themselves, but the idea that everyone else is supposed to keep a pronouns spreadsheet based on the whims of every narcissistic weirdo seems unsustainable.”

Evolutionary biologist Colin Wright: “Using these absurd neopronouns isn’t just silly and weird, it helps normalize a regressive pseudoscientific ideology that is inflicting enormous harm on society. Do not comply.”

Author Helen Joyce: “I’m certain that when TIME 1st decided to use ‘preferred pronouns’ it justified it on grounds of kindness & respect. It didn’t occur to anyone that there was no stopping place; that their failure to put accuracy and the reader’s comprehension first meant they were now powerless. To deny ANY ludicrous, narcissistic demand for control by a subject or interviewee over how they are referred to.”

Colorado State Senator Nathan Dahm: “Language is an important part of a culture. Leftists want to destroy every aspect of us including our culture. That’s why they’ve redefined the meaning of vaccine, recession, and woman. This is utter nonsense. And we’re under no obligation to encourage these delusions.”

Senior fellow at Independent Women’s Forum Beverly Hallberg: “How can we insist children learn and use proper grammar when this is mainstream?”

Singer Phil Labonte: “I use the pronouns people prefer. I will call a trans woman ‘she’ or a trans man ‘he’. I’ll do it all the time, and I’ll do it with courtesy, respect, and charity. I refuse to use these narcissistic neo-pronouns.”

Author Adam B. Coleman: “What the hell is an ‘eir’? I thought Time was having mini strokes as they were typing this out or something.”

Podcast host Katie Herzog: “For a second I thought TIME was tweeting in German.”

Conservative commentator Matt Walsh: “My pronouns are kwioaljfnaueakjnfkak/ealjnuaepasnfjnweounaljsnflajnelfnakjaf/ajnfoenfoiefnkjnfiuouenafef03910394. Please refer to me accordingly.”

Editor Ben Kew: “People may laugh, but I actually find it pretty sad to see a publication as iconic as TIME Magazine reduced to this.”

Time magazine was recently blasted for a “sycophantic” cover of President Joe Biden and belittling Helen Keller as “just another privileged white person.”