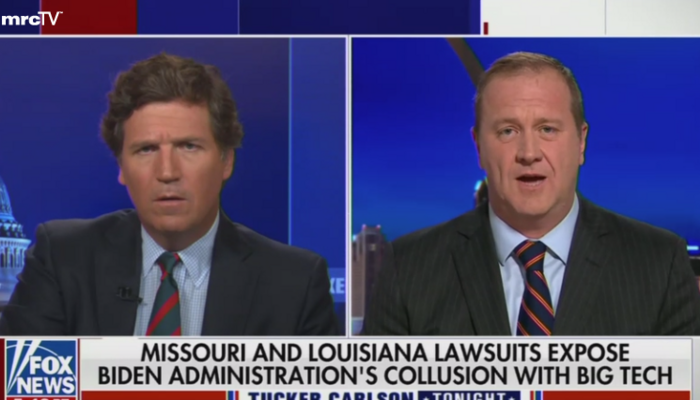 Schmitt revealed the progress of a major lawsuit that he and the Louisiana attorney general Jeff Landry filed in May against Biden administration officials for coordinating with social media companies to censor speech. “We have already received a number of documents that clearly prove that the federal government has an incestuous relationship with social media companies and clearly coordinate to censor freedom of speech, but we’re not done,” said Schmitt in a press release Sept. 1. “The Department of Justice is cowering behind executive privilege and has refused to turn over communications between the highest-ranking Biden Administration officials and social media companies. That’s why, yesterday, we asked the Court to compel the Department of Justice to produce those records. We’re just getting started – stay tuned.”

Schmitt appeared on Fox News host Tucker Carlson’s show Sept. 1 to discuss the revelations. “This is quite frankly, Tucker, the first time anybody’s got a chance to look under the hood, right, of the communications between the Biden administration and with their Big Tech partners,” Schmitt said. “They also were able to establish a verified flagging status for government officials to directly go and censor.”

The revelations note pressure from the Centers for Disease Control and Prevention (CDC) on Big Tech companies.

“The CDC also proposed a monthly debunking meeting with Facebook to help them censor free speech as well as regular ‘Be on the Lookout’ calls with major social media outlets,” Schmitt tweeted.

Schmitt posted other documents, including one showing that “Twitter scheduled a meeting to debrief top White House officials on ‘vaccine misinformation.’”

Other documentation revealed, according to Schmitt: “There are several instances where Facebook wouldn’t proceed with censoring freedom of speech on their platform until they had input, or a ‘debunking’ from the CDC.” Twitter did the same in at least one email, Schmitt added.

More documentation he posted showed that Facebook increased its censorship of free speech after a meeting with the U.S. surgeon general.

The documentation also included government communications about its Orwellian Disinformation Governance Board (DGB), which was finally terminated last week after scandals and heavy criticism.

The Cybersecurity and Infrastructure Security Agency (CISA), according to Schmitt, reached out to Twitter, Facebook, Google and Microsoft following the DGB’s “botched rollout.”

The Louisiana and Missouri lawsuit cited original research from Media Research Center and its unique CensorTrack database to support its case.

MRC Free Speech America in April published its findings of 646 cases in CensorTrack of pro-Biden censorship between March 10, 2020, and March 10, 2022.The tally included cases from Biden’s presidential candidacy through roughly the first year of his presidency.

These revelations from Schmitt indicate that government-Big Tech collusion on censorship goes deeper than many thought.

Facebook CEO Mark Zuckerberg admitted last week that his platform censored the Hunter Biden laptop scandal at the FBI’s bidding before the 2020 election, censorship that the Media Research Center found helped steal the election for Joe Biden. The FBI said after Zuckerberg’s statement that the bureau “routinely” works with social media companies to censor.

President Joe Biden himself demanded that tech platforms “deal with the misinformation” in January.

The Biden administration lumped various groups, individuals, and media outlets into its “Toxic Ten” and “Disinformation Dozen” in an attempt to silence them. Media Research Center was included in the “Toxic Ten.” Journalist Alex Berenson also recently disclosed that the government pressured Twitter to ban him in 2021.