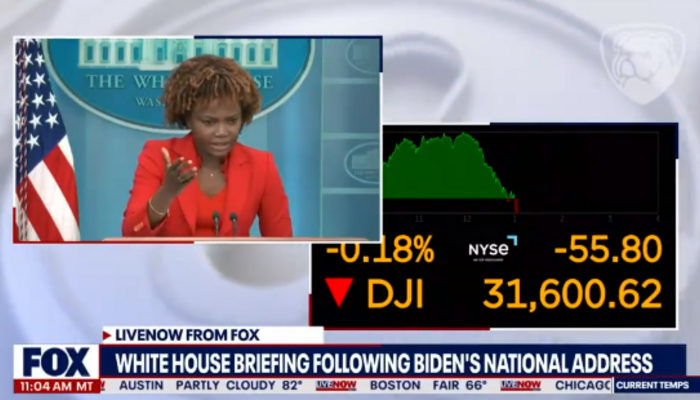 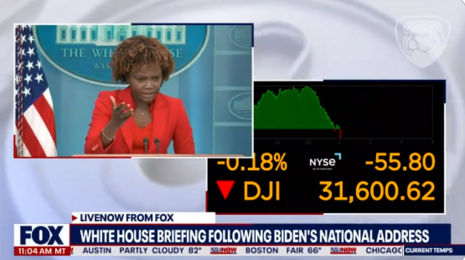 Jean-Pierre asked Lawrence to repeat his question. Lawrence did, adding, “How much coordination is there between the administration, um, and social media companies?”

Jean-Pierre then stammered, “So, I–I–I don’t have anything to–to share with you on that, and I’m not going to comment on–on that right this time.”

This is striking in light of Missouri Attorney General Eric Schmitt’s revelations yesterday of a vast “censorship enterprise” between Big Tech platforms and the federal government in colluding to censor Americans’ free speech online.

Based on this information, the White House worked with at least two tech platforms to censor. So, why did Jean-Pierre have no answer?

Schmitt’s information came from documentation obtained through discovery requests and subpoenas of a lawsuit Schmitt and Louisiana Attorney General Jeff Landry filed in May against Biden administration officials for coordinating with social media companies to censor speech. The documentation showed coordination between Facebook and Twitter and multiple government agencies to censor posts about COVID-19 and other topics.

Schmitt and Landry’s lawsuit cited original research from Media Research Center and its unique CensorTrack database to support its underlying allegations. MRC Free Speech America in April published its findings of 646 cases in CensorTrack of pro-Biden censorship between March 10, 2020, and March 10, 2022.

Skyrocketing Gender Dysphoria in Children Is Unnatural
To the Parents of Trans Kids: Lobotomies Were Once a Fad, Too
ABC, CBS & NBC Omit Debt Under Biden Soaring to 31 Trillion Dollars
Are the Undersea Cables We Depend on Vulnerable to Russian Sabotage?
AOC claims that ‘Abortion rights are a class struggle too’