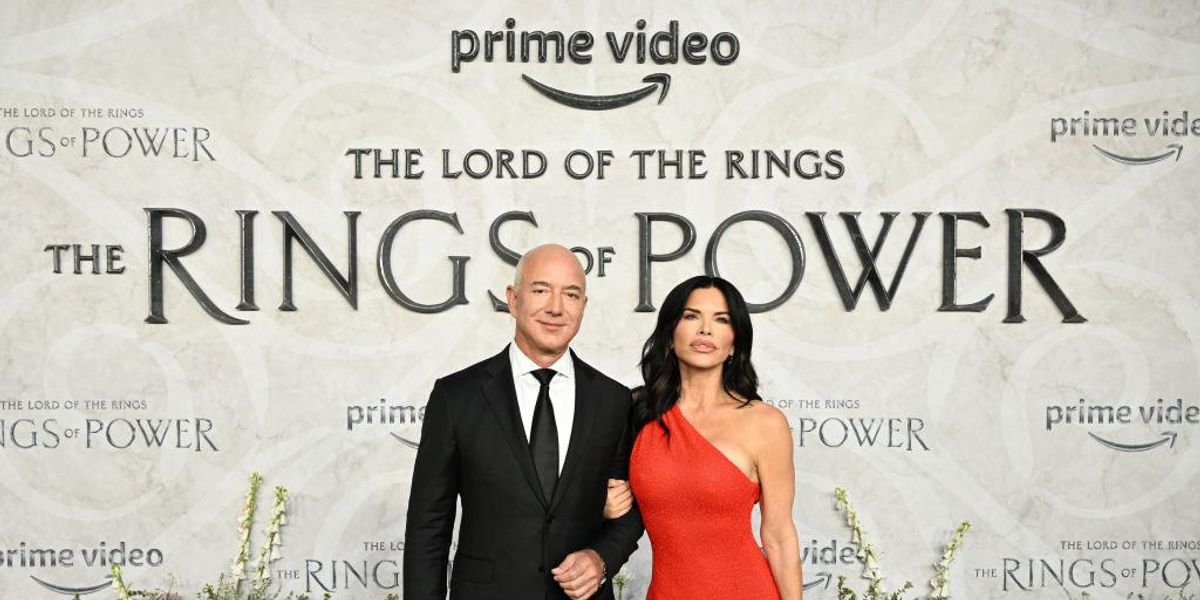 Amazon spent roughly $465 million on “The Lord of the Rings: The Rings of Power,” a spin-off loosely based on J.R.R. Tolkien’s fantasy series. With the costs of marketing and the prospect of an additional season factored in, Jeff Bezos’ streaming service is poised to potentially shell out closer to $1 billion.

Despite spending a fortune on a beloved intellectual property, Amazon has recently discovered that there was no buying off its fan base.

According to votes on IMDb, Rotten Tomatoes, and other review-aggregation websites for television shows and films, audiences are panning the series, which launched on Amazon Prime Video on September 2.

As of Monday, “The Rings of Power” has a 39% audience score on Rotten Tomatoes, netting an average rating of 2.4 stars.

The show was similarly reviled on Metacritic, where it received a 1.9 user score expressing “overwhelming dislike.”

Noticing a trend, which some have termed “review bombing” (in which users give a show a rating that does not comport with mainstream reviewers’ assessments), Amazon disabled reviews of the series on its main site.

Forbes reported that the censorship of reviews on Amazon may have been a strategic move — to hide from prospective viewers indicators that the show is perceived to be no good ahead of its premier.

The Wrap’s Brian Welk suggested the censorship was necessary to “fend off Internet trolls” and “racially intolerant admirers of J.R.R. Tolkien’s books attacking the show for its diverse casting.”

The Hollywood Reporter similarly ran a defense of Amazon’s production and an attack on its critics, claiming that virtually all of the backlash to the show is racially motivated. Fans who are opposed to the filmmakers’ transmogrification of Tolkien’s world or are critical of the “‘evil’ ethics of Amazon and Jeff Bezos” are allegedly rationalizing their racism.

These claims that the mass of bad reviews are in bad faith and have a socio-political motivation echo those issued after the all-female 2016 “Ghostbusters” reboot tanked. Director Paul Feig blamed the “anti-Hillary Clinton movement” for helping fuel the overwhelming antipathy for his 2016 spin-off starring Melissa McCarthy and Leslie Jones.

Notwithstanding the allegations that fans are not warmly receptive to the show because they are racists, there has been some legitimate concern expressed about the creative license taken by the show’s creators.

“The Rings of Power” serves as a prequel series to “The Hobbit” and the three titles composing the “Lord of the Rings” trilogy, which Amazon secured the television rights to in 2017. The trouble for some fans is that the history underpinning these titles was well established and explored in Tolkien’s “The Silmarillion” (compiled by his son and released posthumously), “Unfinished Tales,” and “The History of Middle-earth.” Amazon does not have the rights to these intellectual properties.

Since Amazon lacks the rights to these world-defining properties, what details about Middle-earth’s past the show’s makers could not extrapolate from the IPs they had access to, they otherwise had to make up or change.

Inauthenticity is not the only justification other than racism for a negative review. Quality is also a concern.

While Slate’s Laura Miller wrote that the show bears a “flawless” resemblance to director Peter Jackson’s trilogy, she wrote that the screenwriting is “uneven” and full of both “shopworn pop-culture tropes” and “lines that sound like they were directly lifted from dozens of other movies.”

Despite the negative feedback, “The Rings of Power’ was nevertheless viewed by 25 million viewers globally within the first 24 hours of its initial release.

Having It Both Ways on the Pandemic
Whoopi Goldberg defends embarrassing Biden moment when he calls for politician who died a month ago
Would Biden Run in 2024 Without Kamala Harris?
The Fed Is Piloting a Chinese-Style Social Credit Score–And Your Bank May Be In on It
Politico’s founding editor calls for rewriting of Constitution to prevent 2024 Trump win