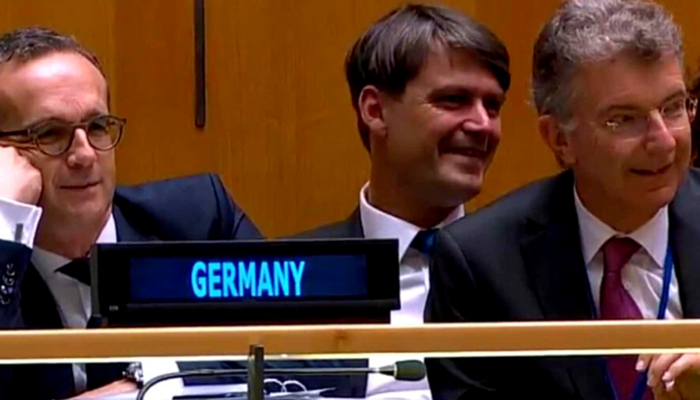 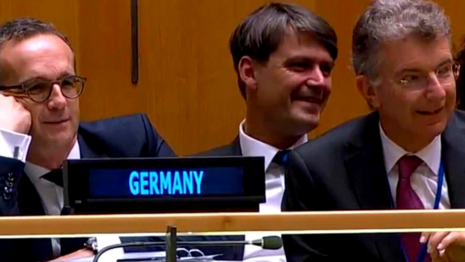 In 2018 President Donald Trump spoke before the United Nations General Assembly and specifically warned Germany about relying on Russia for their natural gas. At the time not only did the German delegation appear to laugh at Trump but much of the media joined in the mirth. Among those news organizations was CBS News which joined in the mockery with this September 25, 2018 article by Kylie Atwood: Why were UN diplomats laughing at Trump?

When President Trump took to the world stage at the United Nations General Assembly (UNGA) on Tuesday, he unintentionally drew laughter from diplomats in the room.

“In less than two years, my administration has accomplished almost more than any other administration in the history of our country,” Mr. Trump said.

A slow rumble of laughter spread throughout the chamber. “Didn’t expect that reaction, but that’s OK,” Mr. Trump said in response.

Yes, it was very funny to those delegates and to CBS News but that laughter was followed up by yet more due to Trump’s prophetic warning to Germany:

“Germany will become totally dependent on Russian energy if it does not immediately change course,” Mr. Trump said. “Here in the Western Hemisphere, we are committed to maintaining our independence from the encroachment of expansionist foreign powers.”

Even as he took a swipe at them, German diplomats were seen laughing in the audience.

And here is Atwood’s concluding analysis:

In the case of Germany and Russia, Mr. Trump was referring to the Nord Stream 2 pipeline, an expansion to an already existing natural gas pipeline. The permits have been issued, however, and experts say it would be hard to see anything that could stop it at this point. And while Germany will have an increased reliance on Russia, natural gas makes up about 25 percent of Germany’s energy consumption, so saying that the country will become “totally dependent” on Russia is a stretch.

So how did that work out? Dependence doesn’t need to be total to create a serious squeeze. Let us flash forward to a very different take on this by CBS News on September 2, 2022 in “As Russia turns off the gas, can Germany and its EU neighbors stay warm this winter?”

Berlin — Russia stopped delivering gas through the Nord Stream 1 pipeline (NS1) that supplies much of western Europe on Wednesday, claiming a two-day shutoff was necessary for maintenance work. On Friday, just hours before it was due to reopen, Russia’s state-owned company Gazprom said repairs now require it to “suspend further operation.”

The move will pile pressure on the continent’s largest economy as it prepares for a winter of energy rationing that could squeeze households and German industry.

…So, while gas security may not be an immediate concern for the governments of Europe this winter, even if Russia keeps the tap turned off, many people and businesses will struggle to afford the fuel that’s available.

So who’s laughing now? The German UN delegation? CBS News? Kylie Atwood? Oh, the latter moved to CNN where she is now a National Security Correspondent. Can we expect more belly laughs from her?

Startup developing jet fuel from carbon emissions reaches deal with Microsoft and Alaska Airlines
Remember Back When Journalists CARED About the Politicization of the FBI?
NewsBusters Podcast: A Buzzkill for the ‘Festival of Fact-Checking’
Policymakers Can Only Watch as Russia Threatens an America With a Doddering Old Fool at the Helm
AOC claims that ‘Abortion rights are a class struggle too’