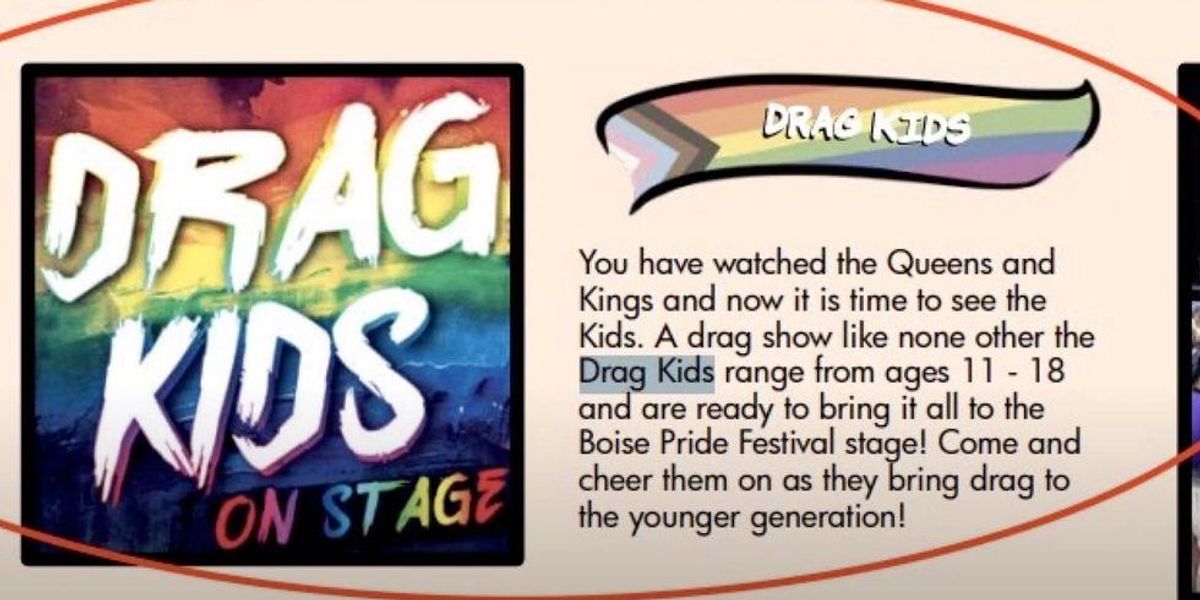 The Boise Pride Festival has lost at least one sponsor after online outrage over the inclusion of a “drag kid” show featuring children as young as 11 years old.

“You have watched the Queens and Kings and now it is time to see the Kids,” read the advertisement for the event. “Come and cheer them on as they bring drag to the younger generation!”

“I call on all concerned Idahoans — and the lobbying groups that represent many of these out-of-state businesses who seek tax benefits and subsidies from our legislators, including IACI — to disavow this attack on Idaho’s children and to invest their sponsorship dollars in the Boise Rescue Mission that serves families, women fleeing abuse, and disadvantaged children. Children should be given the chance to live out a childhood free from violence, hunger, and the sexual appetites of adults,” read the statement from Moon.

In response, Zions Bank pulled out of its sponsorship of the pride festival.

“When we committed to our sponsorship of this year’s Boise Pride event, we were unaware of the event’s activities involving children/minors,” the bank claimed in a statement.

“Since learning of these specific activities,” it continued, “we have made the decision to withdraw our participation in this year’s Boise Pride event and have communicated this to the event organizers.”

Critics of the event called for the public to pressure the other sponsors, including Albertson’s, Jack Daniels, Wells Fargo, Mike’s Hard Lemonade, Tito’s Vodka, and numerous other brands.

Donald Williamson, a spokesperson for the Boise Pride Festival, denied that the drag event would be sexualizing children.

“The drag kids performance is a celebration of self-expression and confidence,” said Williamson to KTVB-TV. “The only perversion and sexualization of this performance are coming from extremists and people like Dorothy Moon, who are twisting it into something that it is not.”

Williamson also claimed that sexualization is not unique to drag performances and argued that every Top 40 music video had the kind of sexualization that conservatives were opposing in drag.

“They don’t bat an eyelash to that!” he claimed.

“This performance is not the first time these kids have done this,” Williamson continued. “They have done this at other venues as well.”

He went on to state that the parents of all the drag kids were supportive of their performances, and one mother of a drag child even performs on stage alongside them.

The drag kids show is scheduled for Sunday at the Boise Pride Festival.

Here’s a local news report about the public furor: