Boy, if Hillary Clinton is tired of “but her emails,” she should see me. She has nothing on how tired I am. But the topic just won’t go away and in no small part because she won’t stop bringing it up.

I guess at her age, you tire quickly.

I can’t believe we’re still talking about this, but my emails…

As Trump’s problems continue to mount, the right is trying to make this about me again. There’s even a “Clinton Standard.”

The fact is that I had zero emails that were classified.

Of course, she may be tired of it, but that doesn’t stop her from flogging her “But Her Emails” merchandise.

Every “But her emails” hat or shirt sold helps @onwardtogether partners defend democracy, build a progressive bench, and fight for our values.

So let’s look back a little.

I’m going to assume you all remember the Benghazi incident, so I won’t go back over it. The gist is that while Hillary was Secretary of State, four Americans, including the Ambassador to Libya, were murdered in a completely spontaneous mass attack with heavy weapons supposedly sparked by an obscure YouTube video that had a few dozen views. But as part of the investigation, the committee discovered that, instead of using secure State Department email, she had set up a bootleg email server under the domain clintonemails.com and ran all her work emails through that.

Her communications were subpoenaed; she released 30,000 or so, but not until she had unilaterally deleted 33,000 as “personal,” followed by having her trusted aides destroy their phones with hammers and running a commercial secure-deletion app (BleachBit) to clean her server disks so nothing could be recovered.

It’s open source too. What do you want to bet she didn’t even tip the developer?

Important phrase there: after the subpoena. A mere mortal, unprotected by Democrat Privilege, would have gone to jail for that alone.

Anyway, let’s run through some of her excuses.

Hillary: None of her emails were classified. Comey said so.

Okay, the short version of this is: that is b— — nonsense.

Here are some highlights:

Hillary’s statement that none of her emails were classified was just a flat lie. But it also reminded me of something else — at about the same time (May 2016), a submariner named Kristian Saucier pleaded guilty to “unauthorized detention of defense information” for taking pictures of his work area near the submarine’s reactor. Those pictures properly should have been marked Confidential.

Thanks to a plea deal, Saucier was only sentenced to a year in prison, six months of monitored home confinement as part of three years of supervised release, and an other-than-honorable discharge. He was potentially exposed to five to six years of prison time and a dishonorable discharge.

Because I’m shameless, I’m going to quote my own tweet that set me off on this:

It should not be forgotten that at the same time James Comey declared that Hillary couldn’t be prosecuted for TS//SCI and TS//TK on an unsecured server and a pervert’s laptop, a poor enlisted submariner got six months prison for one photograph classified confidential

(I know I tweeted “six months” instead of “one year.” I remembered the parole instead of the prison time.)

Hillary: Nothing was marked classified.

Oh, and guess whose responsibility it is under the controlling executive order to ensure that classified paternal is properly marked? That authority for the State Department is delegated to … wait for it … the Secretary of State.

So if it wasn’t properly marked, Hillary is the responsible authority.

I worked in a SCIF for years (at the time, our slang was “tank,” but I understand that’s just for old fogies now).

SCIFs are weird. (This is a CNN story with a picture of Trump’s SCIF.) Obviously, they have no windows; mine was two floors below ground level. Desk phones had push-to-talk buttons so no one might overhear a random conversation. Compulsory background music was provided on special tape cassettes provided by someone and played over special players. We had two cassettes: one was Christmas music, and the other one wasn’t.

Most importantly, there were no network connections whatsoever out of the SCIF. Not only that but the electric power was specially filtered so that no data could be passed covertly over the power lines.

The effect is what’s called an “air gap.” You can’t (easily) pass information electronically from SCIF world to the real world. So the material Hillary had in her emails that was SCI was either:

In Hillary’s case, it was more sneaky: have someone make a copy with the labels removed. 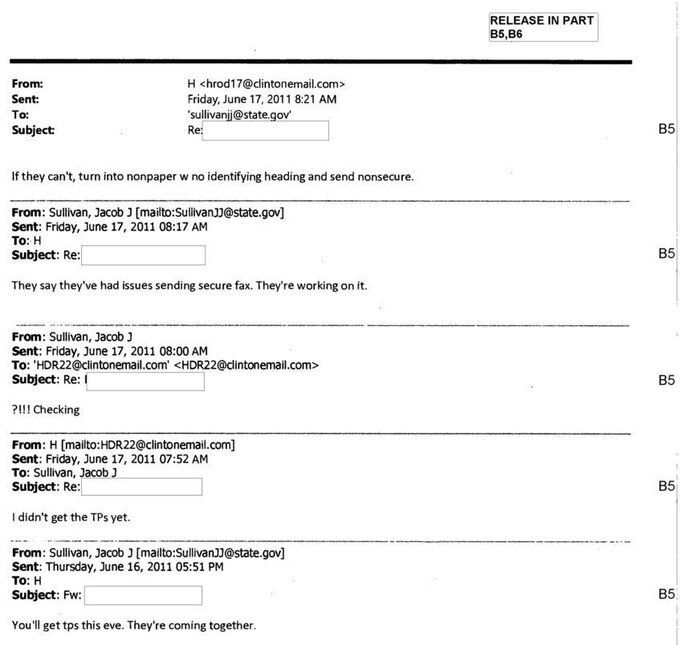 I don’t know how to minimize this. A mere mortal doing this would face serious jail time.

This has gone on a little longer than I would like, but I wanted to get at least the important details. The point is that, basically, Hillary is lying, full-throated operatically lying. Not only should she have gone to jail, but she should also still be in jail.

So, of course, she can’t stop lying about her emails. At this point, she would have to admit to herself that she committed a crime.

Remember that when people talk about Trump’s “stolen documents.”