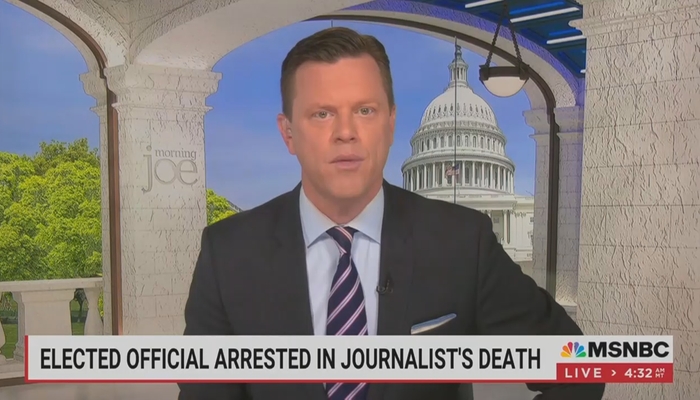 A favorite liberal-media theme is that Donald Trump and Republicans at large, by criticizing the media, have endangered the lives of journalists.

So imagine if a Republican elected official had actually been charged with murdering an investigative journalist who had exposed his wrongdoing!  Entire special shows would be dedicated to the news! “Tonight on MSNBC: Journalism Under Murderous Republican Attack!”

But let a Democrat elected official be accused of murdering a journalist who had written stories exposing his misconduct, and MSNBC, in the case of Morning Joe, not only gives the story short shrift, but, incredibly, never discloses that the suspect is a Democrat.

The case in question is that of the murder of Las Vegas Review-Journal investigative reporter Jeff German, who was found stabbed to death last week. Clark County public administrator Robert Telles has been arrested and charged with German’s murder.

Morning Joe devoted a scant 47 seconds to the story on Thursday. And though Willie Geist mentioned that Telles had lost his re-election primary, he didn’t let viewers know that it was a Democrat primary, or otherwise disclose that Telles is a Democrat.

Making Morning Joe‘s omission particularly outrageous is that in 2019, Joe Scarborough and Mika Brzezinski accused Trump of intentionally endangering Scarborough’s life by making someone who had put Scarborough on a “kill list” eligible for bail. This despite MSNBC’s own legal expert explaining that the government actually argued forcefully for the suspect to be detained, but that the judge in the case ruled against it because there was no underlying crime charged that prohibited bail.

CNN’s New Day did a better-if-not-great job. Its six-o’clock hour devoted over three minutes to the story. And though it was buried deep in the segment, CNN did get around to mentioning that Telles is a “Democratic politician.”  If Telles had been a Republican, it’s fair to imagine that the story would have led with that fact.

And in its online article on the subject, CNN also buried the fact that Telles is a Democrat. CNN waited until the 16th paragraph to mention that Telles had lost his “Democratic primary.” Even that fell short of clearly identifying Telles as a Democrat. Non-Democrats are known to enter Democrat primaries: see, Sanders, B.

CNN would have been guilty of the worst kind of hypocrisy and double standard had it failed to identify Telles as a Democrat.  As Kristine Marsh has noted, CNN’s Jim Acosta, a raging Trump antagonist, warned of a coming day of ”a dead journalist on the side of the highway, because of the rhetoric coming out of the White House from the President of the United States.”

Acosta has also accused Trump of creating “an atmosphere where people can get hurt, where journalists can get murdered.”

Morning Joe failing to disclose that murder suspect Robert Telles is a Democrat was sponsored in part by 4Imprint and Subway.

Here are the transcripts.

WILLIE GEIST: A public official in Las Vegas has been arrested on suspicion of killing a renowned investigative journalist in the city. Jeff German, a reporter at the Las Vegas Review Journal, was found stabbed to death outside of his home last week.

Yesterday, police arrested a man named Robert Telles. He’s the Clark County public administrator. That came after an hours-long standoff at Telles’ home. Telles had been the subject of several investigative pieces written by German, and recently lost his primary in the wake of their publication.

Police may release more information on the possible motive this morning. The Clark County DA telling the Review Journal, Telles is facing murder charges. NBC news has reached out to Telles for comment. He is scheduled to appear in court this afternoon, Mika.

JOHN BERMAN: Overnight, a stunning development in connection with the deadly stabbing of a veteran investigative reporter in Las Vegas. The local elected official who had been the subject of reporting is now charged with his murder. CNN’s Josh Campbell is live in Las Vegas this morning. Josh, nice to see you. What’s the latest on this case?

JOSH CAMPBELL: Good morning to you, John. There is so much yet to be learned about the motive in this brutal killing here in Las Vegas. Perhaps questions that only the perpetrator can answer. But one thing is certain and coming into focus, the more we learn, it appears that this acclaimed local investigative reporter may have been targeted for doing that most basic function of journalism, holding the powerful to account.

A stunning arrest in Las Vegas, Clark County public administrator Robert Telles was taken into custody Wednesday and charged with murder in connection with the fatal stabbing of Las Vegas Review Journal reporter Jeff German. German was found with multiple stab wounds outside his home Saturday morning. In May, German filed an investigative report on Telles’ office, reporting it was mired in turmoil and internal dissension over the past two years, With allegations of emotional stress, bullying and favoritism leading to secret videotaping of the boss and a co-worker outside the office. Telles denied the accusations, but the following month he lost his primary bid for reelection. The Review Journal reported German was working on another story at the time of his death.

Now, John, police aren’t commenting on why this local Democratic politician, Rober Telles, is being held, but we can glean from online county jail records that he’s being held on suspicion of murder. We’re told that his first appearance in court will be this afternoon. John?

BERMAN: Quite a story. Our thoughts go out to the reporter’s family and to the newspaper. Josh Campbell, thank you so much for being with us this morning.