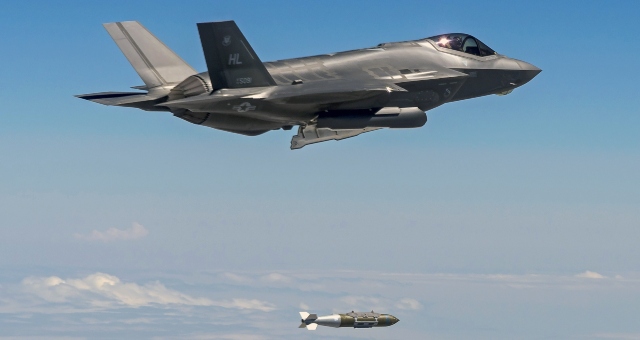 (Natural News)
The Pentagon has halted production of the world’s most expensive — and some say advanced — fighter jet after technicians and engineers found that a component used it the plane contained a Chinese alloy, in violation of federal law.

The Defense Department said it is halting further deliveries of the Lightning II to customers including the U.S. Air Force and U.S. Navy after finding the Chinese-sourced rare-earth alloy in magnets for pumps used on the fighter.

Goemaere did say, however, that the Chinese alloy is not going to disrupt current operations involving F-35s currently forward deployed with the U.S. military and global partners because “the magnet does not transmit information or harm the integrity of the aircraft and there are no performance, quality, safety or security risks associated with this issue.”

He went on to say that the DoD F-35 program office “found an alternative source for the alloy that will be used in future turbomachines.

“We are working with our partners and DoD to ensure contractual compliance within the supply chain … and are working with the DoD to resolve the issue as quickly as possible to resume deliveries,” Lockheed Martin, the aircraft maker, told Bloomberg.

A Congressional Research Service report found that F-35s use about 920 pounds of rare earths per plane, mainly for electronic warfare sensors, electrical power systems, and magnets.

The US relies heavily on Asian countries for 80% of its rare-earths needs. There have been moves by the Biden administration to increase domestic supply chains as a priority to mitigate if China were to impose an export ban on US defense companies.

Rare earths are also central in manufacturing night vision goggles, precision-guided missiles, and drones. On the civilian side, metals are critical for electric vehicles and smartphones.

Bloomberg News noted that the Defense Contract Management Agency and the F-35’s program office referenced a U.S. law as well as a Pentagon acquisition policy regulation that forbid the use of certain specialty materials from “covered countries” that are listed in the Defense Federal Acquisition Regulation series. Besides China, those countries include Russia, North Korea, and Iran. It’s not clear when the contract agency discovered the violation but the office reported it on Aug. 19.

“The turbomachine integrates the aircraft’s auxiliary power unit and an air cycle machine into a single piece of equipment that provides electrical power for ground maintenance, starting off the main engine and emergency power,” the outlet reported.

Adam Kress, a spokesman for Honeywell, noted in a statement to Bloomberg News that the company “remains committed to supplying high-quality products that meet or exceed all customer contract requirements” and is “working closely with DoD and Lockheed Martin to ensure that we continue to achieve those commitments on products Honeywell supplies for use on the F-35.”

In February, the Department of Energy announced an investment plan to bolster American production of rare earth minerals in an effort to move away from Chinese sources.

“Applying next-generation technology to convert legacy fossil fuel waste into a domestic source of critical minerals needed to strengthen our supply chains is a win-win — delivering a healthier environment and driving us forward to our clean energy goals,” said Secretary of Energy Jennifer M. Granholm. “With the Bipartisan Infrastructure Law’s investment in the build out of this first-of-its kind critical minerals refinery, we are moving ideas from the lab to the commercial stage and demonstrating how America can compete for the global supply chain to meet the growing demand for clean energy technology.”

There is no time to waste on this.