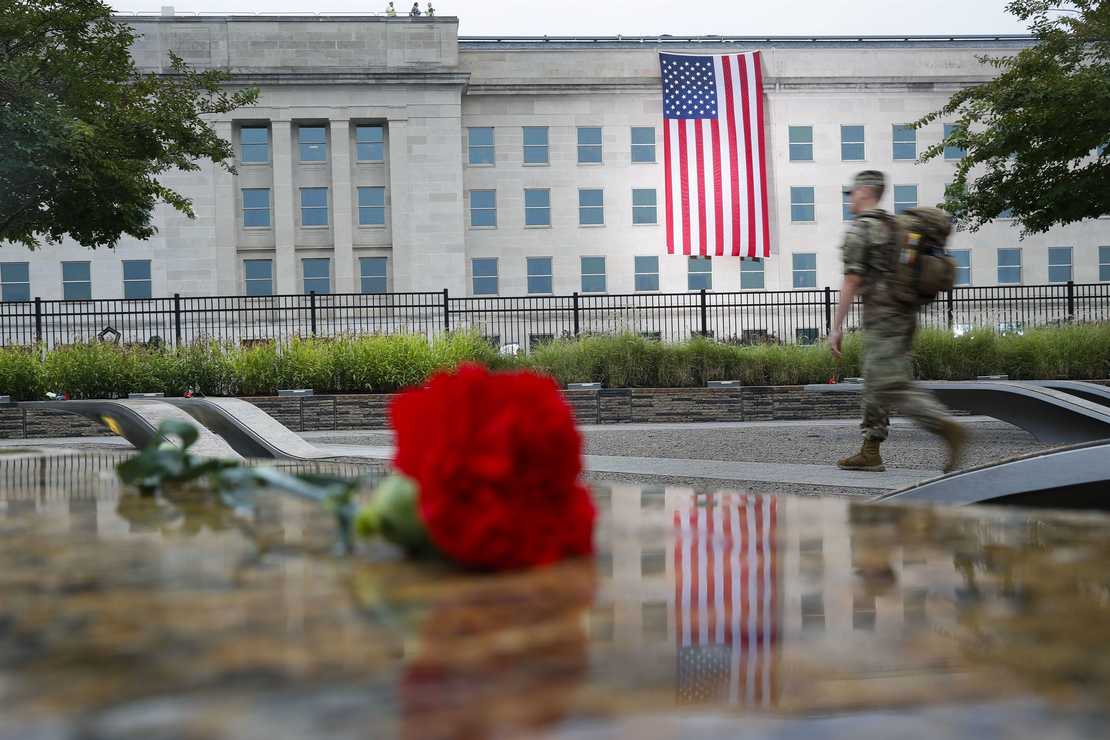 Old Joe Biden read off his teleprompter at the 9/11 Memorial Ceremony at the Pentagon Sunday, and his speech was filled with the usual pious blather about how much he admires the heroic first responders who never cross his mind on the other 364 days of the year. In the course of his semi-coherent meanderings, which WhiteHouse.gov had to clean up with several strikethroughs and corrections in the official transcript, Old Joe informed us what the “greatest lesson of September 11” was. Was it that death can come at any moment, so we should value life and cherish our loved ones? Not even close. Was it that we should be willing to pay any price to ensure that free societies survive and prosper? This senescent authoritarian wasn’t about to say that. No, Biden’s “greatest lesson of September 11” was that we must not be unkind to Muslims. Yes, really. And indeed, we shouldn’t. But is that really the primary takeaway from the murder of nearly 3,000 people by Islamic jihad terrorists?

Biden declared, “I hope we’ll remember that in the midst of these dark days, we dug deep, we cared for each other, and we came together. You know, we regained the light by reaching out to one another and finding something all too rare — a true sense of national unity.” Yes, we did. In fact, the national unity this nation experienced after that terrible day was truly remarkable, and would likely not be possible twenty-one years later, in an America in which the alleged president of the United States has said that half of the nation’s population represents “an extremism that threatens the very foundations of our republic.”

But Old Joe, the greatest destroyer of national unity since his fellow Democrat Jefferson Davis, purported to discover the principal meaning of 9/11 in that brief unity. “To me,” he continued, “that’s the greatest lesson of September 11. Not that we will never again face a setback, but that in a moment of great unity, we also had to face down the worst impulses, fear, violence, recrimination directed against Muslim Americans, as well as Americans of Middle Eastern and South Asian heritage.” There is no doubt about it: no innocent Muslim, or any innocent person, should ever be subjected to anyone’s “worst impulses” or made to feel “fear” or to suffer “violence” and “recrimination.” That should have been taken for granted.

Biden’s anxiousness to emphasize it, however, recalled the similar solicitude of George W. Bush. On September 17, 2001, Bush appeared at the Islamic Center of Washington, D.C., in the company of several prominent Muslim leaders, and said, “These acts of violence against innocents violate the fundamental tenets of the Islamic faith. And it’s important for my fellow Americans to understand that. … The face of terror is not the true faith of Islam. That’s not what Islam is all about. Islam is peace. These terrorists don’t represent peace. They represent evil and war.”

As Americans still searched the smoking ruins of the World Trade Center for the remains of their loved ones, President Bush cautioned them against thinking ill of Muslims, as if the 9/11 attacks had been perpetrated by Americans targeting Muslims rather than by Islamic jihadis targeting American landmarks and civilians: “Women who cover their heads in this country must feel comfortable going outside their homes. Moms who wear cover must be not intimidated in America. That’s not the America I know. That’s not the America I value. I’ve been told that some fear to leave; some don’t want to go shopping for their families; some don’t want to go about their ordinary daily routines because, by wearing cover, they’re afraid they’ll be intimidated. That should not and that will not stand in America,” said Bush.

These remarks were extremely curious. Muslims were not at that time or at any point subsequently being subjected to wholesale vigilante attacks in the United States. Yet Bush was by no means alone. Political leaders all over the West echoed his words about Islam being a religion of peace, having nothing to do with terrorism. After September 11, this became commonplace in Western political discourse, rejected only by a small minority, who were quickly stigmatized as cranks.

Bush’s speech set the pattern. After every jihad attack, non-Muslim leaders have followed his example, making it their highest priority to affirm that Islam is peace and that Muslims are victims. Bush deformed the West’s response to the resurgent jihad and poisoned the public discourse so that attempts to discuss this problem honestly are consigned to the realms of “Islamophobia” and condemned by all right-thinking people. Biden’s 9/11 speech this year was just a hollow echo of Bush’s, just as the man’s entire presidency is a hollow echo of the same tired statism and class warfare rhetoric we endured during sixteen years of Bill Clinton and Barack Obama. Everyone has internalized the message by now: Muslims are the true victims of 9/11 and all jihad terror attacks. Now go back to sleep until the next one.