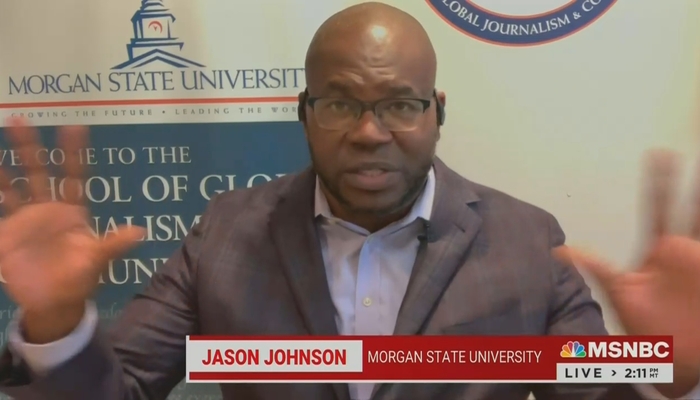 There are lies, damned lies, and MSNBC.

On Nicolle Wallace’s MSNBC show this afternoon, MSNBC contributor and journalism professor Jason Johnson got off the whopper to end all whoppers. He said:

“If you believe the story, which I do, that [Biden] said, I had no intention of running for president.  “He was, he was the retired war hero out in the mountain, chopping wood. Charlottesville brought him back into the fight that he never thought he’d have to fight again.”

Fact: Biden never served in the military, let alone having been a “war hero.” He got four draft deferments for “asthma.”

When it came to being a war hero, perhaps Johnson was confusing Biden with President George H.W. Bush. In World War II, he enlisted on his 18th birthday, and became the youngest naval pilot. He was shot down in the Pacific and tried his best to rescue his comrades.

As for “chopping wood,” that’s something President Ronald Reagan did. And President George W. Bush, who was also a pilot in the Air National Guard, was famous for clearing brush at his Texas ranch. Biden’s the “hero” of sniffing hair.

Johnson was buttering up Biden for a few sentences, and then complained the speech had “no teeth” and not enough specificity on Republican acts of hate. Later, he complained Biden was for funding the police, which he argued is stuffed with “white nationalists.”

NICOLLE WALLACE: Jason Johnson is already here, though, politics and journalism professor at Morgqn State University. Also an MSNBC contributor. Jason Johnson, Susan Bro saying that the president was following through on a promise, the campaign promise, which is certainly an interesting bookend to his candidacy today.

JASON JOHNSON: Yes, I mean, this is something that Joe Biden has believed in. And if you believe the story, which I do, that he said, like, I had no intention of running for president, he was the retired war hero out in the mountain, chopping wood, and Charlottesville brought him back into the fight that everyone thought he’d have to fight again. And I found that to be charming and engaging.

And I’ve always thought that Joe Biden is a good moral leader when it comes to these issues.

Brutal Mexican massacre leaves 20 dead near Acapulco, including mayor whose father may have been in league with the gang responsible
Teen delinquents running wild on NYC block in middle of day, firing fake guns, openly smoking pot — and cops, school allegedly aren’t doing anything about it
Policymakers Can Only Watch as Russia Threatens an America With a Doddering Old Fool at the Helm
Democrat DC deputy mayor for ‘public safety and justice’ busted for assault and battery
Former police officer allegedly massacred dozens of toddlers at Thailand day care facility, at least 37 dead: Report