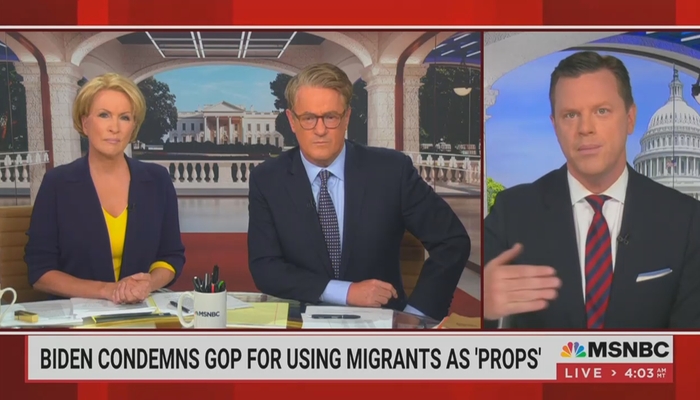 On today’s Morning Joe, saying that it’s possible for two things to be true at once, Joe Scarborough admitted that there is a border crisis, even describing a “torrent” of migration “coming across the border in a very uncontrolled, unsafe way that creates a humanitarian crisis.”

But at the same time, Scarborough repeatedly accused Republicans of “grotesque” human trafficking, for their practice of sending migrants to northern locations.

Speaking of two things being true at once, Willie Geist [who agreed with Scarborough about the “grotesque” nature of the Republican migrant relocations], got off the line that was simultaneously the most amusing–and most deceptive–of the segment. He criticized the  Republicans [it was Florida Gov. Ron DeSantis] for putting migrants on a plane and then dropping them “on an island off the coast of Massachusetts.”

You’d have thought the migrants were being stranded on a barren rock in the ocean. Willie never mentioned that the island in question is Martha’s Vineyard, the tony isle second in elitism only to Scarborough’s favored island summering spot: Nantucket.

But Geist did call out VP Kamala Harris for having recently claimed that the border is “secure.” Countered Willie: “It objectively is not secure.”

JOE SCARBOROUGH: You know, Willie, what people say about our show is, that that Morning Joe show is the most mindful show, where we teach everybody that two things can be true at one time.

MIKA BRZEZINSKI: Okay, but we’re not always that mindful.

SCARBOROUGH: We’re going to be talking about that. We’re going to be talking about the crisis at the southern border. And by the way, I understand that every two years, yes, there’s the convoy, the convoy stories from certain networks, of lepers coming to the States, and it’s always ridiculous. It’s always timed for elections every two years. Just like clockwork.

So that’s the truth on one of our hands. Truth in the other one, on the other one is the fact that you have some politicians that are engaging in political human trafficking. Grotesque.

SCARBOROUGH: Getting migrants who have, have, have come from their countries with kids, putting them on buses —

SCARBOROUGH: — and taking them up outside the Naval Observatory in Washington, D.C., and just dropping them off to make a political point with lives. And it’s just, it’s yet another example, I think most Americans are like me. I want order at the southern border. I don’t think people should come in illegally.

But it is grotesque to grab these people, throw them on buses, drive them up to, to, to Washington, D.C., and just drop them outside of an official residence, the Vice President’s residence. It’s, it’s grotesque what they’re doing with these human beings. This is political human trafficking.

WILLIE GEIST: Well, with that, Joe, how about telling a group of desperate people who have arrived in the United States, get on this plane, we’re sending you to New York or Boston where you will be well taken care of. They’re better equipped there to look out for you, they’ll have jobs and a new life for you.

And then being dropped on an island off the coast of Massachusetts, an island that was given no warning, by the way, that these people were coming. So yes, grotesque is the word for that.

And as you say, though, Joe, we are going to cross two million border encounters —

GEIST: — two million people coming across the border. That’s an all-time record by a long shot. So, it is a crisis. Vice President Harris said to Chuck Todd a few days ago that the border is secure. It objectively is not secure. So, there’s a problem. The question is now how to go about fixing it.