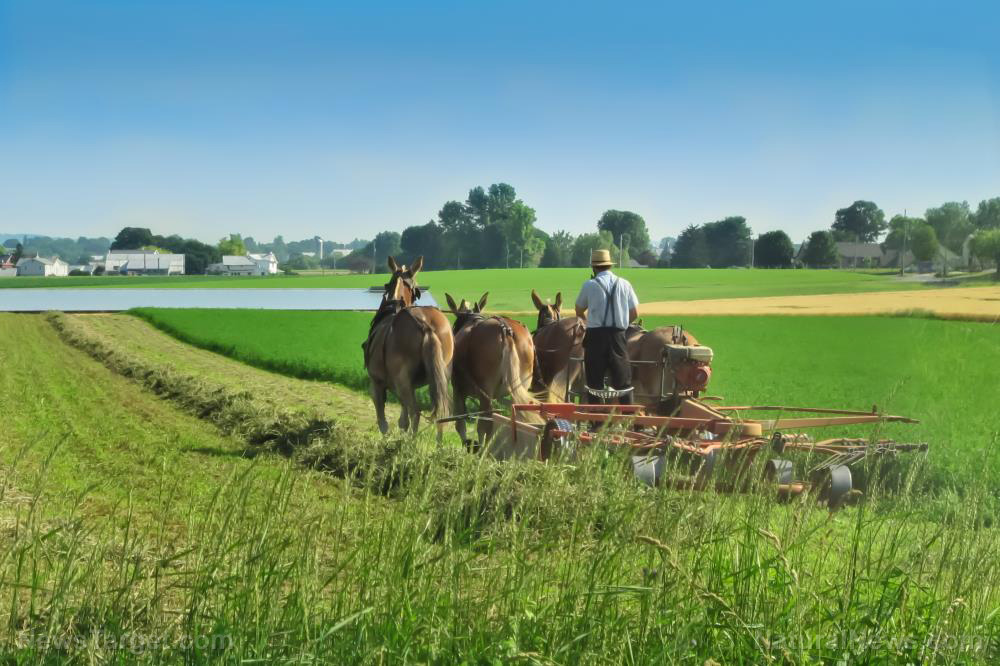 (Natural News)
After two people supposedly – emphasis on the word supposedly – got sick from raw milk he provided to his private buyers’ club, Amish farmer Amos Miller of the Bird-in-Hand, Penn.-based Miller’s Organic Farm is now being relentlessly terrorized by the United States government.

According to reports, the U.S. Department of Agriculture (USDA) just will not leave Miller alone, despite the fact that he has thousands of happy buyers who have never had any problems with his organic raw milk, eggs, grass-fed beef, cheese, and fresh produce.

Like many Amish farmers, Miller does not use chemical pesticides or even fertilizers. He also does not use gas-powered or electric-powered everything, choosing instead to do things the old, natural way.

Miller’s traditional methods were serving him and his buyers well until taxpayer-funded goons from Washington, D.C., decided to interfere with his operation. Now, he faces fines and even jail time for non-compliance with the government’s demands.

“They use it as a medicine,” Miller said back in 2021 during an interview about his farm, his buyers, and the foods they buy and consume. “It’s very healing to the body because it’s raw.”

One of Miller’s customers is also quoted as saying that Miller’s Organic Farm is “good people” and that the “place is very clean, and their produce is excellent.”

Then, out of nowhere in 2014, two people who consumed Miller’s products later tested positive for listeriosis, which was automatically blamed on his traditional farm. One of the individuals ended up dying.

Since then, the USDA has taken Miller to court for refusing to stop selling his goods – keep in mind that tens of thousands of people get sick and die every single year from lunch meat, lettuce, and other USDA-approved foods from corporate, chemical-based farms, and those never get harassed and shut down like this.

For nearly a decade, Miller has faced constant USDA harassment, and this year back in March a federal judge ordered him to stop selling all meat. That judge also authorized armed U.S. marshals to use “reasonable force” to gain access to Miller’s farm for routine inspections to ensure he is no longer selling meat. (Related: Back in 2012, the U.S. government destroyed the life of Amish farmer Dan Allgyer, also of Pennsylvania, for providing raw milk to customers.)

With all the news about covid and now the global energy crisis, stories like this often get overlooked – but not here. Natural News has always stood in the gap for good people like Amos Miller who become victims of the government’s relentless crusade against raw milk and other natural foods.

The Amish often get dubbed as an “uncivilized” people by ignorant city-dwellers, but in this case the uncivilized party is the USDA, U.S. marshals, and the federal judge who authorized this tyranny.

Miller has already gone through hell as it is, and now he faces losing his operation via the order to stop selling meat. As an Amish man who holds his beliefs near and dear to his heart, however, Miller takes his authority from God and not from corrupt governments – which is why his case deserves our attention and support.

“Have you ever noticed that the Amish rarely seek positions of political power? This isn’t an accident,” writes Patrick Carroll for FEE Stories.

“For them, the goal is simply to ‘live peaceably with all’ as the book of Romans puts it, ‘to live quietly, and to mind your own affairs, and to work with your hands’ as it says in 1 Thessalonians.”

Be sure to read the full story about Amos Miller and Miller’s Organic Farm.

The latest news about government tyranny against raw milk and other community-sourced foods can be found at Tyranny.news.