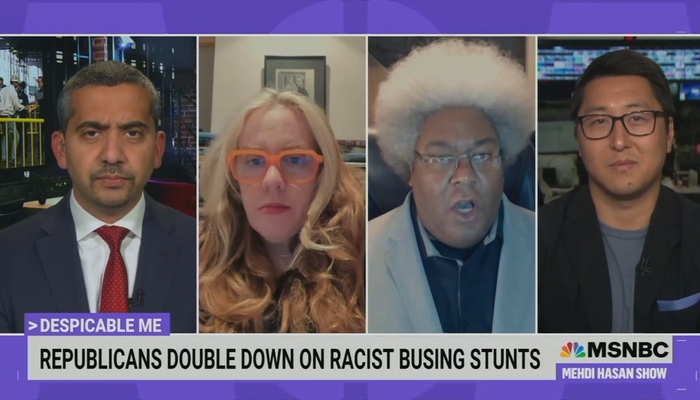 While real Americans were either getting ready to return to work on Monday or watching NFL games, MSNBC had dialed up a Sunday night episode of The Medhi Hasan Show with a panel fit for some sort of hall of fame for idiots that called for Governor Ron DeSantis (R-FL) to face “human trafficking” and “kidnapping” charges for flying illegal immigrants to the ultra-liberal, white vacation spot Martha’s Vineyard, Massachusetts.

Hasan set the table by claiming that Republicans aren’t actually Christians because, if they had accepted Jesus as their Lord and Savior, they knew He “wouldn’t be playing a glorified game of hot potato with babies” and “flinging unwanted brown people across the country.”

He added that DeSantis broke the law and if what he did was “not what most people would call kidnapping” or “human trafficking, I don’t know what is.” To address this, he said the federal government should use its full force to “see if there is a legal, crime case to be made” or risk more “brown families, brown children, brown babies [being] hurled…like political footballs.”

The Nation’s Elie Mystal was the main draw for this panel of kooks, but he first had to burst the bubble of his fellow nuts that “[n]ot every evil, sadistic, twisted, bigoted, racist thing these people do is illegal” because “some of those evil, sadistic, racist, bigoted things are just allowed in this country.”

That said, he said what DeSantis did seemed like “a violation of the federal kidnapping statutes” and akin to him luring children into a van and promising a trip to Disney World but wound up going to Williamsburg, Virginia.

He then called for DeSantis and fellow Governor Greg Abbott (R-TX) to face the Justice Department’s wrath:

Going to the second panelist in Molly Jong-Fast, Hasan again cast doubt on whether Abbott and DeSantis are safe from eternal fire: “What kind of person, let alone a self-proclaimed proud Christian, ships a newborn baby across the country like livestock, merely to make a political point, to own the libs?”

Jong-Fast responded with predictable disgust and an equally unsurprising take that argued DeSantis was worse than Trump and vaguely alluded to the former as a future genocidal maniac (click “expand”):

HASAN: I mean, the cruelty, the cynicism is unfathomable.

JONG-FAST: — is just to be as bad as you possibly can because the base loves it. And I don’t — I think that’s what’s scary because it doesn’t seem like there’s any kind of backing up happening and I think that — I almost feel like couldn’t the House have hearings and couldn’t there be more sort of investigations into sort of, is this okay?

The third and final member of this anti-hero rally was the sniveling turncoat Kurt Bardella, who argued Republicans want to focus on the supposed imaginary issue of illegal immigration because it’d distract from “their radical, extreme stance on abortion, their assault on women’s rights” and support for “mandat[ing] forced birth.”

Before ending with an aside about Q-Anon, Mystal argued Abbott and DeSantis would “never do this to white people” and compared Hispanics to “a garbage barrage” (click “expand”):

HASAN: Elie, how much of this is about race? If these were white families, white babies being treated this way, if this were, I don’t know, the Polish right-wing government sending babies without warning on buses to London or Paris to make a political point? How much outcry would there be in comparison?

MYSTAL: They’d never do this to white people. We all know it. The fact that these people are non-white is baked into the system, it’s baked into how they are allowed — how they think they can get away with treating people this despicably, by treating human beings as if they are — as if they are a garbage barrage that could be sent around the country, right? Like, that — the fact that — I want to pick up on what Kurt just said because the fact that Republicans think and might not be wrong that treating non-white people in this way is a winner for them kind of tells you all they need to know about the stated model of the Republican Party.

MYSTAL: This is a specific kind of twisted, bigoted evil that people like DeSantis are willing to truck in and that it works for them tells you all you need to know —

MYSTAL: — about the monsters that support people like Ron DeSantis.

Because NewsBusters recorded this episode ad-free on demand from Peacock, there were no advertisements available to include for this post.

To see the relevant MSNBC transcript from September 18, click here.