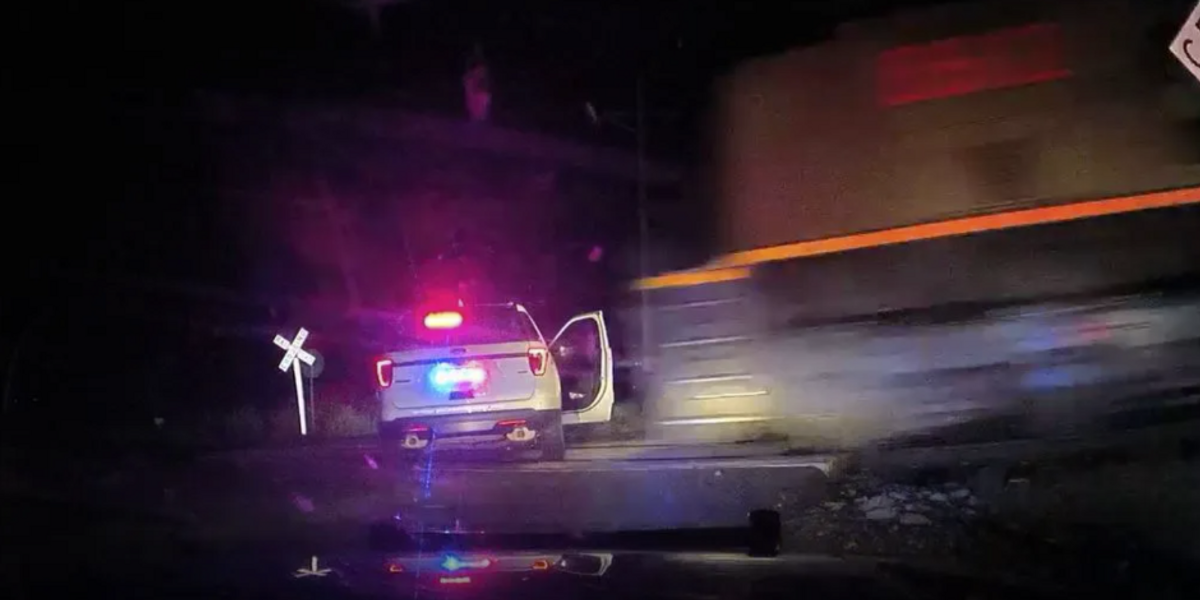 Police bodycam video shows the moment that a freight train slammed into a police cruiser in Colorado. At the time of impact, a woman in handcuffs was inside the cop car that was obliterated.

Around 7:30 p.m. on Sept. 16, Platteville Police Department officers pulled over 20-year-old Yareni Rios-Gonzalez. Police were responding to an earlier report of a road rage incident involving a gun in the neighboring town of Fort Lupton.

Police bodycam footage shows officers with guns drawn as they approach the pickup truck in Platteville – about 40 miles north of Denver. The officers order the woman to exit the vehicle with her hands raised. The suspect is handcuffed and escorted to the back seat of a patrol car.

While Rios-Gonzalez is detained in the back of the police SUV, officers inspect her pickup truck for weapons.

Suddenly, a train horn can be heard blasting in the background – growing louder and louder.

Police bodycam video shows the bright lights of the train quickly approaching the police cruiser sitting on the train tracks.

An officer is seen on video approaching the police cruiser before taking cover behind a police car.

The freight train violently plows into the police SUV at full speed with the woman handcuffed inside of the vehicle.

Police officers rush to the SUV that was fiercely mangled by the speeding train.

“Get us medical emergent. The suspect was in the vehicle that was hit by the train,” a cop frantically exclaimed into her radio.

The front passenger door was nearly torn off and the windshield was shattered. The airbags had deployed after the forceful impact.

u201cTRAIN HITS OCCUPIED POLICE CARnnVIDEO: With a suspect detained in the back seat, a police car is crushed by a fast-moving train in Weld CountynnSuspect was handcuffed in the back seat as the train blared a horn leading up to the crash. I will have more on @CBSNewsColoradou00a0 4/5/6pu201d

She suffered multiple serious injuries and was hospitalized. The woman is expected to survive the train crash, according to the Colorado Bureau of Investigation (CBI). There were no other injuries from the accident.

“Officers cleared the suspect vehicle to determine if anyone else was in the vehicle,” the Fort Lupton Police Department said in a statement. “Within a matter of seconds, the Platteville’s police vehicle, which contained the female detainee, was struck by a northbound train. Fort Lupton Officers immediately summoned medical assistance and began life-sustaining measures.”

The Platteville Police Department placed one of the officers involved in the near-deadly incident on paid administrative leave. The officer was not named.

You can watch the entire police bodycam video of the traffic stop, arrest, and subsequent train crash below.