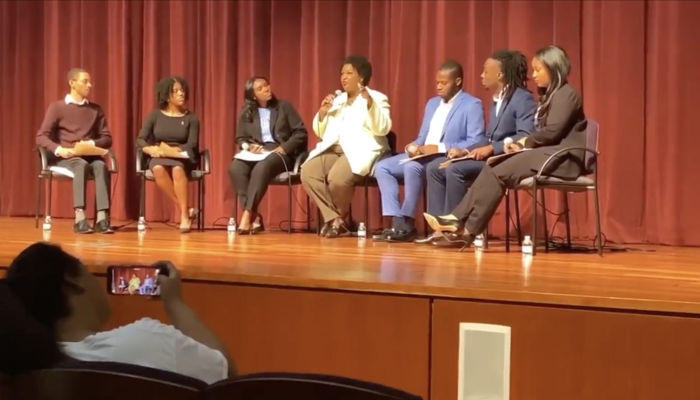 Numerous pro-abortion journalists have rushed to the defense of Georgia gubernatorial candidate Stacey Abrams, after she drew heavy criticism for claiming: “there is no such thing as a heartbeat at six weeks [of pregnancy].”

Abrams further pontificated: “[The heartbeat] is a manufactured sound designed to convince people that men have the right to take control of a woman’s body.” One can’t be certain, but Abrams seems to have gotten her talking point from Dr. Nisha Verma, an abortionist from Georgia who has become something of a go-to source for establishment journalists looking to “debunk” the idea of a fetal heartbeat.

For many people, Abrams’s fumble was likely the first time they’d even heard this argument. But as National Review contributor Alexandra DeSanctis pointed out on Thursday, “abortion supporters have made claims such as these for years, even before heartbeat bills were common.” She continued:

The pieces come in several flavors. Some are billed as reporting articles on heartbeat laws, wielding abusrd phrases such as “fetal cardiac activity,” “the pulsing of what becomes the fetus’s heart,” and “embryonic pulsing.”

We decided to investigate just how widespread this pseudoscientific pro-abortion narrative was throughout the establishment media, so here’s a hopefully close-to-exhaustive list of which leftwing print outlets have abandoned seriousness in service of the abortion cause.

But first, let us consider this quote from radiologist Pradheep J. Shanker on why the “electrical pulses” argument is nonsensical:

Ultrasound only detects density and motion. It cannot detect any electrical activity at all. This is a scientific fact… It is true that the valves in the heart develop later. However, the cardiac muscles that are located in the embryological heart are contracting. They are in fact moving inward and outward. That is how you define a beat.

Keep Shanker’s words in mind as you peruse the following quotes from purportedly serious publications:

The Atlantic: How Ultrasound Became Political (2017)
Previously titled, “How the Ultrasound Pushed the Idea That a Fetus Is a Person,” this piece has undergone heavy revisions since it was initially published in 2017. For example, it no longer includes the unfounded assertion that babies in utero have “no heart to speak of” six weeks into a pregnancy.

Business Insider: The ‘fetal heartbeat’ that defines Texas’ new abortion laws doesn’t exist, say doctors (2021)
This piece opens with a bulleted list of key points. One item reads: “A six-week-old fetus doesn’t have a cardiovascular system, the sound of the thumping is from the machine.”

Jezebel: Stacey Abrams Corrected Abortion Misinformation and Republicans Lost Their Minds (2022)
This article is very similar to the one from the Huffington Post, but written with a less family-friendly lexicon. Actually that’s a pretty decent description of Jezebel in general.

Live Science: Is a ‘fetal heartbeat’ really a heartbeat at 6 weeks? (2021)
This piece quotes a doctor who refers to a “fetal heartbeat” as “a little flutter in the area that will become the future heart of the baby.” Sounds sciencey!

The New York Times: Louisiana Moves To Ban Abortion After a Heartbeat Is Detected (2019)
Paradoxically, given the title of the article, author Alan Blinder referred to an unborn baby’s heartbeat as “the pulsing of what becomes the fetus’s heart.”

New York Magazine’s The Cut: Embryos Don’t Have Hearts (2019)
Katie Heaney writes: “To wit, though pulsing cells can be detected in embryos as early asa six weeks, this rhythm — detected by a doctor, via ultrasound — cannot be called a “heartbeat,” because embryos don’t have hearts.” As with most of the pro-abortion pieces in this vein, the fact pattern presented in the article is a clear product of expert-shopping.

NPR: The Texas Abortion Ban Hinges On ‘Fetal Heartbeat.’ Doctors Call That Misleading (2022)
Republished shortly after the draft Dobbs opinion was leaked in May, this article is the source of Dr. Verma’s misleading quote about heartbeats being “manufactured” by ultrasound machines.

Texas Tribune: For Texans who want a child but have difficult pregnancies, the new abortion law just made that journey even harder (2021)
This article is yet another case of ideologically convenient expert-shopping: “Medical and legal experts say it is misleading to use ‘heartbeat’ to refer to the cardiac activity of embryos at a developmental stage when they don’t possess a heart.”

The Washington Post: Conservatives’ junk science is having real consequences (2019)
This piece is exactly what one would expect from opinion writer Dana Milbank. The surprising bit was seeing the Post’s Glenn Kessler defending Abrams this past week in a tweet which read:

FWIW, “fetal heartbeat” is a misnomer. The ultrasound picks up electrical activity generated by an embryo. The so-called “heartbeat” sound you hear is created by the ultrasound. Not until 10 weeks can the opening and closing of cardiac valves be detected by a Doppler machine.

Wired: ‘Heartbeat’ Bills Get the Science of Fetal Heartbeats All Wrong (2019)
Before deploying the same goofy argument as all of the above articles, author Adam Rogers takes a moment to complain about the phrase “unborn human individual,” presumably on the grounds that it’s too humanizing.

Did we miss any? If you find another major print outlet that’s sacrificed its credibility on the altar of abortion, contact @banned_bill on Twitter and we’ll add it to the list.