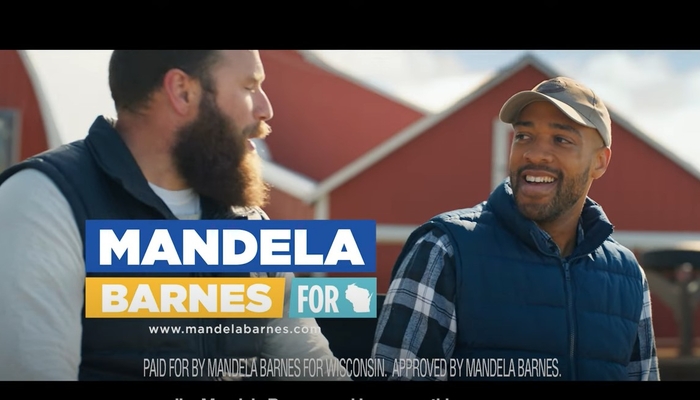 Beware the liberal media trying to warn you of how Republicans are in trouble, and the Democrats are gaining momentum. On Monday, Associated Press ran a story from Wisconsin headlined “GOP’s election-year standing with independents at risk.”

Reporter Tom Beaumont began with one voter: “Sarah Motiff has voted for Sen. Ron Johnson every time his name appeared on the ballot, starting in 2010 when the Wisconsin Republican was first elected as part of the tea party wave.” That would be….twice.

But now, AP proclaims, after Johnson downplayed January 6 probe and the Supreme Court issued a ruling “invalidating a woman’s constitutional right to an abortion, Motiff is opposing Johnson and supports his Democratic challenger, Lt. Gov. Mandela Barnes, in one of the most fiercely-contested Senate races this year.”

It’s actually Jesse Mandela Barnes, but he dumped the Jesse.

Beaumont summarized: “Now, a midterm campaign that the GOP hoped would be a referendum on President Joe Biden and the economy is at risk of becoming a comparison of the two parties, putting Republicans in an unexpectedly defensive position.” With the liberal media, Republicans always expect to be placed in a defensive position.

Then Beaumont lined up:

— “Steve Gray, a self-described Republican-leaning independent,” who says the Dobbs decision was “a partisan hand grenade Trump threw into this election.”

. Then Beaumont added a push to the narrative: “Independent voters who lean neither Democrat nor Republican nationally preferred Biden over Trump, 52% to 37% in 2020, and preferred Democrats over Republicans in U.S. House races by a similar margin in the 2018 midterms, according to AP VoteCast.”

AP did not report that Johnson was two points ahead of Barnes among independents in the Marquette University Law School poll, 48 to 46 percent. That’s quite a shift from August, when independents split for Barnes 55 to 40 percent.

Then check out the poll that came out after AP’s story: Johnson was ahead 52 to 39 percent among independents.

While AP suggested Johnson was in trouble on abortion, he failed to note Barnes takes the extreme position of favoring abortion at any time in pregnancy with no restrictions.

Rep. Cori Bush claims the Democratic Party is ‘pro-human rights’ as she promotes the ‘Roe The Vote: Reproductive Freedom Tour’
Doocy EXPLODES After KJP Ducks His Abortion Question: ‘You Did NOT Answer My Question!’
‘COPS’ Returning to Television After Being Cancelled During Black Lives Matter Riots Over George Floyd
DeSantis releases evidence undercutting federal lawsuit regarding migrant flight​ to Martha’s Vineyard
Blackrock CEO says the crisis in the price of energy is accelerating investment in green energy