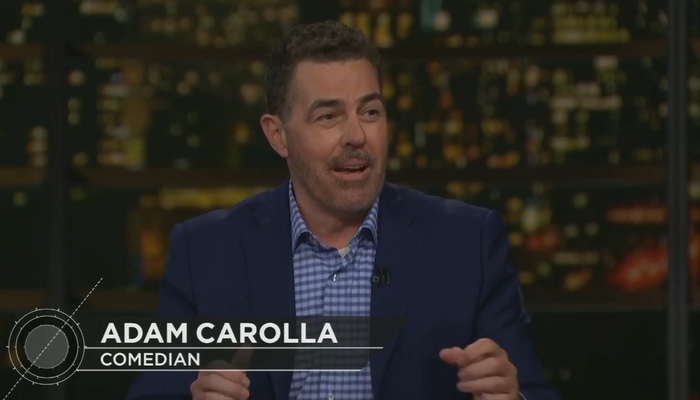 Performers censor themselves — fearing they might offend. Those who offend Hollywood lose work. Some lose friends.

Adam Carolla doesn’t care. That’s why he’s the subject of my video this week.

Carolla is one the most successful performers in America.

His books are bestsellers. His comedy shows sell out. He hosts one of America’s most-listened-to-podcasts.

Recently, Carolla dismissed Rep. Alexandria Ocasio-Cortez’s intellect, cracking that “If AOC was fat and in her 60s, would anyone listen to another thing she ever said?”

But what Carolla said is simply true. Nobody pays much attention to House freshmen. Ocasio-Cortez is a political celebrity simply because she’s pretty, and also, she speaks without constantly saying “uh.”

“If she was in her 60s and husky,” adds Carolla, “nobody would listen to a word she ever said!”

He won’t apologize for saying that. Or anything else.

“No Apologies” is on the cover of his new book, “Everything Reminds Me of Something.”

“They want you to apologize because they want dominion over you. And once you apologize, they just keep coming back.”

I get upset when people criticize me. Carolla says, “I just happen to be wired not to care, as long as I’m right.”

He says he was right for criticizing the government’s COVID pronouncements. “They didn’t give the ages of the people who died at the very beginning,” Carolla tells me. “I immediately got suspicious because it was a bunch of 90-year-olds.”

For saying that, Carolla was mocked and condemned by his celebrity friends.

Carolla laughs at those attacks.

He’s unusual in Hollywood because he’s still friends with leftists who disagree with him.

He does stand-up comedy with Sarah Silverman. He joins Bill Maher’s podcast. Such political mixing is rare today. Usually, the left and right just don’t talk to each other.

Carolla says that’s not surprising. “If you’re a Steelers fan in a bar, you want to sit next to a guy who’s a Steelers fan.” But “occasionally … you have to invite somebody over from the Patriots bar and have a robust debate.”

All my career, I had robust debates. I learned from those arguments. Today Stossel TV still hosts debates, but that’s rare in today’s political media. Most just mock the other side or spend all their time with people who agree with their own positions.

On college campuses, it’s worse. The left simply silences the other side.

I first encountered it years ago, covering a rape accusation at Brown University for “20/20.” A student had sex with a woman who was drunk; weeks later, she accused him of rape. The school newspaper put the boy’s photo on its front page but kept his accuser anonymous. University officials suspended the boy.

I asked Brown students holding up signs that said “Break the silence, stop sexual assault” to explain Brown’s new definition of rape. The group screamed at me, chanting “Rape is not TV hype!” so loudly that I couldn’t interview anyone else.

They don’t want the other side to be heard.

“They would let the other side speak if they thought they could beat them in a debate,” says Carolla. “They don’t.”

Carolla is eager to debate, partly because he’s confident about his ideas. “I think if you’re intellectually honest or I gave you two beers, you would agree with me.”

If his ideas are bad, they’ll go away. But it’s important that people be free to speak.

“I don’t really have a choice as to what I say,” says Carolla. “It has to be the truth all the time. I’m a comedian. It’s a sacred oath I took.”

Nets Skip Report Biden’s Afghan Withdrawal Was ‘Propaganda Boon’ for China
Democrats ‘Terminate’ the Constitution to Impose Their Agenda All the Time
One dead, others injured after ‘rogue wave’ strikes Viking Polaris ship
NewsBusters Podcast: The US Hostage In Iran Rooted for Iran to Beat US?
Drop the covid “vaccine” mandate or no more defense funding, say GOP members of Congress to military