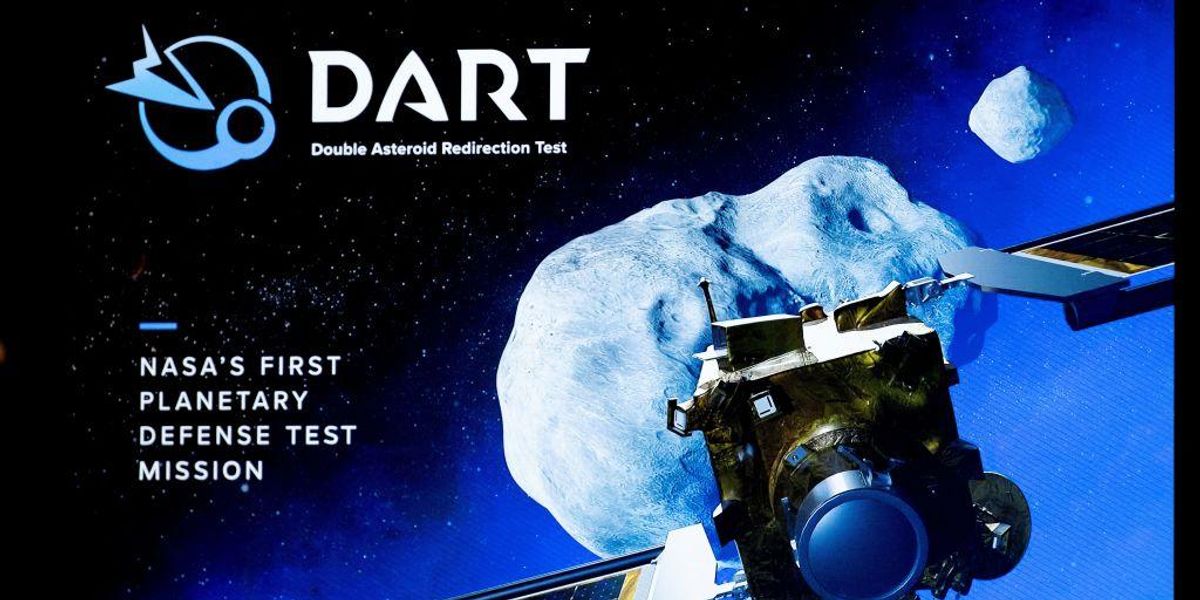 On Monday, NASA’s Double Asteroid Redirection Test (DART) spacecraft is set to collide with Dimorphos, a small asteroid, in an attempt to alter the object’s path.

The New York Times explains that in 2005, Congress set a mandate for NASA to find 90 percent of near-Earth asteroids that are big enough to destroy a city — those that are 460 feet or wider in diameter. As NASA searches for deadly asteroids, it also is developing methods for responding to a potential threat.

With DART, NASA is making humanity’s first-ever (real-life) attempt at redirecting an asteroid. NASA’s goal is to see if DART can speed up Dimorphos’ orbit around a larger asteroid, Didymos. The mission is a proof-of-concept demonstration that hitting an oncoming asteroid with a projectile can nudge the asteroid into a different orbit, the New York Times explains. Such a nudge could mean the difference between as asteroid hitting Earth or safely passing us by.

Dimorphos was chosen for its proximity to Earth — it’s about 6.8 million miles away — but NASA says it poses no threat to our planet. The rock is about 525 feet in diameter.

“We describe it as running a golf cart into the Great Pyramid,” said Nancy Chabot, a planetary scientist at the Johns Hopkins University Applied Physics Laboratory in Laurel, Maryland.

Once DART approaches the asteroid, the spacecraft will be largely self-guided until it makes its crash landing. “You’re moving extremely fast,” said Elena Adams, the DART mission systems engineer. “And at that point, you cannot really send any commands. And so your system has to be very, very precise in how it’s controlling the spacecraft.”

It will take days to weeks before scientists can confirm whether the test worked, according to Nature.

DART is scheduled to crash into Dimorphos at 14,000 miles per hour at 7:14 p.m. Eastern time on Monday. NASA Television will broadcast coverage of the end of this mission beginning at 6 p.m Eastern time. NASA will also begin broadcasting a stream of photos from DART as it closes in on the asteroid at 5:30 p.m. Eastern.

“We are super excited to see what it’s going to look like,” said Michelle Chen, a software engineer at the Johns Hopkins lab.

NASA has not indicated whether it will undertake future tests if the DART mission fails, but rumors are circulating that Bruce Willis remains on standby.