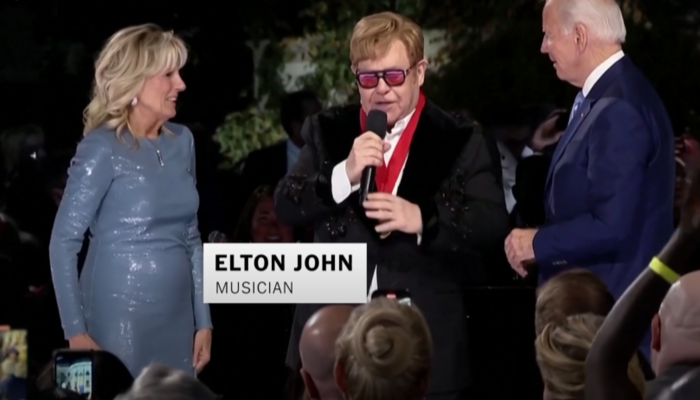 Most of the article was a look at former President Trump unsuccessfully working to get John, one of his favorite entertainers, to the White House. John, a reliable liberal entertainer, rebuffed him.

For anyone who was listening, Elton John’s music was the unofficial soundtrack to Donald J. Trump’s presidency. The songs “Tiny Dancer” and “Rocket Man” were pumped into the background of his political rallies at earsplitting decibels. A copy of Mr. John’s 1972 album, “Honky Château,” became a diplomatic gift for North Korea’s dictator. The singer’s crowd sizes were both a presidential fixation and an aspiration.

Which is why it was so interesting that Mr. John, a superstar and longtime activist, played at the White House on Friday as a guest of President Biden and Jill Biden, the first lady, years after sidestepping Mr. Trump’s overtures.

“Interesting” to Rogers anyway, who got 1,400 words out of it for Saturday’s print edition and some righteous but unfounded political digs against Trump.

….as Mr. Trump grew more involved in politics, the singer he was so personally fond of began to publicly declare his support for Democrats. Mr. John, who played at a fund-raiser for Hillary Clinton, Mr. Trump’s Democratic rival for the presidency, said that he had “fear for the world” if Mr. Trump were to win.

“He’ll marginalize people,” Mr. John told the news site Mic in the summer of 2016. “He’s already doing it.” The warning was prescient: After Mr. Trump’s election victory, his administration aggressively moved to strip away the rights of people in the gay, lesbian, bisexual and transgender community.

Rogers didn’t deign to provide links or examples of the “rights” Trump had “strip[ped] away.” In fact, Trump came into office as a supporter of gay marriage, which is more than could be said for Barack Obama.

After spending several years with his music piped into Mr. Trump’s political wind turbine, Mr. John, who is 75, seems intent on reclaiming his music and reaffirming his support of communities that Mr. Trump and his supporters have maligned.

Again, no examples of such “malign” intent, just one last ridiculous shot at Trump while promoting a silly victory lap for Biden.

Rogers can be relied upon to find awful things in everything Trump said or did, no matter how correct, as when he called COVID, which originated in China, the “Chinese Virus.”