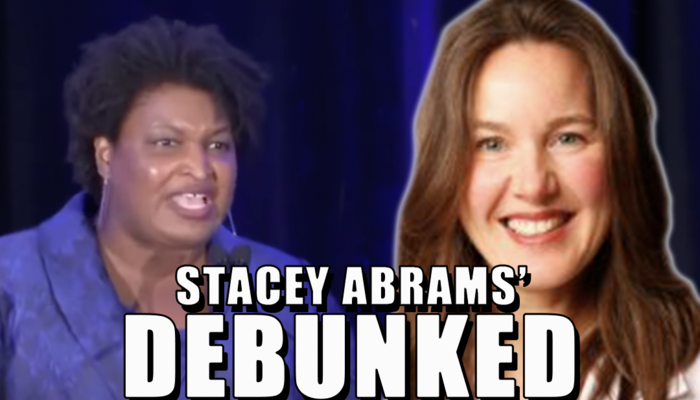 On September 22, a video of far-left Georgia gubernatorial candidate Stacey Abrams spread across the internet, in which she claimed that six-week-old fetal heartbeats are “manufactured” sound.

I sat down with a medical expert to hear the scientific debunking of Abrams’ claims.

Dr. Tara Sanders Lee, who studied heart development at Harvard Medical School and currently serves as the Director of Life Sciences at the Charlotte Lozier Institute, was astonished by Abrams’ anti-science claims.

Lee then provided legitimate scientific findings that squashed Abrams’ lies, first explaining that “the heart is the first functioning organ in a developing human being” and that it begins beating “just 22-days after fertilization.”

After destroying Abrams’ basic claim, Lee then commented on the motive behind the leftist media covering for Abrams, saying:

This is the playbook that they use. The media can perform these olympic level semantic gymnastics all they want but most Americans instinctively understand that a developing human organ which beats rhythmically and pumps blood through the body is in fact a heart. And I think they do this because if they can convince themselves and others that there’s actually not a living human being with a beating heart, its the only way that they can justify their support for advocating for the right to kill a baby.

Lee was spot-on with her remarks. We’ve seen time and time again how pro-abort position of the leftist media – whether it’s in the glamorization of abortion, the erasing of content that doesn’t push the pro-“choice” narrative, or the promotion of blatant scientific lies, the media’s stance is clear.

Take the Planned Parenthood website, for example, which scrubbed its site regarding a 5-6-week old developing heart in utero shortly after Abrams’ video spread on Twitter. Dr. Lee was not surprised at the move, and mentioned how Planned Parenthood acted similarly when there was debate over whether or not the treatment for ectopic pregnancies counted as abortions (fyi: they don’t).

Lee added that that same media is painting Senator Lindsey Graham’s 15-week abortion bill as “extreme,” despite the fact that “47 out of 50 European nations limit elective abortion after 15-weeks,” making Graham’s bill far from “extreme.”

Lee does exceptional work fighting for the unborn over at CLI, and suggested viewers visit a partner site, Voyage of Life, to learn more about the truth of abortion and avoid falling into the bandwagon of leftist, pro-abortion fallacies.