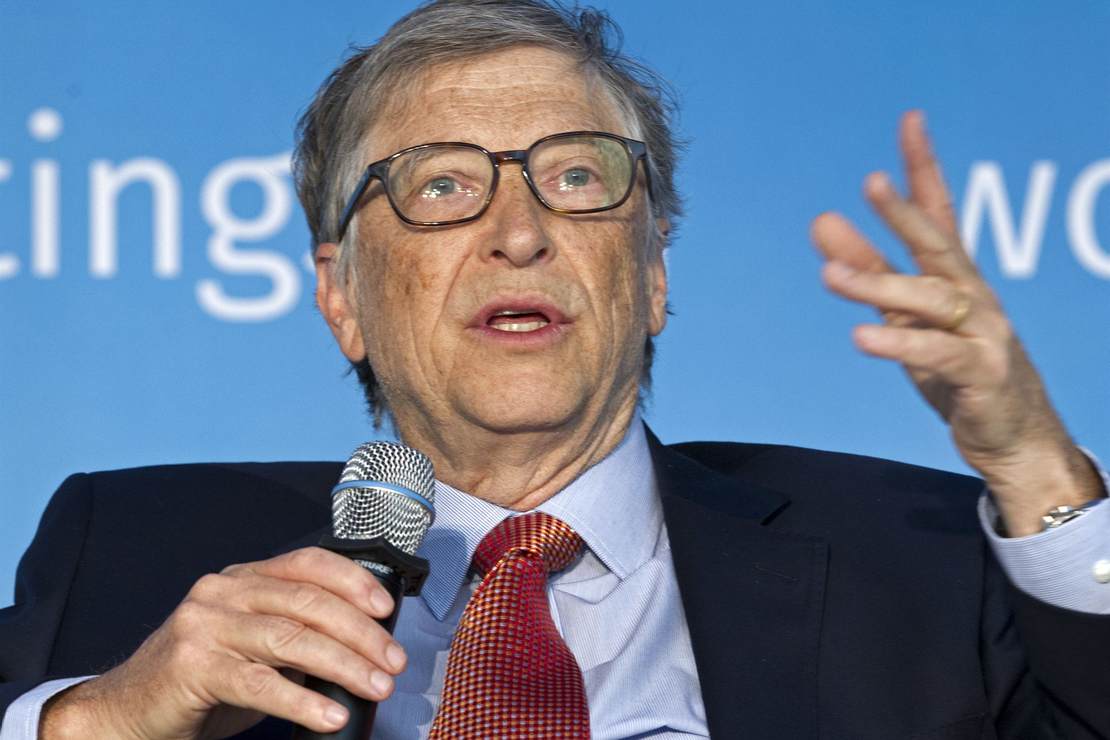 Irony 101: Bill Gates, #1 cheerleader for Respecting the Science©, admitted in public to pressuring Trump to put the kibosh on scientific research.

Back while he was running for office in 2015-16 and then again once he had assumed office in 2017, Trump reportedly expressed interest in forming a commission to investigate the potential negative side effects of vaccines.

Self-appointed, unelected Science© overlord Bill Gates—who, conveniently, heavily invests in Moderna via his “nonprofit” Bill & Melinda Gates Foundation—explains his reaction to his interests being threatened in such a manner, using his trademark effeminate, non-threatening floppy arms to illustrate nonverbally:

“In both of those two meetings, [Trump] asked me if vaccines weren’t a bad thing, because he was considering a commission to look into ill effects of vaccines,” Gates confessed. “And I said, ‘No, that’s a dead end. That would be a bad thing, don’t do that.’”

Gates goes on to lament Trump allegedly acting pervy vis-a-vis his daughter, Jennifer—as if he actually has some sincere moral aversion to pedophilia, as if his wife didn’t divorce him for flying on prolific pedophile Jeffrey Epstein’s Lolita Express and visiting him at his kiddie-diddling palace multiple times late into the night.

At the time Gates made the remarks in 2018, the Public Health© stakes were much lower, and there was significantly less pressure bubbling up from within the medical community rank-and-file to investigate vaccines.

At the time, the Science© (assisted by propaganda disseminated in the Gates-funded corporate media) enjoyed a firm grip on the American public psyche. Big Pharma’s vaccines were sent by God. Only the most outlandish conspiracy theorists like Robert Kennedy Jr.—who, incidentally, was a celebrated figure in liberal circles until he committed this blasphemy and was excommunicated—challenged the unquestionable dogma of vaccine safety.

Gates’ lobbying efforts very possibly persuaded Trump not to go ahead with his investigation, which plausibly could have affected the president’s later decision to authorize Operation Warp Speed in 2020.

It’s not a stretch, then, to suppose that Gates successfully leveraged his pop-culture celebrity to change the course of medical history—leading to untold suffering from the COVID-19 vaxxes’ ill side effects he deterred Trump from investigating.

The most pressing questions that emerge are:

In a 2010 Ted Talk ominously titled “Innovating to Zero!” that I previously reported on, Gates gave his true agenda away—which has nothing to do with altruism and everything to do with his pet project of stealth depopulation:

The world today has 6.8 billion people. That’s headed up to about nine billion. Now, if we do a really great job on new vaccines, health care, reproductive health services, we could lower that by, perhaps, 10 or 15 percent. But there, we see an increase of about 1.3. [Emphasis added]

You might be forgiven for wondering: “But isn’t the purpose of vaccines to instigate an immune response to a pathogen to prevent infection? What on Earth does vaccination have to do with population control?”

Bless your naïve heart. Of course, immunity to disease is what vaccines used to be intended to accomplish—before Bill Gates, whose father served on the board of eugenicist Planned Parenthood’s board of directors, turned vaccines into bioweapons for population control.

The corporate media frequently derides “anti-fertility” vaccines as “conspiracy theories.” Unfortunately for them, the medical literature is widely available on the web—at least for now—even if you can’t share it on social media.

In 1993, WHO [World Health Organization] announced a “birth-control vaccine” for “family planning.” Published research shows that by 1976 WHO researchers had conjugated tetanus toxoid (TT) with human chorionic gonadotropin (hCG) producing a ‘birth-control’ vaccine. Conjugating TT with hCG causes pregnancy hormones to be attacked by the immune system. Expected results are abortions in females already pregnant and/or infertility in recipients not yet impregnated. Repeated inoculations prolong infertility. [Emphasis added]

The Bill and Melinda Gates Foundation is now the second-largest contributor to the WHO and the largest private donor. It’s also heavily involved in on-the-ground vaccine research in Africa and South Asia, including directly financing tetanus vaccines in those regions. The Foundation also invests in outright depopulation initiatives like the Population Resource Center.

Three independent Nairobi accredited biochemistry laboratories tested samples from vials of the WHO tetanus vaccine being used in March 2014 and found hCG where none should be present. In October 2014, 6 additional vials were obtained by Catholic doctors and were tested in 6 accredited laboratories…Given that hCG was found in at least half the WHO vaccine samples known by the doctors involved in administering the vaccines to have been used in Kenya, our opinion is that the Kenya ‘anti-tetanus’ campaign was reasonably called into question by the Kenya Catholic Doctors Association as a front for population growth reduction. [Emphasis added]

Despite the Gates’ substantial efforts to kill the story, these claims are well-documented and supported by reams of clinical data.

If it weren’t for the dogged efforts of the Kenya Catholic Doctors Association, we never would have uncovered the surreptitious insertion of anti-fertility compounds into the vaxxes. Otherwise, the Gates Foundation enjoys near-zero oversight when it administers its pharmaceutical cocktails in these regions—one of the reasons he selects them as testing grounds.

The truth is slowly winning out in the information war.

After years of corporate pro-vaxx propaganda dismissing concerns over the Gates-funded COVID-19 shots’ effects on fertility as “conspiracy theory”—despite thousands of reports from women begging for an honest scientist somewhere to look into it—the corporate press has repositioned its stance to acknowledge that “the fertility effects of COVID-19 vaccines are unknown.”

Nonetheless, the Science© priests at CDC persist in recommending the shot for pregnant women because they are impervious to actual scientific evidence. We need a political revolution to smoke the eugenicist bureaucrats who hide behind Public Health© out of their Deep State hole.