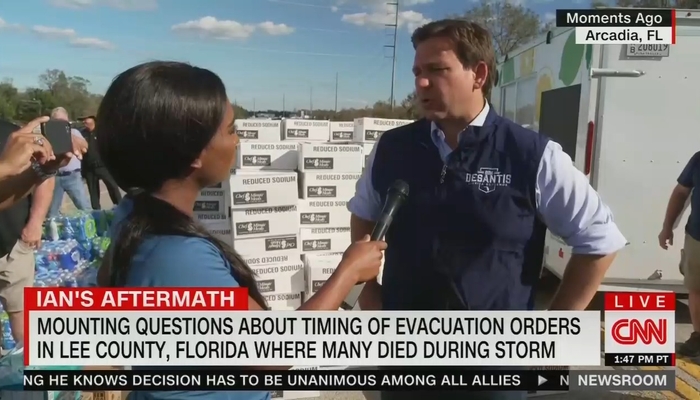 Over the weekend, the liberal media made the pivot to pin blame for Hurricane Ian’s catastrophic destruction and loss of life in Florida n Governor Ron DeSantis (R) and Lee County officials. CNN was naturally part of this campaign Sunday afternoon as they sent correspondent Nadia Romero to confront DeSantis. Spoiler alert: It didn’t go well for them as DeSantis wiped the floor with the assembled journalists.

CNN chief carnival barker Jim Acosta tossed to Romero in the 4:00 p.m. Eastern hour after he led off his newscast by insisting Florida officials “are facing mounting questions about the timing of their mandatory evacuation orders” in Lee County.

Romero began with snark: “Why do you stand behind Lee County’s decision to not have that mandatory evacuation until the day before the storm?”

Showing why he’s more polished than anyone in politics and seen by many conservatives as their top 2024 pick, DeSantis promptly wiped the floor: “[W]here was your industry station when the storm hit? Were you guys in Lee County? No, you were in Tampa. So, that’s — yeah, they were following the weather track and they had to make decisions based on that.”

DeSantis added that, 72 hours from landfall, the area wasn’t “even in the cone” and “the periphery” at 48 hours, “[s]o, you’ve got to make the decisions the best you can.”

Despite that varying track, “the message” was still “delivered…to people” so they “had adequate opportunity to at least get to a shelter within the county, but, you know, a lot of the residents did not — did not want to do that.”

“[I]t’s easy to second-guess them. But they were ready for the whole time and made that call when there was justifiable to do so,” he stated.

Romero continued to push back with the same talking points that would lead to the conclusion that DeSantis and Lee County failed to keep their citizens safe, but DeSantis stood his ground (click “expand”):

ROMERO: Some of their neighboring counties did have mandatory evacuations before Tuesday.

DESANTIS: Well, right, but our neighboring — I mean, if you look at, like, Tuesday morning. They had moved the track down. Models started showing it going to, like, Sarasota. You know, so that’s — so they did that. I was in Sarasota that day with them, when they were expanding some of their evacuations. You know, Charlotte, I think did the same thing, either Monday night or Tuesday morning. So, you know, but don’t forget. Sunday, 11:00 a.m. advisory. It was going to go to Taylor County in North Florida. And so, you know, that — at some point, you’ve got to look to see, kind of, where this thing is going. So, yes, no, I mean, I think it — I think that it’s easy to say, in hindsight. You know, we had most of our supplies stationed in the Tampa Bay area. As that track moved, we shifted our response further south as well. Now, we said there would be impacts for sure. And even when it was going to hit North Florida, it’s such a big storm. There was going to be impacts in Southwest Florida as well. But the difference between impacts and having the eye go there is much different. And, for most of Sunday-Monday and even into Tuesday, it was 100-150 miles away from them.

ROMERO: Is that one of the things you’ll be reviewing, once we get out of the aftermath? People get their power back on, looking at those evacuation orders because even in Lee County, if they had followed their own evacuation orders from what we’ve reviewed, they should have had that mandatory evacuation order sooner.

DESANTIS: Well, but, you know, the issue though is also that there were a lot of — you know, they informed people and most people did not want to do it. I mean, that’s just — that just the reality, so, you know, you’re in a situation. Are you going to grab somebody out of their home that doesn’t want to? I don’t think that’s the appropriate use of government. I mean, I think that that takes it a little too far.

Romero pivoted to flood insurance and tried to trap him by wondering if those living near water should have flood insurance. DeSantis obviously agreed, but Romero tried to suggest otherwise because “[t]here has been some criticisms about those skyrocketing premiums during your term as governor.”

DeSantis schooled her again by citing the fact that “the flood insurance is a federal program” and is not a state issue and, beyond that, the National Flood Insurance Program “drove all the insurers out” in the last decade plus.

Before Romero ended with a line of questioning implying families having a lack of communication with loved ones was his fault, another reporter fell flat on his face with this drivel: “Governor, what is the talk at the state level of taking into account global warming climate change if we rebuild these areas that we see the sea level rise? Are we having those talks at this level right now?”

DeSantis promptly dismantled him: “I don’t know if you’re based in Florida. But, I mean, I created a program, called Resilient Florida, that we put a billion dollars into over the last two years. And local communities are able to get money…to be able to make improvements and harden some of their infrastructure”

Afterward, Acosta griped that DeSantis “sound[ed] like he’s very supportive of the decisions that were made” even though “residents are, frankly, asking a lot of questions”.

Romero later closed by claiming DeSantis and local officials caused “a lot of confusion and a lot of disorganization.” Naturally, Acosta congratulated her, saying she was doing “terrific work.”

SANCHEZ: There are indications that Lee County’s comprehensive emergency management plan was ignored. Lee County did not issue evacuation orders until Tuesday morning.

MARCENO: So let’s talk about that, sir. I’m going to cut you off before you go any further. I don’t know who you are, I don’t know where you come from. Everyone wants to focus on a plan that might have been done differently. I’m going to tell you I stand 100 percent with my county commissioners, my county manager. We did what we had to do at the exact same time. I wouldn’t have changed anything, and I know being in those meetings from the very minute, this storm was very unpredictable. And I stand right here. My fellow brother Chad Chronister was here from Hillsborough. I called him five hours when he got word that the storm was going to hit Tampa. And I said, sheriff, I’m sorry. I see the projected path. I’m going to send you everything that we have to help you. Well, that unpredictability, he called me back and said, Sheriff, look what we’re talking about. That storm is now coming your way. We weren’t even in the projected path or cone, ok. So I’m confident that we gave everything to this storm we should have at the right time and I think more so the governor had it right. He said after the cameras are here and they’re long gone, you know, there’s a thirst to be first, right. Everybody wants that information. For us it’s about a commitment. It’s not just the cameras. It’s about moving forward in a positive way. And now let’s focus on what’s the right thing to do and how we could help the people that are in need. Next question.

SANCHEZ: Respectfully, my name is Boris Sanchez. I’m with CNN. I’m purely presenting the questions that are being asked —

SANCHEZ:  by folks here on the ground who are reading these reports and reading this plan and wondering if something could have been done differently. We respect what you’re doing now. We appreciate it.

SANCHEZ: Again, respectfully, places like Hillsboro County, counties nearby Lee County evacuated, issued evacuation orders well before Tuesday morning when Lee County did. What do you say to residents who look at that and wonder why Lee County waited to do so?

MARCENO: And respectfully I say because of the projected path we were not even in the cone and the storm was slow moving about nine miles an hour, although it packed a horrific punch. The second that we could and should issue that order, I’m confident that we did. Again, we wouldn’t change anything. And also, I also understand that there are some people that don’t want to leave their homes. We cannot force them to leave their homes. That’s their homes. But we can do everything we can to educate them and make sure they’re aware of what’s coming their way or possibly because, again this was so unpredictable, so I do stand by the plan that was in place. And I know that we did everything possible, respectfully, for everybody here, and I know that.

The early evening saw more DeSantis bashing. Acosta insisted they weren’t looking for a fight and instead merely passing along concerns “anecdotally” “from residents here on the gulf coast of Florida.”

Romero fretted DeSantis “doubled down” on this farcical notion that Lee County residents were put in harm’s way and thrown for a curve.

[W]e heard what Governor DeSantis said but we should note that…residents there are questioning why they weren’t told to evacuate sooner. And you are the vehicle for their questions to the governor. Excellent reporting.

Sunday’s ghoulish attempt to tar and feather DeSantis was made possible thanks to the support of advertisers such as Carvana, Chase, and Safelite. Follow the links to see their contact information at the MRC’s Conservatives Fight Back page.

​Dwayne ‘the Rock’ Johnson admits he stole Snickers from 7-Eleven daily at age 14, says he went and bought all the Snickers ‘to right this wrong’
Musk: Brain implants ‘ready for humans’ — confident Neuralink could help the blind to see and the lame to walk
Robbery suspect won’t face murder charges in shooting of gas station clerk since suspect allegedly returned fire at clerk — which can be considered self-defense
House Dems Will Never Compromise, so They’re Calling on the GOP Majority To
‘Unwoke With Kevin and Kruiser #54: Disney’s Minor Woke-ectomy and Superheroes of Yore