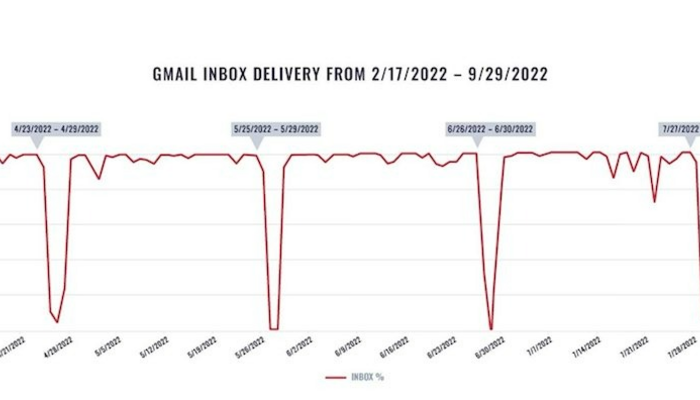 “We’re 40 days out from Election Day, we do not have any new transparency from Google,” the RNC wrote in an emailed statement. “We have raised this issue with Google for months with no resolution. On top of it all, our emails have been suppressed despite concrete changes that have improved overall performance.”

This comes more than a month after the FEC

The RNC in September updated its email marketing practices around factors including recentness of click, petition signature and donation.

Republican Party emails’ delivery rates plummeted from a regular delivery rate of 90- to 100-percent to zero percent at the end of the month, Fox News reported, citing data that RNC reportedly provided to the outlet.

The high email spamming rates have continued for the last 10 months, affecting fundraising and get-out-the-vote efforts, the RNC said. This indicates that Google has not taken definitive steps to limit the amount of GOP political emails hitting users’ spam folders, despite Google’s pledges to give political campaigns the option to have more of their emails sent to users’ inboxes.

The bills, which remain pending in committees, would require Gmail to release quarterly reports noting how many times the provider flagged respective GOP and Democratic Party campaign emails as spam.

It appears those politicians’ concerns were on the mark.

“Big Tech bias is undermining the democratic process and the RNC is exploring our legal options to put an end to this clear pattern of bias,” McDaniel said.

Google did not respond to an MRC Free Speech America request for comment.

Conservatives are under attack. Contact Google at 650-253-0000 and demand it mirror the First Amendment while providing transparency, clarity on hate speech and an equal footing for conservatives.