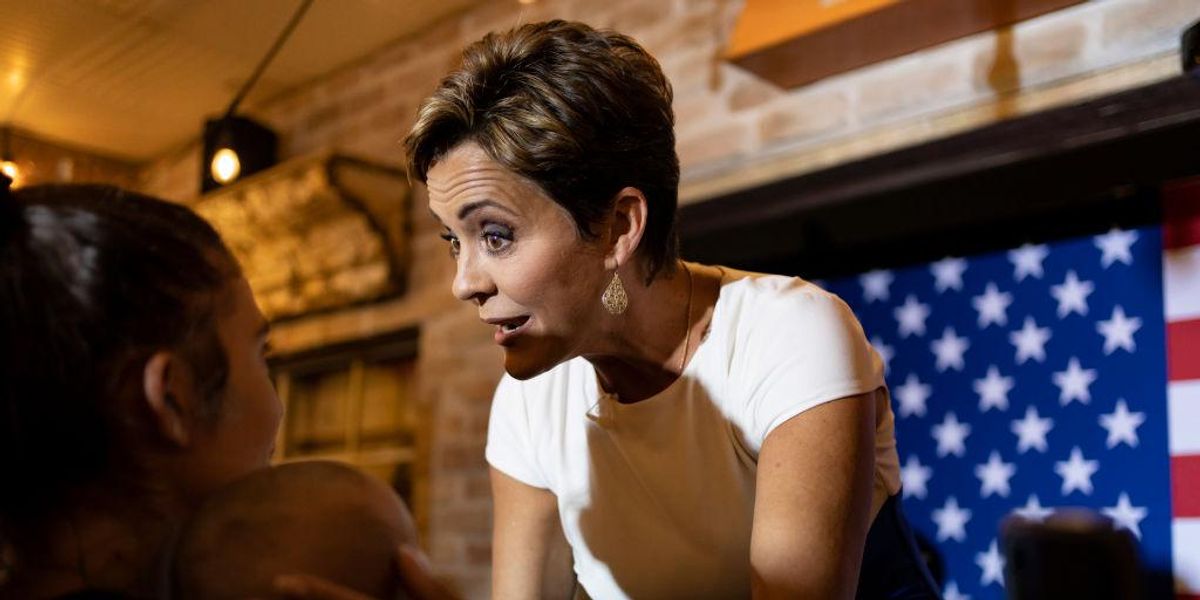 Arizona Republican gubernatorial candidate Kari Lake performed a rhetorical jiu jitsu flip of a reporter who tried to corner her on abortion at a speaking event.

“Tell me, if abortion is effectively banned in the state right now, tell me, is that something that you support?” a reporter asked Lake at the RNC Hispanic Community Center in South Phoenix last week. The Donald Trump-endorsed firebrand responded by turning the reporter’s question around to highlight her Democratic opponent’s abortion-rights extremism.

“I support saving as many lives as possible,” Lake answered. “And what I really want to know, and I’ve been waiting — I tune into you guys all the time — I want to know where Katie Hobbs stands. But I never hear you guys ask her that.”

“I’m pro-life,” she continued. “My plan would be that every woman who walks into an abortion clinic know that there are options out there, they don’t have to choose that. There’s families who would love to adopt a baby. And right now, the way it’s been going, they go in and they only have one option. Nobody tells them that there’s other options.”

Abortion has surged to the forefront of Arizona state politics after a judge ruled that the state’s 1864 law banning nearly all abortions should be enforced after the U.S. Supreme Court overturned Roe v. Wade. Katie Hobbs, the Democratic secretary of state for Arizona, seized on the issue and vowed to repeal the abortion ban if elected governor, calling out Republicans for remaining silent on the state’s abortion ban.

“Make no mistake: if elected governor, Lake will seek to further take away Arizonans’ reproductive freedoms and put millions of peoples’ lives on the line,” the Hobbs campaign said in a statement.

“Under this ban, it’s Arizona women and families who will suffer the most,” Hobbs said. “And as a mother, I’m furious that my 20-year-old daughter will have fewer rights than I did 50 years ago. The overwhelming majority of Arizonans support access to safe and legal abortion. This decision is a direct affront to what we the people, the voters, Arizonans, want.”

At a press conference Saturday, Hobbs added, “We deserve the health care that is our right, and access to safe, legal abortions, period.”

Lake sidestepped the reporter’s question on the Arizona law and demanded that journalists get more specifics from Hobbs on what limitations, if any, she supports for abortion.

“We want to help our women,” she said. “If they’re afraid we want to help them. We want to give women health care. And I want to help people. But I really challenge you, and I’m happy to get back to you on this when you find out where Katie Hobbs stands. Because let me tell you where she stands. She supports abortion right up until birth and after birth. She supports if a baby survives a botched abortion that that baby die on a cold metal tray. And none of you ever try to get her to try to talk about her stance. So get back to me after you do.”