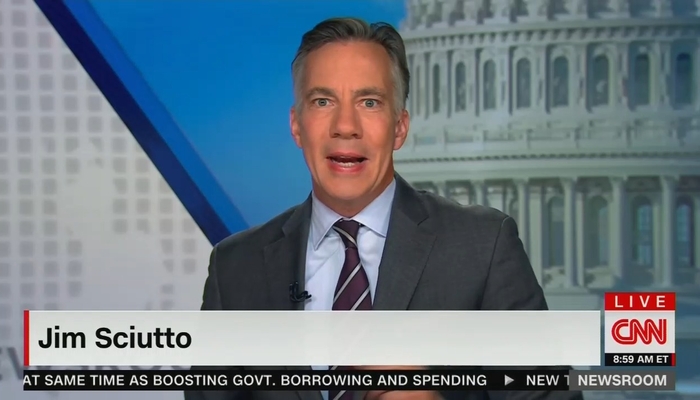 The Daily Mail reported in an exclusive late Wednesday that weekday morning CNN Newsroom co-host and former Obama official Jim Sciutto has been sent off on a leave of absence from the struggling network so he can “address personal issues” stemming from a mysterious trip to Amsterdam with a producer earlier this year after having been covered the war in Ukraine.

“CNN mainstay Jim Sciutto has been off air after network bosses ordered him to address a ‘personal situation’ stemming from a ‘serious fall’ he suffered while in Amsterdam earlier this year,” said Daily Mail reporter Paul Farrell. He explained that, after having co-hosted Monday morning’s CNN Newsroom with Poppy Harlow, he hasn’t been seen since.

Farrell added that “a media source has told” them Sciutto “is now on ‘personal leave’” and “CNN has not responded to requests for comment.”

Earlier this week, The Daily Beast’s Confider newsletter reported that Sciutto “was the subject of a CNN internal investigation earlier this year…after he had a serious fall in Amsterdam enroute home from a reporting trip to the Ukraine” with a unidentified producer even though CNN had their teams “taking direct flights home from Poland.”

The move marked the latest personnel turmoil for a liberal network still in a power struggle with new boss Chris Licht and parent company Discovery with many still behaving with virulent partisanship and snark that was encouraged by former boss and puppetmaster Jeff Zucker.

Along with Zucker’s ouster in February over what had been an open affair with fellow CNN executive Allison Gollust, CNN has seen the departure of Gollust, liberal hosts Chris Cuomo and Brian Stelter, far-left White House correspondent John Harwood, and fellow Resistance commentators such as Amanda Carpenter and Asha Rangappa.

Sciutto, who has been married to ABC correspondent Gloria Riviera (whom he was a colleague with at ABC in the 2000s), is also the father of two.

Creepy woman who shared pornographic images of teen during prison visit with sex offender pleads guilty
On Second Thought, Chris Licht Wants CNN To Stay Librul!
CNN Is Mute as Biden Still Doesn’t Understand Meaning of ‘Semi-Automatic Weapons’
“I Know Everything You’re Hearing Is Going to Be Dropped in Bin #3 – There Will Come a Day When You Sit Before a Higher Judge” – Maricopa County Election Worker Testifies Scanners were Not Working ALL DAY – Computers Went Down (VIDEO)
What Happened to Trump Only Surrounding Himself With ‘the Best People’?