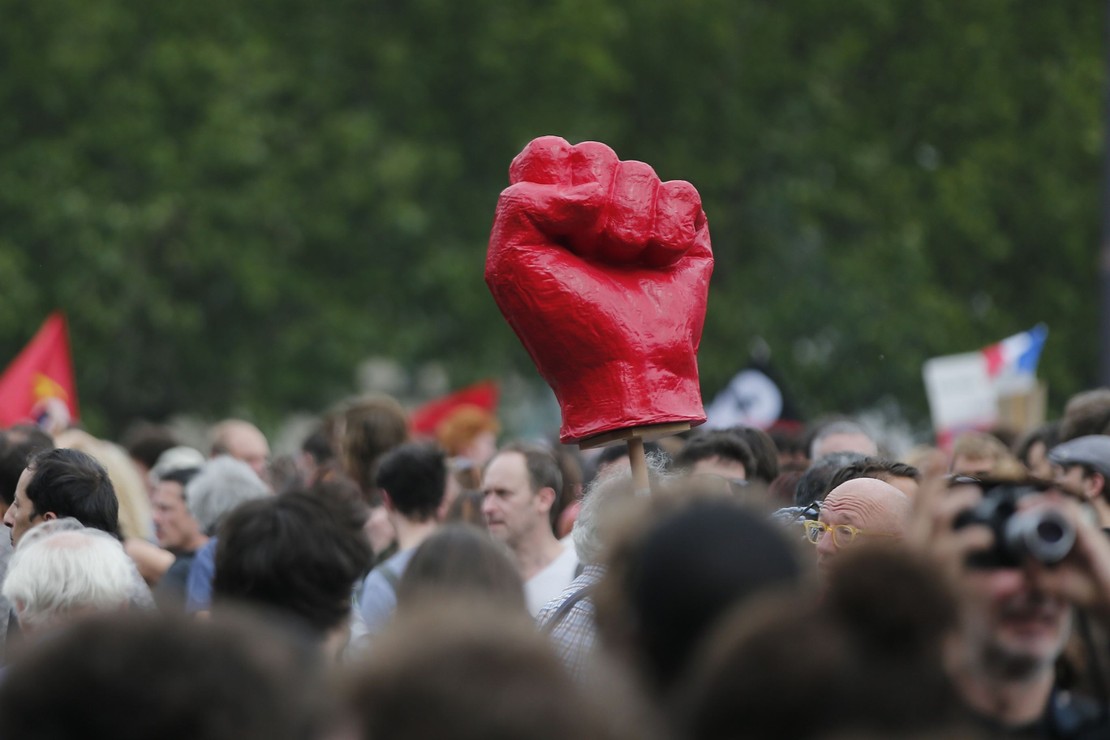 Because the modern left is full-on psychotically committed in the vein of Walter White at the height of his power, “nothing stops this train” is the prevailing ethos.

They’re in the empire (of filth) business.

The prevailing social incentive within the leftist ecosystem is for its members is to become increasingly more extreme and militant. Gays are out; common transgenders aren’t edgy anymore; pangender human-animal sexual hybrids are in.

It is only a matter of time before pangender human-animal sexual hybrids become another protected class, afforded complementary hate-crime legislation.

“Say no to anti-human-alpine-goat hate!” and “Fight the human-human supremacy!” will read the future Antifa signs.

The inertia-driven trajectory towards extremism is brewing an actual war. Leftist ideology and right-wing ideology are on entirely different and irreconcilable trajectories — and the further each digs into the trenches, the more it radicalizes the intensification of posturing on the other side.

There will be no détente because the left is incapable of reform. Its institutional inertia is systemic, as they might say in their internal jargon.

There will be no dialogue-mediated reconciliation because the left broke with reason. Dialogue without logic, or a belief in objective reality, is fruitless. To them, dialogue is either ineffectual or counterproductive, so it’s valueless. This is the ethos of postmodernism and why figures like Jordan Peterson refer to the left as “postmodern Marxists.”

It was a quick ride, in the grand scheme of things, from 60s-era equal voting rights for racial minorities to think pieces advocating for safe spaces for “people of color” free from white people because their presence is offensive and threatening published in state-funded mainstream academic papers.

The squeaky wheel gets the oil, just as the cringest, most disconnected-from-reality Social Justice© pioneer carries the day and directs the culture. There are no effective checks — not least of which because the extremely insular subculture has a zero-tolerance policy on challenging orthodoxy.

The left will march onward in more radical ways vis-à-vis the culture war, even when populations that the left believes it is entitled to foster reject its fruits.

For instance, “Latinx” is engineered social-justice jargon referring to “a person of Latin American origin or descent (used as a gender-neutral or nonbinary alternative to Latino or Latina).”

Actual Hispanics not knee-deep in the social justice religion hate the term “Latinx.” Despite its prevalent use in corporate media, polling found that “just 3% [of Hispanics] say they use it to describe themselves.”

But the left won’t let it go because they are totally inflexible and actually want to go further:

“Both Latinx and Latino are anti-Indigenous, like the term Hispanic, often seen as centering Spanish colonizers. The term ‘Latin’ is Eurocentric and centralizes whiteness. By adding an ‘x’ or an ‘e,’ we’re just playing with a colonial identity.”

They won’t stop until they’ve resurrected some dead Native American language, established it as the lingua franca, and force fed it to the youth via public schools and media.

The social-justice left is a conquering force that colonizes every culture it touches. It is not there to protect or to champion token “marginalized identities”; it is there to assimilate.

It is the Borg.

The big kahuna, the prize cultural kill, the one that got away — which the social engineers haven’t been able to shake out of its roots just yet — is the populist American right (broadly speaking) entrenched in Middle America — “flyover country,” as coastal elites enjoy deriding it.

The state embraces and fuels the SJW crazy train because it serves a utility — currently.

For the corporate state’s part, it’s more than happy to see the foundations of human identity chipped away at — like the shared sense of culture and history, the family unit as the social building block, and institutions that have historically lent transcendent spiritual meaning and identity (like the church).

A common identity is antithetical to transhuman techno-utopia.

Short of declaring all-out war on its own citizenry, the corporate state that currently subsidizes the corporate left has cleared every lower rung on the escalation of force ladder — including weaponizing the surveillance and law enforcement national security apparatus against “domestic terrorism.”

A growing constellation of aligned individuals and groups on the right (which, more and more, just includes normal people who resist assimilation into the woke technocracy) increasingly wises up to the dynamics here.

Legacy Americans still remember when America was ascendant, had a middle class, and wasn’t torn apart by vicious assaults on its most fundamental ideas.

Now it is. Now, fat, diverse feminists in sequin loincloths twerk with James Madison’s flute for the singular purpose of denigrating American mythology, the Founding Fathers being central to it.

The statues and the flutes are just appetizers. They will target anything and everything that even remotely smacks of Americana with increasing frenzy.

The Maoist Cultural Revolution of the 1960s targeted for destruction the “four olds”:

The “four olds” lent connection to the past; the past stood between the Communist party and full totalitarian control of the economy, state, and culture. So they had to go.

And go they went.

What’s occurring in the West is a new-age, transnational Cultural Revolution with a technocratic overlay.

What the 60s-era Chinese government didn’t have, but the U.S. government does, is near-ubiquitous surveillance of everyone all the time (as revealed by Snowden’s leaks) and predator drones, among other advantageous tactical tools at its disposal.

If the arc of the historical original Cultural Revolution is any roadmap, things are going to get a lot darker before the light.

What better time than now to enlist in a parallel society/economy?

Decapitated body of Philadelphia woman found on kitchen floor; police arrested her partner
If mRNA is now being found in breast milk, then covid “vaccine” safety claims are lies
Jean-Pierre calls ‘Twitter files’ revelations about censorship of Hunter Biden laptop story a ‘distraction that is full of old news’
Are FedEx and UPS tracking gun ownership for Biden White House?
The Dynamic of the Iran Protests is Changing as Armed Conflict Ignites in Separatist Regions