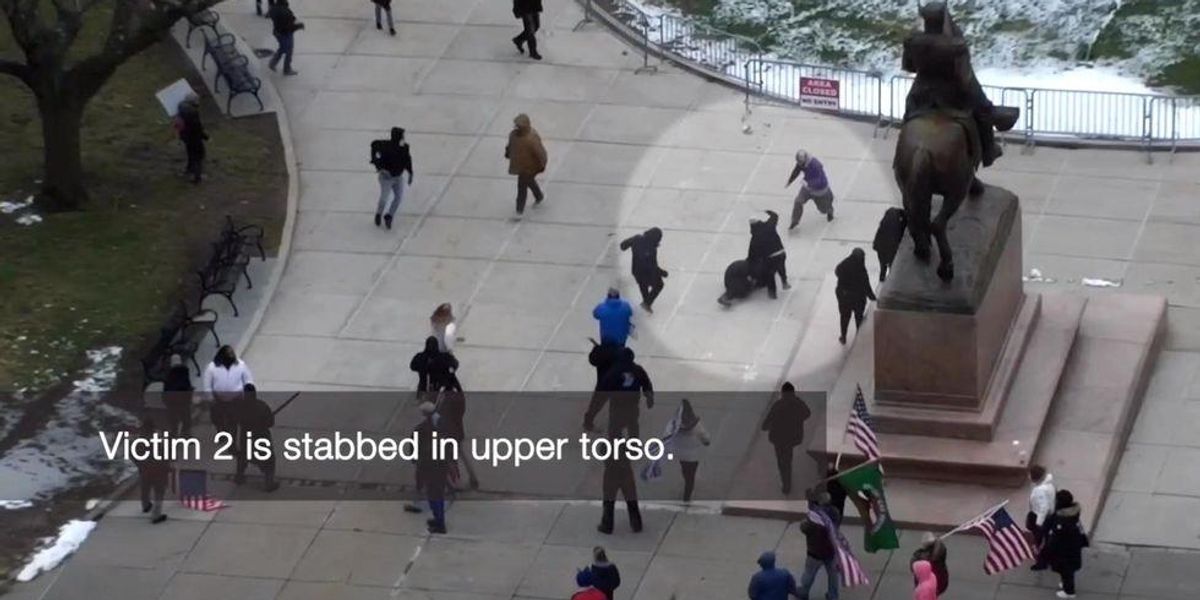 A journalist poet tied to the left-wing Antifa group was convicted of stabbing Proud Boy members at a Jan. 6 protest at the New York state capitol.

Alexander Contompasis was convicted by an Albany jury on Friday of first-degree assault and other charges related to the stabbing from 2021.

While the rioting at the U.S. Capitol unfolded, a fight between Trump supporters and Antifa supporters broke out at the protest as captured on surveillance video.

The Times Union obtained video of the attack and showed how a fight between Trump supporters and Antifa supporters ended in two stabbings. A person was seen on the video swinging wildly at Trump supporters before police swept in to break up the fight. The attacker walked off as the video ends.

Multiple arrests were made the incident and one of the victims suffered an eviscerated bowel. Police said they found a knife in Contompasis’ car that they believed was used in the assault.

One of the victims said that he was approached by an Antifa member after he was stabbed and claimed that he said to the victim, “I’m coming for you. I know who you are. I know where you live.”

The man’s attorney had argued in his defense that he was just defending himself from an “unprovoked” attack by the Proud Boys.

Police later identified the man as Contompasis and charged him with the attack. Prosecutors noted that the man had published posts on social media supportive of the Antifa political group. He also identified himself as an independent journalist and a poet.

He claimed that he was not a member of Antifa.

Contompasis could face as many as 40 years in prison for the charges when he is sentenced on November 18.

Here’s the video of the attack:

Jean-Pierre calls ‘Twitter files’ revelations about censorship of Hunter Biden laptop story a ‘distraction that is full of old news’
Training Video Shows Children of Local Teachers Being Killed In Fake School Shooting
A Wiener Without a Clue
NPR Loses $20 Million In Corporate Sponsorships, Implements Hiring Freeze
NewsBusters Podcast: The US Hostage In Iran Rooted for Iran to Beat US?