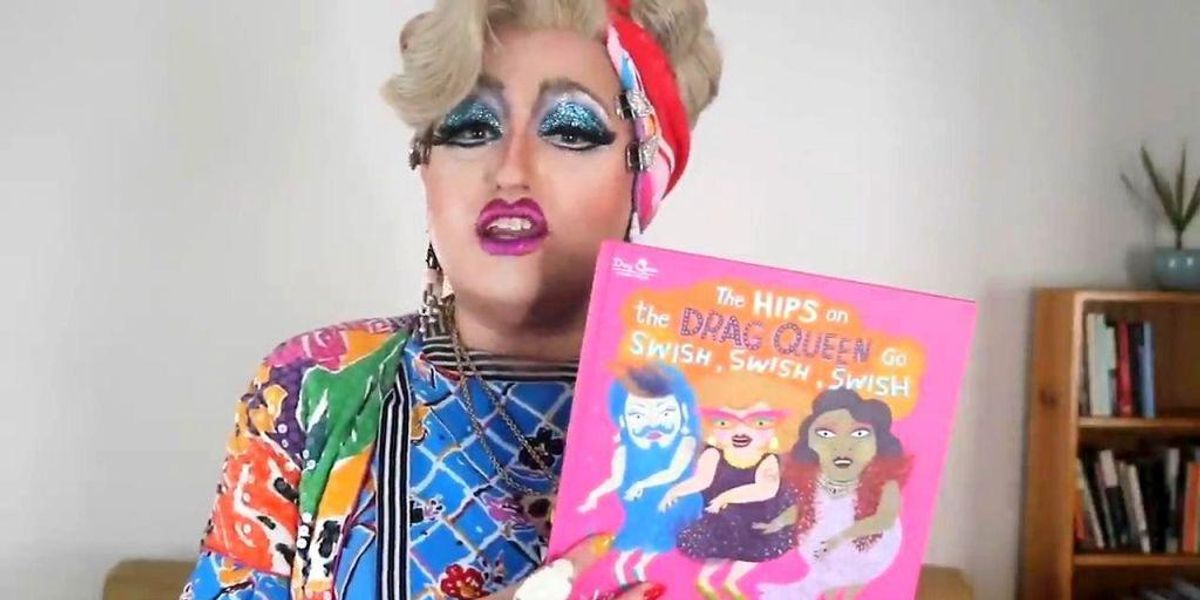 Drag queen “Lil Miss Hot Mess” is accusing Republican Sen. Marco Rubio of “bigotry” after the lawmaker from Florida called out the radical left in a campaign ad that included a brief video clip of the cross dresser engaging in a story reading event for kids.

“The radical left will destroy America if we don’t stop them,” Rubio says in the campaign ad. “They indoctrinate children,” Rubio says as a clip of Lil Miss Hot Mess briefly appears on the screen. Rubio then continues by saying that the left tries “to turn boys into girls,” as an image of what appears to be another drag queen with a child appears on screen.

Rubio, who took office in 2011, is currently running for a third term during the 2022 election.

In a video, Lil Miss Hot Mess defended Drag Queen Story Hour events, saying, “We’re simply out here reading books to children, encouraging them to use their imagination to envision a more just and fabulous world.” The drag queen accused Rubio of engaging in “hateful, homophobic, and transphobic bigotry.”

u201cDrag Queen Story Hour board member @LilMissHotMess was surprised to see herself appear in a Marco Rubio campaign ad. Here, she claps back in a GLAAD exclusive.u201d

“It’s ridiculous to come after drag queens for simply reading books to kids,” the drag queen said, according to NBC News.

Earlier this year, Lil Miss Hot Mess criticized Rubio after the senator issued a letter to Air Force Secretary Frank Kendall calling for the cancellation of a drag queen story event that had been slated to occur in Germany.

“I urge you to immediately cancel this politically divisive event, and take appropriate disciplinary action against all involved in allowing this gross abuse of taxpayer funding to place children in a sexualized environment,” Rubio had said in the letter.

“Though the events planned at the Ramstein AFB in Germany had no affiliation with our nonprofit—and importantly, I am speaking as an individual, not a representative of DQSH—Rubio’s comments attack not only on these events, but the broader work of DQSH and lives of LGBTQ+ people,” Lil Miss Hot Mess tweeted. “Shame on you, Senator.”

The event was ultimately cancelled. “An advertisement was posted to the base library social media page before the event had completed Ramstein’s established processes for special observance coordination and approval,” Lt. Col. Will Powell, chief of public affairs for the 86th Airlift Wing at Ramstein said, according to the Air Force Times. “The advertisement has been removed and the event will not take place.”

Lil Miss Hot Mess is the author of the children’s books “If You’re a Drag Queen and You Know It” and “The Hips on the Drag Queen Go Swish, Swish, Swish.”

“Parents and educators often assume that what children can learn about most from drag performers is to challenge gender stereotypes and celebrate diverse LGBTQ leaders and histories. While these are certainly important learning objectives, drag is also a creative portal to a new world; through drag we’re able to see those elements of society that are a hot mess and find the courage and creativity to change them,” Lil Miss Hot Mess wrote in a piece posted earlier this year.

While many parents consider it highly inappropriate for cross-dressers to read stories to children, some people support such programs.

“Drag storytellers, and the libraries and schools that support them, are advancing a love of diversity, personal expression, and literacy that is core to what our city embraces,” New York City Mayor Eric Adams, a Democrat, said in a statement in June.

“I had the honor of assisting with a Drag Queen Story Hour in New York in April,” Democratic Rep. Carolyn B. Maloney of New York tweeted in June.

u201cGreat interview w/ @LilMissHotMess! nnI had the honor of assisting with a Drag Queen Story Hour in New York in April.nhttps://t.co/Tcliyhubc6u201d