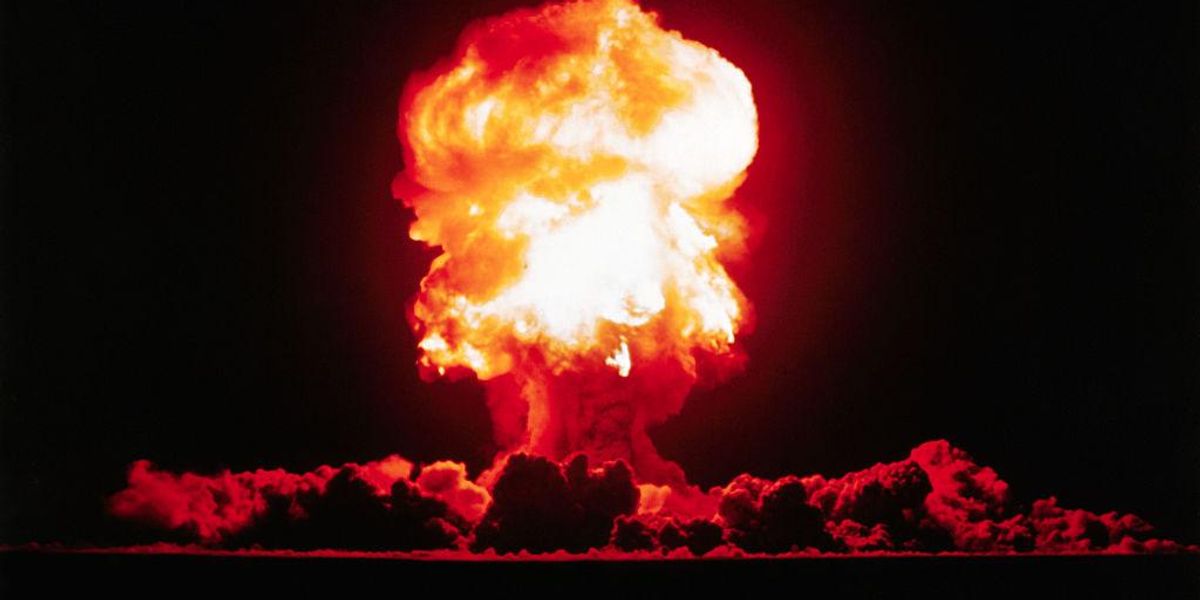 On Thursday, at a Democrat fundraiser in New York City, President Joe Biden claimed that Russian President Vladimir Putin was “not joking” about his “potential use of tactical nuclear weapons or biological or chemical weapons.”

Biden suggested the reason for Putin’s alleged willingness to risk a nuclear confrontation with the West is that “his military is, you might say, significantly underperforming.”

The president told Democratic Senatorial Campaign Committee donors at James Murdoch’s house, “We have not faced the prospect of Armageddon since Kennedy and the Cuban Missile Crisis.”

White House press secretary Karine Jean-Pierre said on Tuesday that there was yet no “indication that Russia is preparing to imminently use nuclear weapons.”

In his September 22 speech to the United Nations, Biden condemned Russia, suggesting it stood as the chief threat to global peace. He characterized Putin’s previous warnings as “irresponsible nuclear threats.”

Biden stated, “A nuclear war cannot be won … and must never be fought.”

Earlier this week, CIA Director William Burns told CBS: “We have to take very seriously [Putin’s] kind of threats given everything that’s at stake,” but indicated that U.S. intelligence had no “practical evidence” that Putin was on the verge of executing the nuclear option.

On September 21, Putin stated, “I want to remind you that our country also has various means of destruction, and for separate components and more modern than those of NATO countries.” Putin may have been referring to Russia’s hypersonic missiles, which can fly up to fifteen times faster than the speed of sound, its quiet-running submarines or its modernized nukes.

“When the territorial integrity of our country is threatened, to protect Russia and our people, we will certainly use all the means at our disposal,” he said.

Putin added, “This is not a bluff. And those who try to blackmail us with nuclear weapons should know that the weathervane can turn and point towards them.”

Putin’s emphasis that he was not bluffing was likely in reference to the following remarks made by Ukrainian President Volodymyr Zelenskyy in March: “I think that the threat of nuclear war is a bluff. It’s one thing to be a murderer. It’s another to commit suicide. Every use of nuclear weapons means the end for all sides, not just for the one person using them.”

Chancellor Olaf Scholz of Germany suggested that Putin’s remarks were those of a “misguided” man who had only too late come to understand that he initially “underestimated the situation. … He’s desperate.”

Josep Borrell, vice president of the European Commission, noted that “Putin says that he is ready to use all arms at his disposal, and when someone says ‘all’ he also means explicitly nuclear arms.” Borrell called for the U.N. to act.

Prague-based military analyst Yuri Fyodorov told Reuters Putin was bluffing in the interim, but that may soon change “in a week or a month from now … when he understands the war is lost.”

Chechen leader and Putin appointee Ramzan Kadyrov recommended in a Telegram post that “more drastic measures should be taken, right up to the declaration of martial law in the border areas and the use of low-yield nuclear weapons.”

Kadyrov’s suggestion came after Russian forces were forced to retreat from the city of Lyman, southeast of Kharkiv in the eastern Donetsk region of Ukraine.

On September 30, Putin announced his intentions to annex the eastern portions of Ukraine (i.e., the Donetsk, Luhansk, Kherson, and Zaporizhzhia regions). In his speech, Putin accused the U.S. of setting a nuclear weapons “precedent” by bombing Japan in 1945, effectively ending the Second World War.

Reuters reported that Russia’s criminal annexation of 18% of Ukraine greatly heightens the risk of nuclear war, as “Putin could cast any attack on these territories as an attack on Russia itself.”

Putin would not require an initial nuclear volley by the West to justify his regime’s deployment of nukes. After all, Russia’s nuclear doctrine calls for nuclear retaliation after “aggression against the Russian Federation with conventional weapons when the very existence of the state is threatened.”

Extra to the nuclear threat, Putin has also called up 300,000 Russian troops for new attacks on Ukraine.

On Thursday, Zelenskyy told an Australian policy-focused think tank that NATO should “eliminate the possibility of Russia using nuclear weapons,” recommending “preemptive strikes, so that they’ll know what will happen to them if they use nukes, and not the other way around.”

Zelenskyy added, “Don’t wait for Russia’s nuclear strikes, and then say, ‘Oh, since you did this, take that from us!'”

u201cNEW – Ukraine’s Zelensky calls on NATO to launch “preemptive strikes” against Russia to “eliminate the possibility” of a Russian nuclear strike.nnhttps://t.co/gj6mSRZfFFu201d

Zelenskyy’s office later indicated that the Ukrainian president was not calling for a “preemptive” nuclear strike on Russia. Nevertheless, the Kremlin interpreted that to have been his meaning.

A Kremlin spokesman said Zelenskyy’s comments “are nothing but a call to start a world war,” which would result in “unforeseeable disastrous consequences.”

A subsequent statement from Zelenskyy’s office reiterated “only the terrorist state Russia can afford to blackmail the world with explosions … and hint at the use of nuclear weapons, and Ukraine will never make such calls.” The statement also indicated that “the US administration, together with its partners, is discussing a response plan in the event of the use of nuclear weapons by the Russian federation.”

Preparing for the worst

The U.S. government is taking preparatory steps in the event diplomacy fails. On Tuesday, the Department of Health and Human Services announced that it was purchasing a supply of the drug Nplate, which has been FDA-approved to “treat blood cell injuries that accompany acute radiation syndrome in adult and pediatric patients.”

Acute radiation syndrome occurs when a person’s “entire body is exposed to a high dose of penetrating radiation” — the kind resulting from a nuclear explosion or a dirty bomb. Nplate serves to reduce radiation-induced bleeding by stimulating the body’s production of platelets. The drug can reportedly be used in both adults and children.

Ukraine is similarly preparing in the eventuality that nuclear weapons are used in the war. Its capital city of Kyiv is readying evacuation centers and ensuring sufficient stock of potassium iodine pills are on hand. Such pills help protect against radiation absorption.

Nukes and their power

According to the Federation of American Scientists, Russia has an estimated 5,977 nuclear warheads. That total includes 1,588 deployed strategic nukes; 2,889 reserve, nondeployed nukes; and 1,500 stockpiled and retired nukes.

The Washington Post reported that standard modern nuclear bombs have yields equivalent to 500,000 and 1 million tons of TNT (i.e. 500 kilotons and 1 megaton). The nukes dropped on Hiroshima and Nagasaki had, by comparison, yields of 15 and 21 kilotons, respectively.

In the way of nuclear warheads dropped to date, Russia holds the record for the most powerful ever exploded. In October 1961, the Soviets dropped “Tsar Bomba” over Siberia. This particular bomb had a yield of at least 50 megatons (i.e. the equivalent of 50 million tons of TNT).

So-called “low-yield” nukes, like those Kadyrov recommended Putin use to cover Russian retreats, are still incredibly more powerful than the 2020 Beirut explosion, which injured over 7,000 and killed 218.

Tucker Carlson asked BlazeTV’s Jason Whitlock to break down why Apple is threatening to remove Twitter from its app store
Senator John Kennedy Criticizes Biden’s Energy Policy As Only He Can (VIDEO)
2 former Democrat public officials who pleaded guilty to vote-buying conspiracy sentenced to prison
DeSantis Continues to Look Like the Safer Bet in 2024
Bill Clinton tests positive for COVID-19, urges people to get vaccinated and boosted