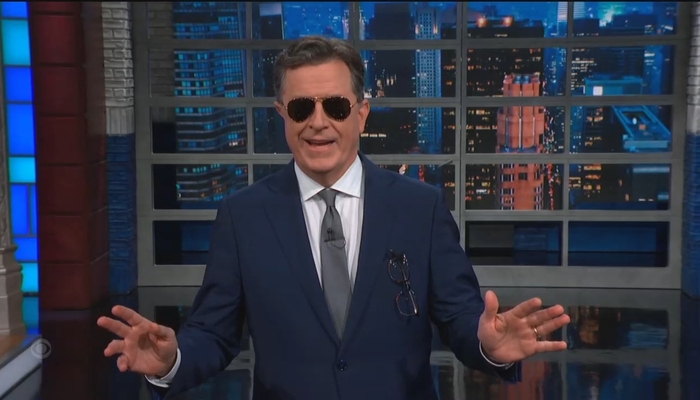 Joseph Wulfsohn at Fox News reports that audiences are leaving the Old Media late-night “comedy” shows now the Trump era is over, but the #Resistance model of partisan hot takes remains.

CBS star Stephen Colbert was the king of late night as “The Late Show” became the most-watched late night show in the Trump era, averaging roughly 3 million viewers from 2017-2019.

But with Trump out of office, Colbert’s liberal audience has shrunk to a 2.1 million viewer average in 2022, shedding 27 percent of his peak audience and losing his title as King of Late Night in recent months to Fox News host Greg Gutfeld, whose show “Gutfeld!” has edged out the CBS rival with 2.2-2.4 million viewers as of late.

The executive producer of his show in the Trump years was current CNN president Chris Licht — which is one reason why people don’t trust Licht’s pledge to add some fairness and straighter news to CNN.

“Colbert courts as many big name Democrats as he can because he’s an activist first and a comic second,” comedian and Fox Nation host Jimmy Failla told Wulfsohn. “His entire point of being is to help Democrats feed moral superiority to viewers because that’s what the Democratic ethos runs on.” Perhaps one of the greatest falls in late night is that of NBC Tonight Show host Jimmy Fallon, who remains the closest example of the old Johnny Carson we-kid-because-we-love style. In 2016, Fallon led the late-night race with 3.3 million viewers. But now, in 2022, it has averaged 1.4 million, a loss of nearly 60 percent of its audience.

ABC host Jimmy Kimmel explicitly told anyone opposed to his liberal editorializing to go watch somebody else: ”If they’re so turned off by my opinion on health care and gun violence, then, I don’t know, I probably wouldn’t want to have a conversation with them anyway… Not good riddance, but riddance.” That has happened:

The shrinking audiences have been systemic among the liberal comics. CBS’s The Late Late Show starring James Corden has lost 36% of its viewers since 2016, now averaging an audience of 819,000. NBC’s Late Night with Seth Meyers has slashed nearly half of its viewers between 2016 and 2022, going from roughly 1.5 million to 786,000. HBO’s Last Week Tonight with John Oliver has lost nearly 60% of its viewers since 2017, drawing an average 528,000 viewers this year.

What Oliver lacks in audience he might make up in liberal prestige: he’s won the “Outstanding Variety Talk Show” Emmy for seven times in a row, which could have inspired Daily Show host Trevor Noah to pack it in, since his predecessor Jon Stewart won that Emmy in the late-night space year after year before that.

Elon Musk says he would back Ron DeSantis for president in 2024
Homeschool your kids — they may be thankful that you did
NYT Repelled by New ‘Deeply Conservative’ Congress ‘Bedevil[ing]’ Poor Biden
70-year-old Marine veteran fighting for his life after braving devastating rowhouse explosion to rescue strangers
Supreme Court rules against Trump, upholds order to turn over his taxes to House Democrats