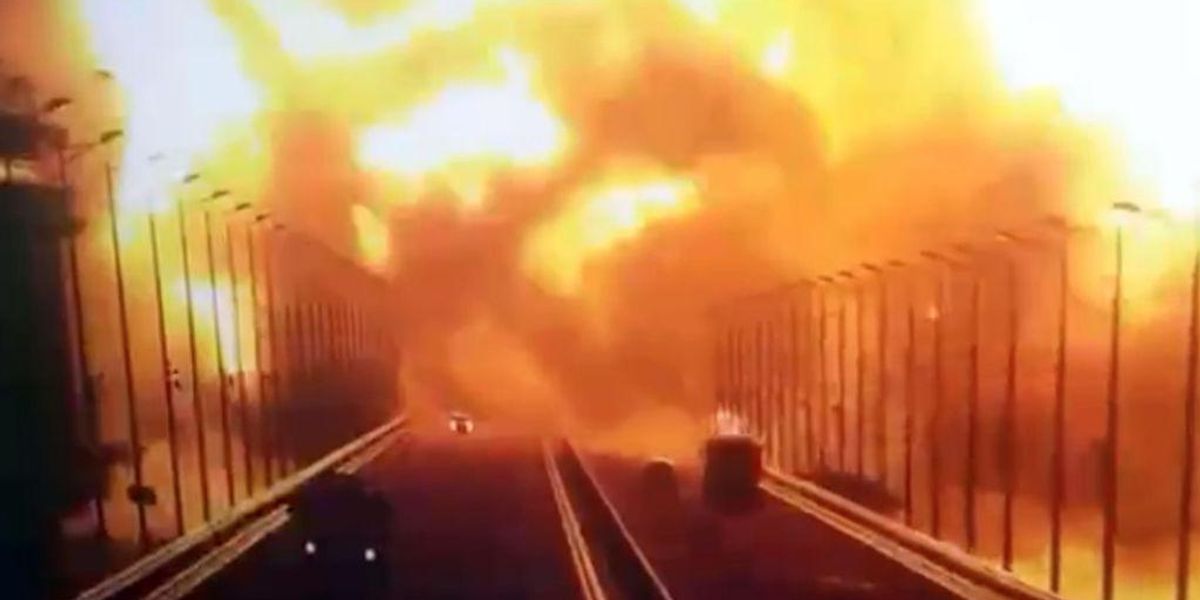 A surveillance camera captured video of the moment that a bomb detonated and blew up a large portion of a key bridge connecting Crimea with Russia. A Ukraine official vowed that the huge explosion is only “the beginning.”

At sunrise on Saturday, a massive explosion destroyed part of the Kerch Bridge – a 12-mile road and rail bridge that links Crimea and Russia. Part of the bridge collapsed into the Kerch Strait. Russian authorities said three people were killed in the blast.

u201cThe security camera footage of the explosion on the Crimean Bridge.u201d

u201cWATCH: The Crimean Bridge, which connects Russia and Crimea, is on fire and has partially collapsedu201d

Russia’s National Anti-Terrorism Committee stated, “At 06:07 Moscow time today, an explosion was set off at a cargo vehicle on the motorway part of the Crimean bridge on the side of the Taman peninsula, which set fire to seven fuel tanks of a train that was en route to the Crimean peninsula. Two motorway sections of the bridge partially collapsed.”

Sergey Aksenov – the Russian-appointed Head of Crimea – confirmed that “two spans of the roadbed of the part [of the bridge] from Krasnodar to Kerch, collapsed.”

Mykhailo Podolyak – an adviser to Ukraine’s President Volodymyr Zelensky – did not directly take responsibility for the explosion, but said it was just “the beginning.”

“Crimea, the bridge, the beginning. Everything illegal must be destroyed, everything stolen must be returned to Ukraine, everything occupied by Russia must be expelled,” Podolyak said on Saturday.

David Arakhamia – leader of the Servant of the People party in Ukraine – wrote on Telegram, “Russian illegal construction is starting to fall apart and catch fire. The reason is simple: if you build something explosive, then sooner or later it will explode. And this is just the beginning. Of all things, reliable construction is not something Russia is particularly famous for.”

Oleksiy Danilov – the secretary of Ukraine’s National Security and Defense Council – posted a video of the Crimea Bridge on fire next to the 1962 video of Marilyn Monroe singing “Happy Birthday Mr. President.” Vladimir Putin turned 70 years old on Friday.

Russian Foreign Ministry spokeswoman Maria Zakharova declared, “The reaction of the Kyiv regime to the destruction of civilian infrastructure shows its terrorist nature.”

The Kerch Bridge – also known as the Kerch Strait Bridge and the Crimean Bridge – is the longest in Europe and was opened by Vladimir Putin in 2018. The $3.7 billion bridge crosses over the Kerch Strait – which connects the Black Sea to the Sea of Azov. The Kerch Bridge links Russia’s Krasnodar region with the Crimean Peninsula – which was annexed by Russia from Ukraine in 2014.

The Crimean Bridge can reportedly handle 40,000 cars a day and 14 million passengers, plus 13 million tons of cargo per year. The bridge gives Russia access to important Ukrainian ports such as Sevastopol, and is a critical supply route to transport fuel, goods, and military weapons into Crimea. At the time of completion, Russian media hailed the bridge as “the construction of the century.”

In 2021, Russian National Guard Chief Viktor Zolotov said, “The facilities of the Kerch transport link are today comprehensively protected on the ground, from the air and from the water and under the water.”

James Cameron — yes, the guy who directed ‘The Terminator’ — now says testosterone is a ‘TOXIN’
The RNC Chair Election Will Tell Us How Serious the GOP Is About Winning Again
Starlink: The Good, the Bad, and the Pretty Dang Impressive
‘Reckless driver’ crashes truck into two cars at a Walmart. Police said it was a dog with a ‘guilty look’ on its face.
Good Neighbors With Guns Detain Man Who Broke Into a Michigan Home With Children Inside