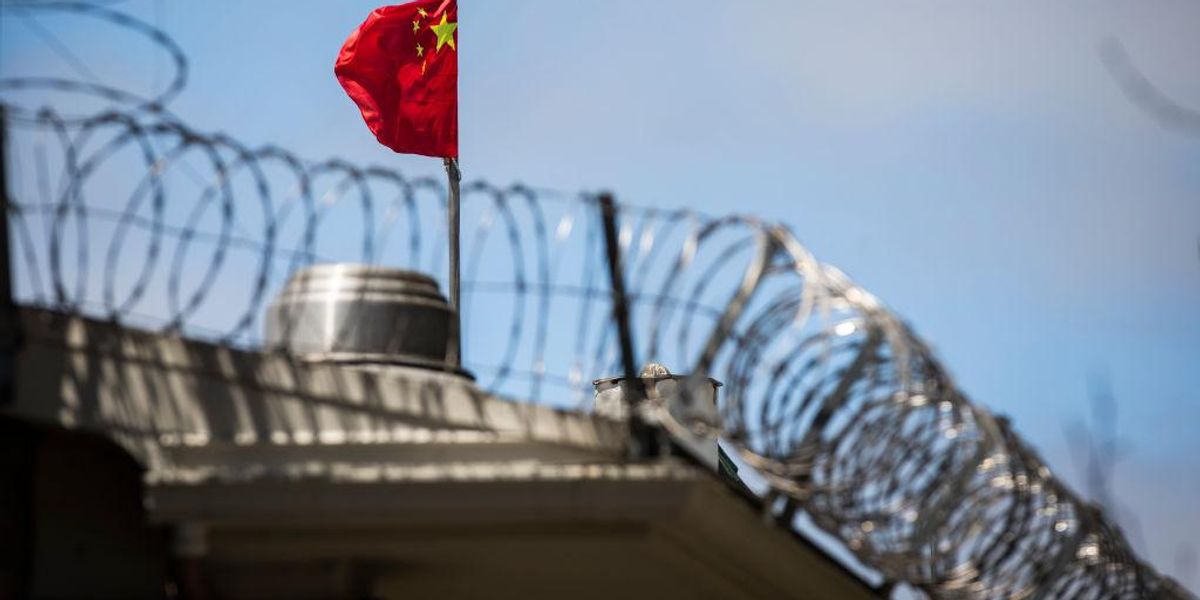 On Thursday, the United Nations’ human rights council voted on an American-led motion to hold a debate about human rights abuses committed by communist China against Uyghurs in the nation’s western region of Xinjiang. Of the council’s 47 nation state members, 36 voted: 19 against and 17 for the motion. The result, said to be an “abdication of responsibility and a betrayal of Uyghur victims” by Human Rights Watch’s China director, Sophie Richardson, is regarded as a win for the communist regime.

The motion proposed debate regarding the findings of a 48-page U.N. rights office report published on August 31 that detailed potential “crimes against humanity” in Xinjiang. While the U.S., the United Kingdom, Canada, France, and a number of other countries have already formally declared the Chinese communist party’s (CCP) internment and ethnic cleansing of the country’s Uyghur population a genocide, this debate would have invited greater international scrutiny.

The result of the vote also revealed China’s growing international influence and leverage over third-world countries.

A number of countries abstained from voting, including Brazil, India, Mexico and Ukraine.

u201cShameful #HRC51 outcome on human rights situation in #Xinjiang. OIC states fail to stand with Uyghur Muslims. Somalia the only African state to actually stand against systemic discrimination. Ukraine abstention betrays values of solidarity and accountability to which it appeals.u201d

In addition to the European powers, a handful of countries supported the American motion including the Republic of Korea, Japan and Somalia.

Though not surprised by the result, Olaf Wientzek of the German Konrad Adenauer Foundation suggested that it damaged the credibility of the UN and “shows China’s diplomatic clout.” He emphasized that the motion did not propose a monitoring mechanism, but simply debate, but “that was too much for many members.”

The U.K. ambassador in Geneva, Simon Manley, stated: “China’s attempts to stifle debate and hide the truth will not succeed.”

u201cMy statement following the vote on #Xinjiang at @UN_HRC u2b07ufe0fu201d

Marc Limon of the Universal Rights Group said, “It’s a serious blow for the credibility of the council and a clear victory for China … Many developing countries will see it as an adjustment away from Western predominance in the UN human rights system.”

A spokesman for the communist Chinese regime’s ministry of foreign affairs stated, “The issues related to Xinjiang are not about human rights. They are about countering violent terrorism, radicalization and separatism.”

Agnes Callamard, secretary-general of Amnesty International, said, “Today’s vote protects the perpetrators of human rights violations rather than the victims — a dismaying result that puts the U.N.’s main human rights body in the farcical position of ignoring the findings of the U.N.’s own human rights office.”

The topic for the precluded debate was the Human Rights Office of the High Commissioner’s report. This report countered the CCP’s claims that its suppression, internment, and murder of Uyghurs were justifiable as part of a broader “counter-extremism” strategy.

Among the report’s recommendations, it suggested that a thorough investigation be undertaken into “allegations of torture, sexual violence, ill-treatment, forced medical treatment, as well as forced labour and reports of deaths in custody.”

Uyghurs who have escaped China have detailed forced late-term abortions, routine tortures, and forced labor in China’s re-education camps (called “Vocational Education and Training Centers” by the CCP) where an estimated 1 million people have been confined in recent years.

Xinjiang itself has reportedly been transformed into an open air prison camp.

Uyghur neighborhoods are surrounded by militarized checkpoints. Those who want to leave are retinal-scanned. Each neighborhood is assigned a “grid monitor” who surveils their activities and ensures against their adherence to religious customs.

According to Nury Turkel, the chair of the U.S. Commission on International Religious Freedom, Uyghurs outside the camps are subjected to “a barrage of scans, tests and examinations … [including] retinal scans and fingerprints … blood or hair samples … for DNA profiling.”

The New York Post reported that they must also “read from a set text for forty-five minutes so their voices could be recorded and identified,” enabling spies to determine who was talking in tapped and taped communications.

Cullen Hendrix, a senior fellow at the Peterson Institute for International Economics, wrote that Xinjiang, home to nearly 12 million Uyghurs, “may be the most tightly controlled media environment on Earth, on part with North Korea.”

u201cUighurs sitting, bound and blindfolded, waiting to be loaded onto train cars and taken u2014 somewhere.nnDrone footage from an unknown hero in China.nn#Uighuru201d

A 2020 report from the Washington-based Center for Global Policy indicated that under the pretenses of a “poverty alleviation” scheme, the CCP forces an estimated 570,000 Uyghurs to to pick cotton by hand for the CCP.

Just as Christians who have fled China are hunted down internationally by the CCP, so too are Uyghurs. In fact, the recently exposed international network of communist Chinese police stations that operate in the U.S., Canada and Europe, reportedly help keep tabs on those who have escaped persecution in Xinjiang.

While touted as pseudo-embassies, the primary function of these forward operating bases is instead to compel persons to return to China whenever the regime has determined them to have broken Chinese law. Uyghurs who have fled China are regarded by the regime as lawbreakers.

In fact, many of the estimated 1,500 ethnic Muslim Uyghurs who were hunted down and detained in the Near East and North Africa have been extradited back to China.

According to a 2021 Freedom House report, “China conducts the most sophisticated, global, and comprehensive campaign of transnational repression in the world.” The CCP “targets many groups, including multiple ethnic and religious minorities, political dissidents, human rights activists, journalists, and former insiders accused of corruption.”

All of the nations that voted against the motion have been pulled into China’s sphere of international influence.

China, which has been materially supporting Russia during its war on Ukraine, has expanded this influence, in part, through its Belt and Road Initiative. Through its BRI, the CCP helps poorer nations build ports, rail lines and telecommunications networks, as well as secure financing. Since this assistance is usually unaffordable by design, the BRI transforms countries into politically malleable debtors. The Economic Times characterized BRI as one of “China’s colonial advances wrapped in benign global treaties.”

The New York Times reported that extra to economic leverage, some in the U.S. suspect that BRI is enabling China to build “a globe-spanning bloc of nations that will mostly buy Chinese goods and tilt toward China’s authoritarian political model.”

Every one of the countries on the human rights council that voted with China are part of the BRI. Somalia was the outlier, which is part of BRI but nevertheless took a stand.

Liu Mingfu, a retired colonel in the Chinese communist military, wrote a book to which Chinese president Xi Jinping has referred, entitled “The China Dream.” Liu, a proponent for communist Chinese global supremacy, characterized the competition between China and the U.S. not a “shooting duel” or “boxing match,” but as a “track and field” competition, or a marathon.

Michael Pillsbury, director of the Center on Chinese Strategy at the Hudson Institute, indicated in the book “The Hundred-Year Marathon” that elements of the communist Chinese regime have long aspired to “replace the United States as the economic, military, and political leader of the world by the year 2049 (the one hundredth anniversary of the Communist Revolution),” in part to “avenge or ‘wipe clean’ (xi xue) past foreign humiliations,” such as the Chinese addiction to opium in the 19th century.

Pillsbury stated that the CCP’s aim is “a world without American global supremacy.”

Pillsbury detailed how Liu and other influential Chinese political thinkers believe China to have a responsibility “to ‘improve’ all the nations and people of the world by ‘harmonizing’ them—spreading Chinese values, language, and culture so they can better fit into under heaven. This empire ‘values order over freedom, ethics over law, and elite governance over democracy and human rights.'”

In addition to evidencing China’s growing political clout, Thursday’s UN vote hints at the nature and priorities of the world order the CCP seeks to establish.

The Trump administration withdrew the U.S. from the council because of its inclusion of numerous human rights abusers such as China, Cuba, Pakistan and Venezuela. The U.S. was the first country in the council’s 12-year history to drop out voluntarily.

Then-U.N. Ambassador Nikki Haley said, “We take this step because our commitment does not allow us to remain a part of a hypocritical and self-serving organization that makes a mockery of human rights.” She added, “the Human Rights Council has been a protector of human rights abusers, and a cesspool of political bias.”

The Biden administration had the U.S. rejoin the council last year.