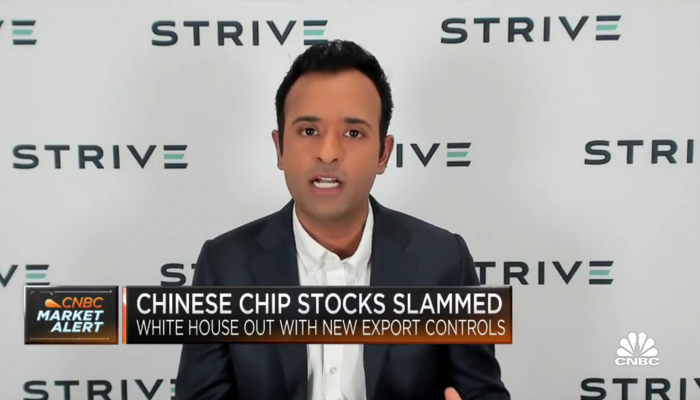 In yet another example of woke elites lecturing Americans on climate change at home while they invest in the genocidal Chinese Communist Party (CCP) abroad, BlackRock “raves” about its Chinese investments but makes “little mention of Taiwan,” Ramaswamy and former Secretary of State Mike Pompeo wrote in an Oct. 10 Wall Street Journal op-ed. In the column, Ramaswamy reminded Americans that leftist corporations like BlackRock are pro-climate change at home and pro-China abroad.

Ramaswamy railed against BlackRock’s woke hypocrisy on Twitter after his appearance on the Oct. 10 edition of CNBC’s Squawk Box:

“BlackRock waxes eloquent about climate & board diversity ‘risks’ without saying a peep about China-Taiwan risk. Here’s why: if they talk about it, they risk their own ability to do business in China.

“You can’t be a good fiduciary to U.S. clients with the CCP’s boot on your neck.” [Emphasis added].

BlackRock waxes eloquent about climate & board diversity “risks” without saying a peep about China-Taiwan risk. Here’s why: if they talk about it, they risk their own ability to do business in China.

You can’t be a good fiduciary to U.S. clients with the CCP’s boot on your neck. https://t.co/posuJf1Yh4

Central to China’s plan to dominate Asia and the world is the Taiwan Semiconductor Manufacturing Co. (TSMC) because it “produces more than half of the world’s advanced semiconductors and 90% of the most advanced chips,” Ramaswamy wrote. That’s bad news for Americans who rely on semiconductors to power their smartphones, cars and household appliances, according to The New York Times.

Ramaswamy continued: “[A]mid rising tensions, the world’s largest asset managers, many of which regularly warn U.S. portfolio companies about risks relating to climate change and board diversity, are conspicuously silent about Taiwan-related risks.”

Ramaswamy argued that BlackRock is a powerful tool for China to achieve its political goals.  “BlackRock’s behavior is unsurprising and may itself be part of China’s long-term strategy of influencing U.S. companies to advance its geopolitical goals.”

Ramaswamy contended that BlackRock has “been eyeing the lucrative Chinese asset-management market  for years,” lobbying the U.S. government for policies for lower tariffs and even launching Chinese mutual funds.

The Wall Street Journal highlighted BlackRock’s precarious position on China in an Oct. 9 article headlined “BlackRock walks a political tightrope on climate issues.” The story explained that BlackRock, the world’s largest investor, “is taking heat” from U.S. government officials because of its support for leftist environmental, social and governance (ESG) standards.

Let them eat cake: Delta Airlines announces that Sky Club members will no longer be able to use Sky Club lounge if they fly economy
Comedy Hosts Think Twitter Censoring Hunter Story Is About Nude Photos
NewsBusters Podcast: Free Beacon vs. the Biden-Friendly Press
N.Y. councilman switches to GOP, faults leftist policies for surging crime rates: ‘Democratic Party is doing everything possible in New York City to make everybody less safe’
‘We can no longer say this is a pandemic of the unvaccinated’: CDC data indicates vaccinated, boosted people together make up majority of COVID-19 deaths