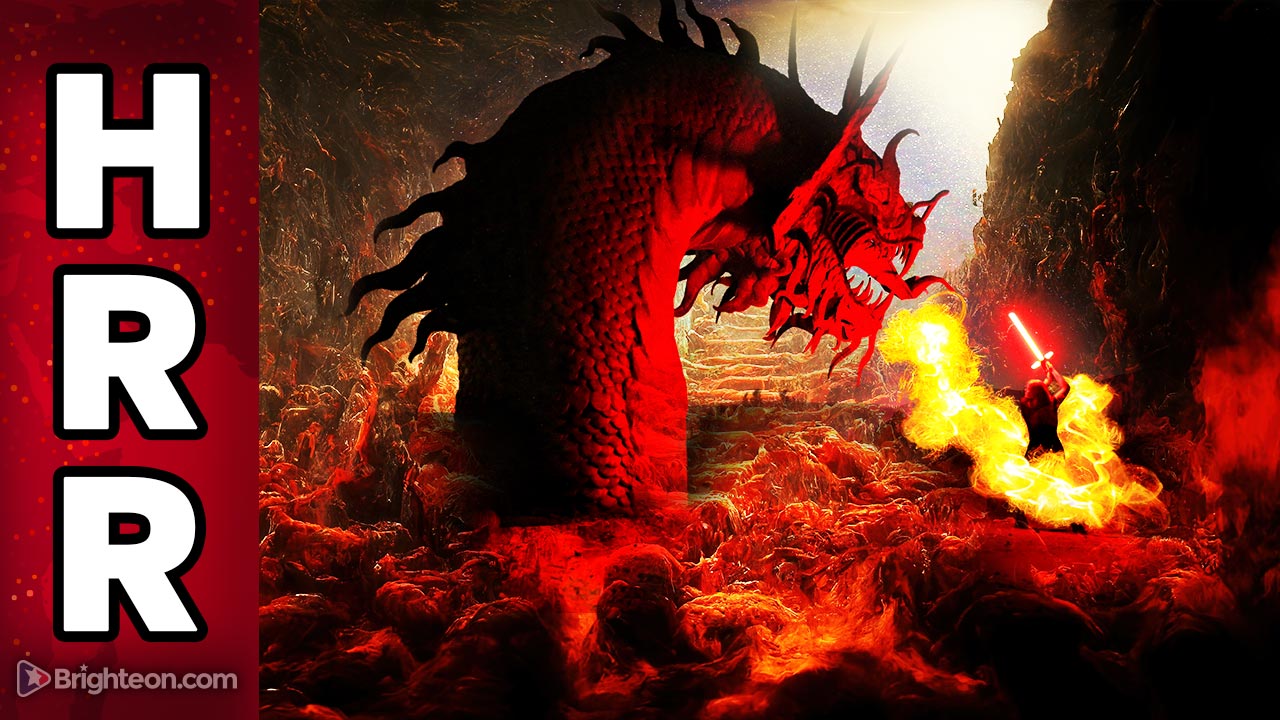 (Natural News)
An engineered global collapse is under way right now. If you’re reading this, you already know the score: The coming financial collapse, engineered mass famine, vaccine bioweapons, the possibility of nuclear war, the “great reset” agenda and much more. There’s no question the collapse — which has already begun — will be a chaotic event, and billions of people will needlessly suffer as globalists strangle world supplies of food, energy and money. However, the aftermath of the collapse also presents humanity with an opportunity to choose a different future after this current tyrannical system is wrecked. It is in this choice that humanity can find freedom and prosperity.

That’s the subject of my Situation Update podcast today (see below). This dynamic also reminds us that we must prepare to survive the collapse so that we can participate in the next society that rises out of the ashes of this current failed system. Only those with a heartbeat, obviously, will have a say in the structure of civilization in the post-collapse era.

To survive and thrive, humanity must shift from a centralized, “fake” civilization (fake news, fake science, fake plandemics, fake money, fake education, fake biology, fake terrorism, etc.) to a decentralized society rooted in morality and reality. This means bringing food production to the local level, where small-scale local farms provide redundancy and resiliency. Education must be local, too, instead of having children subjected to centrally-planned indoctrination agendas pushed by groomers and pedophiles pretending to be teachers and counselors.

The future of money will be found in decentralization, which gold and silver automatically achieve. There’s no central bank that issues gold, for example, and the supply is limited by the laws of physics and geology, since it’s very difficult to mine. Similarly, technologies also exist for decentralized financial transactions and decentralized speech where no central authority can decide to silence you because they don’t like what you’re saying.

Humanity can never be free as long as it suffers under centralized control. Fortunately for us all, that centralized system is self-destructing at an astonishing pace. And yet unfortunately for us all, that system will cause tremendous destruction as it goes down in flames, meaning that those who fail to prepare for the fallout may not survive the transition to a post-globalism world.

Over the weekend, PayPal released a new end user agreement which specifically declared that the company could steal $2500 from your PayPal account for each instance of “misinformation” in which you engaged. The Daily Wire first reported this and the story went ultra viral, evoking mass outrage from PayPal users who closed down their accounts en masse.

Within a day or so, in response to the erupting outrage, PayPal reversed itself and pretended that the specific language to loot $2500 from your account was somehow a typo. By late Sunday, The Epoch Times was reporting that PayPal issued a correction and backed off the deranged policy. (Close your PayPal account NOW. Don’t wait for them to steal all your cash for some absurd new reason they invent.)

Yet we all know this is exactly what PayPal plans to do at the first opportunity where they think they can get away with it. Even worse, we also know this is a pilot effort that was attempted as part of the “social credit score” system where even mainstream banks (or Central Bank Digital Currencies) will penalize you for engaging in anything the regime considers to be “misinformation.”

What is misinformation? Anything that’s true, it turns out: There are only two genders. Covid vaccines are killing people. SARS-CoV-2 was a bioweapon. The 2020 election was rigged. Climate change is a fraud. Inflation isn’t 8.3%, and so on.

In essence, any truth you might utter would earn you thousands of dollars in automatic fines. This is the future that’s in store for humanity if the current system stays in place.

The current system is rooted in pure evil, and we should celebrate its collapse

Fortunately for us all, the current system is already in a state of accelerating collapse. The fake fiat currency “money” system is on its last legs. The credibility of the western medical system and all its fake enforcers — CDC, FDA, HHS, Big Pharma — has utterly collapsed. The people no longer even trust the FBI or the DOJ, both of which the people see as being “weaponized” against conservatives, Christians and pro-life advocates.

Rather than fearing the collapse, we should welcome the change. What awaits humanity after the dumpster fire of this current tyrannical regime finally turns to ashes is a world of far more opportunity, abundance and freedom.

Imagine running a small business without forced lockdowns or 87,000 IRS agents stalking your accountant. Imagine a world where you have the right to buy firearms for self-defense without fear of being turned into a felony criminal by the ATF’s ever-changing (and maddening) rules. Imagine a world where the money you earn and save isn’t losing nearly 2% per month in purchasing power due to endless money printing by a central bank that functions as a criminal cartel, empowering satanists and criminals while funding endless wars and bio-terrorism.

Imagine a world where you can speak freely on all the dominant social media platforms without being banned or deplatformed. This is the world that’s coming after the collapse of this current luciferian system, and it’s a world that terrifies the tyrannical Left, because the only way they can remain in power is by cheating, censoring and threatening their way to dominance.

In today’s podcast, I discuss the “gullible class” of people and how they believe almost anything they hear from a so-called “authoritative” source.

The gullible class of people believe all the following:

As a result, the “gullible class” of people are: 1) Fully vaccinated, 2) Fully unprepared for disruptions or shortages.

This means that many of them will die from vaccine injuries, famine, scarcity, social unrest, and so on. Interestingly, as these are the people who interfere with a society rooted in freedom, abundance and the rule of law, their self-removal from society will help spur the adoption of new ideas that will make the next society more decentralized, resilient and free.

They are, in essence, speeding the evolution of human freedom by removing themselves from society through vaccine suicide, starvation and allowing themselves to be killed through violence that will erupt across blue cities when the financial collapse accelerates. (Remember, these people are anti-police and pro-criminal, and they are about to find out the consequences of such foolishness…)

The oblivious masses, in other words, are going to see their entire “reality” collapse. I’ve just released a mini-documentary that covers this exact phenomenon. You can watch it here:

Meanwhile, those who live in reality will be well positioned to help rebuild society with local, distributed small businesses that actually produce things (products and services) instead of merely existing to apply for government PPP loans and bailout money. If humanity can achieve an honest money system that’s backed by gold and isn’t subject to endless government currency printing, We the People will achieve unlimited prosperity from being able to keep and invest the money we earn from our ideas and effort. Simply ending the Big Government / central bank looting agenda will uplift the economic reality of every working person in the world, lifting billions out of poverty (or however many human beings are still alive after the global vaccine depopulation bioweapon runs its course).

Again, do not fear the collapse. Prepare for it and welcome it, for it is the next necessary step for humanity to bring down the global luciferian cult that currently runs the world, replacing it with a pro-human, pro-God, pro-life civilization that honors and respects life, liberty and the pursuit of happiness.

– Do not fear the collapse; it is NECESSARY for evil to be dismantled
– Prepare to REBUILD the next society with a new pro-human, pro-liberty structure
– “Antifragile” needs to be the structure of the next society: Decentralized, local, redundant
– Resilient prepping will get YOU through the collapse, alive and functioning
– Shifting to GOLD and SILVER will transition your financial assets to the post-collapse society
– The fall of Big Government, Big Pharma, Big Tech and Big Ag is a BENEFIT to the world
– #PayPal threatens to steal $2500 from each user’s account if they spread “misinformation”
– Morality and ethics are rapidly collapsing across modern society as luciferian agenda rises
– Analysis of the #Ukraine bombing of #Crimea bridge
– Interview with Jim Willie of Golden Jackass
– Why WE are the “white hats” who must defeat evil and dismantle tyranny

See more news each day about the coming collapse at Collapse.news

Elon Musk Agrees Twitter Censorship Targeted Conservatives, Not Leftists
Supreme Court rules against Trump, upholds order to turn over his taxes to House Democrats
Full of Hot Air: Paul Krugman Cries GOP Will ‘Undermine’ Biden’s ‘Successful Governance’
Couple duped into doling out $25,000 during despicable ‘Grandparents Scam’
Homeschool your kids — they may be thankful that you did