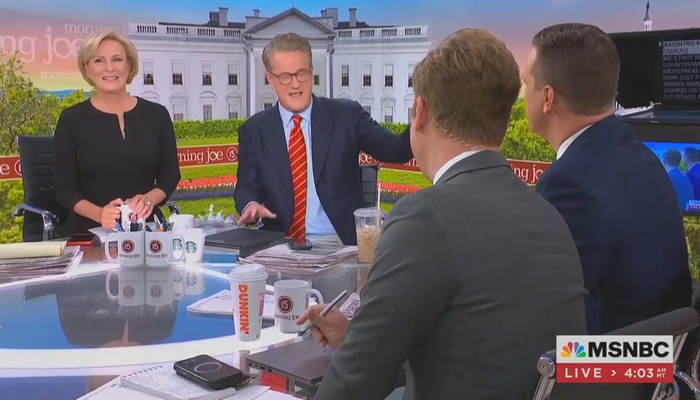 Joe Scarborough’s masculinity is so fragile that he needs to repeatedly brag about his toughness on national TV. Back in June, we caught Scarborough boasting that he would beat up Capitol tourists if he caught them taking pictures.

But he probably shouldn’t disparage other men for being “emasculated” by Donald Trump. That would be leading with his chin. The subject was Ohio Senate candidate J.D. Vance. At a recent Trump rally with Vance in Ohio, the former president told the crowd “J.D. is kissing my ass he wants my support so bad.”

Scarborough chose to open his Morning Joe show on Tuesday with a long rant about how he wouldn’t tolerate anyone who tried to “emasculate” him.

The irony is that in posing the question to Willie Geist as to whether he’d ever had a job where he’d allow someone to emasculate him, Scarborough could be seen as  attempting to emasculate Geist, who good-naturedly responded with an abashed smile, and laughter followed.

So eager was Scarborough to make his point, that he even paraphrased the late, great Rush Limbaugh’s line about men having their private parts put in a lockbox. So yes, you can be sure that if anyone ever tried to cut in line in front of Muy Macho Joe at Murray’s Toggery Shop on Nantucket, Scarborough’s favorite summering spot, Joe would send that person flying!

In reality, Joe Scarborough and his wife Mika were unabashed promoters of Trump in the early stages of his 2016 presidential campaign — when Hillary wanted him to win — then there was a falling out. No one might remember it any more, but “I Won’t Be Emasculated” Scarborough met with Trump to reconcile that September, as CNN reported:

Last week, Scarborough and his Morning Joe co-host, Mika Brzezinski, visited the Republican presidential nominee at Trump Tower to rekindle a once-rosy relationship that has turned bitter and adversarial, sources with knowledge of the meeting told CNNMoney.

The three also discussed the possibility of conducting an interview for Morning Joe, though nothing was decided or finalized, one of the sources said. Scarborough did not respond to a request for comment.

The meeting, which NBC and the Trump campaign both declined to comment on, comes after a summer of barbs and insults.

Translation: If Scarborough didn’t look like Trump’s media butler in the primaries, this meeting certainly belies the idea that he is unwilling to look “emasculated” for his political/media career.

Scarborough really needs to stick to the news, and work on his masculinity issues with his therapist. If anyone ever sacrificed his masculinity, or certainly his integrity, it’s Joe Scarborough himself, who built his career at MSNBC by sacrificing his erstwhile conservatism.

On Morning Joe, Joe Scarborough boasting that, unlike Republican Ohio Senate candidate J.D. Vance, he wouldn’t stand for anyone trying to emasculate him, was sponsored in part by Procter & Gamble, maker of Downy, GlaxoSmithKline, maker of Tums, 4Imprint, and Johnson & Johnson, maker of Listerine.

SCARBOROUGH: [much laughter on set] Because, I will tell you — oh, I guess I can’t say that. Your honor, strike that question. So Willie, how are the Yankees going to do . . .

MIKA: This applies to women, too. I wouldn’t take it. Talk about guys and gals.

SCARBOROUGH: I know, but I can talk about guys, because I’m a guy.

SCARBOROUGH: And it’s another thing, too. All of these guys that talk about a war on masculinity. I’ve given my very unpopular opinion, which is, if you’re a real man, you don’t know there’s a war on masculinity, right? You’re like, oh, that’s very nice. Thank you, yes, I feel terrible about myself.

GEIST: They write entire books about that, you mean?

SCARBOROUGH: And I swear to God, I’m getting to a point here. How fascinating that the very men in the Republican party who talk about a war on masculinity put their own manhood in a lock box for Donald Trump, and allow Donald Trump to insult them in front of their families, their friends, their communities, insult their wives, insult them constantly. And they just go along for the ride. I find this absolutely fascinating. And J.D. Vance is Lil’ Butters, he’s the same.

But you look at, and I don’t want to name any of their names because they have already been emasculated. You just look at these guys, these senators who completely, I’ll just say it. Rush Limbaugh said it in a bit more stark way, but I’ve gotten older so I won’t repeat it. They put their manhood in a blind trust. And they let him insult their families, insult their kids. It’s just unbelievable.