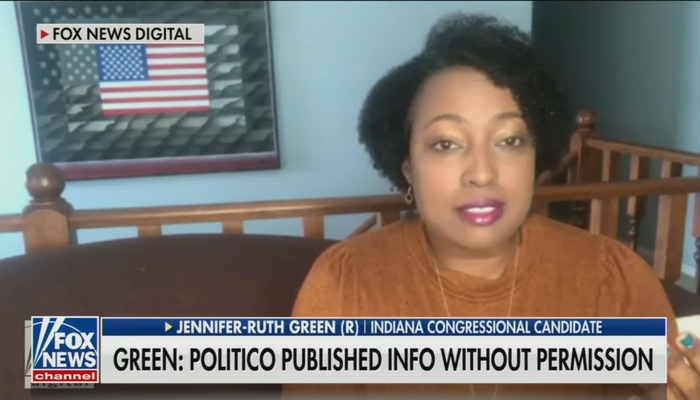 Over the weekend, left-leaning Politico got into very hot water after they targeted a black female Republican candidate for Congress, Jennifer-Ruth Green (IN), who they acknowledge “has a shot to flip a shot seat in Indiana that has voted Democratic for nearly a century.” In their salacious reporting on Friday, Politico writer Adam Wren exposed details of a sexual assault Green was a victim of while serving in Iraq, against her wishes.

Politico’s vice president of marketing & communications also went on the attack via Twitter, assailing those who called out the outlet.

In the piece titled “Jennifer-Ruth Green’s Surprising Flight Plan to Win in a Democratic District,” Wren plainly states the reason why she needed to be taken down. “This Black conservative woman has a shot to flip a seat in Indiana that has voted Democratic for nearly a century,” the sub-headline said.

Despite admitting Green had a “mostly stellar military record” and “received consistently high evaluations,” Wren brought attention to one incident where she essentially got punished for being sexually assaulted by an Iraqi soldier (click “expand”):

She left the group to climb into a cramped guard tower where Green says an Iraqi serviceman sexually assaulted her by grabbing her breast and exposing himself.

She said she was advised not to report the assault by a staff sergeant, who was also a military equal opportunity representative. He told her that “if American leadership complained to Iraqi leadership, they would continue to see women as liabilities and limit their ability to serve….”

The poor evaluation, which was performed by someone who was not in Iraq with Green, affected her ability to rise in the ranks and in 2012 she was removed from active duty as part of a larger force reduction, according to her records.

The Sunday following Politico’s reporting, Green’s campaign revealed in a statement that the documents Politico reported on were possibly obtained illegally and could have been shopped to them by her incumbent Democratic opponent, Congressman Frank Mrvan’s campaign. She also says the details were published against her wishes.

In comments to Fox News, Green suggested Mrvan and Politico shared a lot in common with her attacker. “The reality of it is – like I said at one point in my life to my assailant, ‘No. Please stop. Don’t.’ –  and he did what he wanted to do … This is the exact same situation all over again, all because there was a man who wanted some sort of gratification,” she said.

Politico defends its exposure of her sexual assault by claiming, without evidence, the documents “were obtained by a public records request and provided to POLITICO by a person outside the Mrvan campaign” and because “Green has not contested the authenticity of the documents.” Green says her military file had been “illegally obtained” because it was officially sealed and a FOIA request is not enough to unseal it.

Politico VP Brad Dayspring took to Twitter over the weekend to bitterly berate people who spoke ill about the report. “This story is an incredibly nuanced, deeply reported piece that looks at the totality of Ms. Green’s military career, which her team has placed at the forefront of her campaign. Read it, and tell me you think it’s not a balanced piece,” he said to conservative strategist Matt Whitlock.

At least you admit you haven’t read it. The military records in question are publicly available documents that can be obtained by a standard FOIA request.

“At least you admit you haven’t read it. The military records in question are publicly available documents that can be obtained by a standard FOIA request,” he rhetorically sneered at our friend Stephen L. Miller (@redsteeze).

Further in her statement, Green theorizes that “sharing my assault against the advice of some in my command” had caused her career to be “intentionally derailed.” “I have since appealed the incident with the military, and the entire issue is settled. Clearly, I have progressed as a military member, promoting to the rank of Lieutenant Colonel, and successfully completing a command tour,” she added.