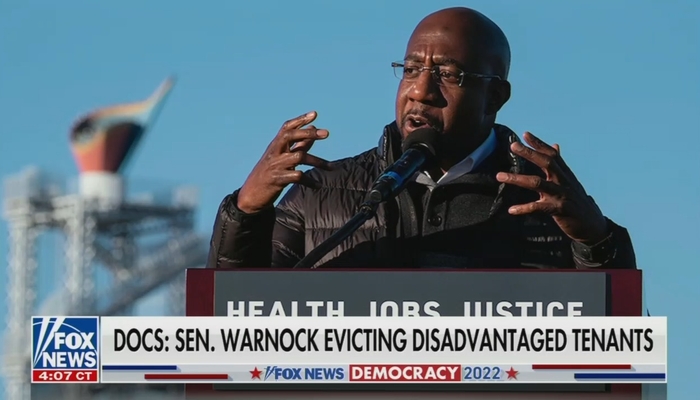 All three networks last week eagerly covered the allegation that Republican Senate candidate Herschel Walker paid for an abortion in 2009. But this week, with the claim that Democratic Senator Raphael Warnock — a pastor at Ebenezer Baptist Church in Georgia — is part of evicting the disadvantaged, the poor, and veterans from a church-owned apartment complex, they’ve shown no such zeal.

The ABC, CBS and NBC morning and evening shows on Tuesday and Wednesday ignored this scoop from The Washington Free Beacon:

Warnock’s Ebenezer Baptist Church, where the senator serves as senior pastor—drawing a salary as well as a generous $7,417 monthly housing allowance—has moved to evict disadvantaged residents from an apartment building it owns, one of whom it tried to push out on account of merely $28.55 in past-due rent.

By last Thursday morning, the same networks had devoted 27 minutes to the Walker allegations. And they were still covering it on Wednesday. On CBS Mornings, the show devoted another two minutes and 31 seconds. Reporter Nikole Killion mentioned that the “former football star [has] tried to move on from the controversy.”

On ABC’s Good Morning America, Linsey Davis grilled Walker about the claims (which he denies) for four minutes and 58 seconds. Davis demanded, “Did you ever to your knowledge give money to pay for the cost of an abortion?…. Is she lying?”

But nothing on these disturbing stories related to Warnock’s church. On Wednesday’s Fox and Friends First, however, co-host Todd Piro explained:

Over to Georgia, now, where Democratic Senator Raphael Warnock is reportedly evicting disadvantaged tenants in an apartment building owned by his church. New court documents reveal tenants are being kicked out over as little as $28.55 in past due rent. Many of those are veterans and people with disabilities. All of this while Warnock rakes in a pastoral salary of  $126,000 a year. But wait, there’s more.

That, on top of a $7400 monthly housing allowance. That’s high. That’s high for New York, much less Georgia. His opponent, Republican candidate Herschel Walker says he won’t let that happen, promising to cover overdue rent balances. Quote, “I will personally pay the $4,900 in past due rents to keep Reverend Warnock from evicting these people.”

Columbia Tower residents, who told the Free Beacon they were unaware that Ebenezer Baptist Church owns their building, described living under the rule of landlords who don’t hesitate to go to court to evict them and their neighbors, even if they’re just a few days short on rent.

“They treat me like a piece of shit. They’re not compassionate at all,” said Columbia Tower resident Phillip White, a 69-year-old African American who says he served in Vietnam and received an eviction notice on Sept. 20 for failure to meet a $192 rent payment. It was Columbia Tower’s second attempt to evict White, who received his first eviction notice in September 2021 for $179 in past-due rent. That case was dropped after White paid up, plus an additional $325 in fees, he told the Free Beacon.

If the hypocrisy story of pro-life Walker allegedly paying for an abortion is news then so is Warnock, a senator who has decried unfair evictions of “families at risk.” Journalists should ask Warnock about his church and that large $7,400 monthly housing allowance.

San Francisco approves ‘deadly force option’ for police robots
Canada Looks to Expand Assisted Suicide Law to Allow the Most Vulnerable to Choose Death
New study claims that ‘fear mongering and misinformation’ may be responsible for adverse effects attributed to vaccines
Elon Musk says he would back Ron DeSantis for president in 2024
On PBS, David Brooks Wishes for ‘Massive Cultural Shift’ to ‘European-Style’ Gun Laws