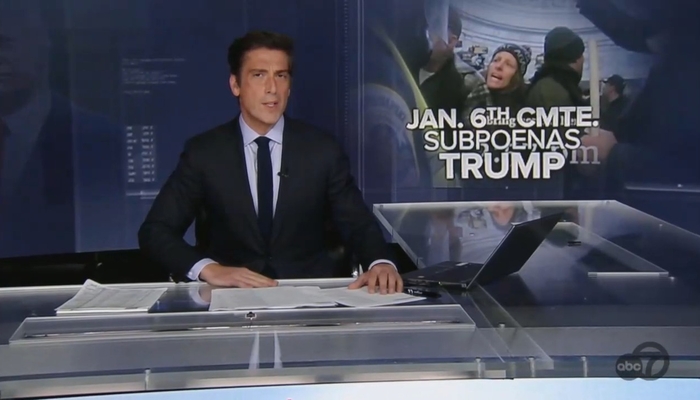 On Thursday, American consumers awoke to the news that they have been experiencing all along. That inflation continued to soar in September at a rate of 8.2 percent year-over-year and 0.4 percent over the previous month. This despite the Federal Reserve’s steady interest rate hikes meant to curb inflation. Yet, the three evening news broadcasts gave that news a back seat to the latest January 6 hearing into the riots at the Capitol.

ABC’s World News Tonight was the worst offender on this contrast in coverage. The network led with the news of the January 6 Committee voting to subpoena former President Donald Trump to testify before the committee. ABC devoted eight minutes and six seconds to the news while giving just 45 seconds to the red-hot inflation numbers.

Leading with the January 6 committee news, ABC’s Jon Karl led off the report by breathlessly reporting “in a stunning finale to what is expected to be its last hearing, the January 6 committee presented a never-before-seen video of Speaker of the House Nancy Pelosi fleeing the mob, as the U.S. Capitol came under attack by supporters of Donald Trump.”

“The central theme of the hearing—Donald Trump was responsible. He was the reason the attack happened,” Karl added.

Later on in the broadcast, anchor David Muir finally got around to reporting on the horrific inflation numbers:

We turn now to the economy and to the new numbers on inflation in the U.S. It remains stubbornly and painfully high. Consumer prices in September 8.2 percent higher than a year ago. Moderating slightly from August, but not what analysts were hoping for. President Biden acknowledging today Americans are hurting.

On CBS, anchor Norah O’Donnell gave her report on inflation, noting that it “remains near a record high and shows no signs of slowing.”

Leading with January 6, O’Donnell hyped the drama in the committee room “it was a dramatic ending to what’s expected to be the final January 6 hearing, a vote to subpoena former President Trump to appear before Congress.”

Just like ABC & CBS, NBC also led on January 6 and gave a brief report on skyrocketing inflation, with anchor Lester Holt announcing that today’s report was “confirmation of what most of us see every time we go shopping. Inflation remains on fire with prices up 8.2 percent a year ago, signaling more painful interest rate hikes to come.”

The three networks prioritizing the never-ending January 6 show trials over 40-year-high inflation that is hurting every American was made possible by Liberty Mutual on ABC, Progressive on CBS, and TD Ameritrade on NBC. Their information is linked.

Republican Jewish Coalition issues a scathing condemnation of Kanye West after shocking statements on Alex Jones’ show
One dead, others injured after ‘rogue wave’ strikes Viking Polaris ship
Warnock Is Just as Weak a Candidate as Walker
Video: Fugitive hiding under mattress opens fire on cops who were searching for him. It doesn’t end well for suspect.
James Woods to sue DNC over collusion with Twitter to censor Americans’ speech: ‘Scratch a liberal, and you will find a fascist every time’