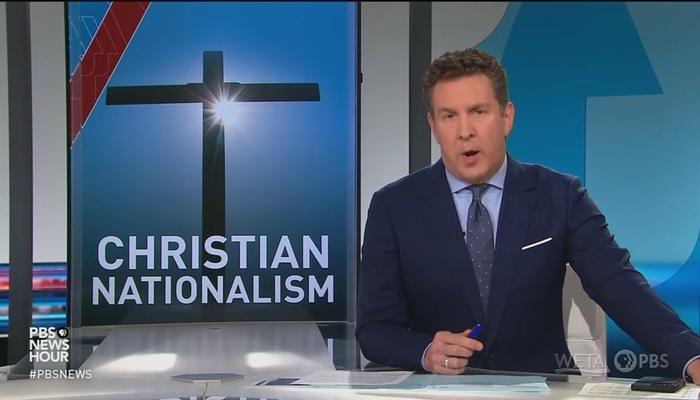 On October 11, the PBS NewsHour warned all about the threat of right-wing “Christian nationalism” and what it means for the midterm elections. Anchor William Brangham reported “A growing movement led by right-wing politicians is increasingly challenging a centuries-old value of America’s political system, the separation of church and state.”

Media liberals hate the idea that Republicans lean on religion for their political ideas. They are so aggressively for separating church and state that they almost think religious conservatives shouldn’t be allowed to vote, since they’re a threat to democracy – or at least to the Democrats.

The NewsHour found an agreeable expert for their secular feminist worldview. It was a professor of gender studies named Kristin Kobes DuMez, author of the book Jesus and John Wayne: How White Evangelicals Corrupted a Faith and Fractured a Nation.

Christians apparently don’t corrupt a faith when Rev. Raphael Warnock runs for office as a “pro-choice pastor” or politicians embrace a “religious left” that pushes amputations of breasts or penises as “gender-affirming care.”

According to DuMez’s book, this macho John Wayne heresy means that conservative white evangelicals allegedly link the gospel to “patriarchal authority, gender difference, and Christian nationalism, and all of these are intertwined with white racial identity.” On PBS, DuMez offered the bizarre theory that conservative Christians shouldn’t feel embattled in today’s secular and “woke” culture, that they are somehow dominant in America. ”Even though they are in the majority and even though they have a lot of cultural and political power, they will continue to insist that they are actually the ones who are embattled,” she said. “Therefore, what choice do they have but to be ruthless and to seize power?”

PBS anchor Laura Barron-Lopez naturally turned to January 6 to associate all conservative Christians with rioting: “We saw a lot of Christian imagery in the crowd on January 6, when rioters stormed the Capitol, and faith being used to justify violence there.”

DuMez briefly expressed that not all Christians supported violence at the Capitol. But then she gave PBS what it wanted. Yes, with “more extreme versions of Christian nationalism, we do see a correlation between the idea that America has a special destiny, and it’s a destiny that’s under threat, and it must be protected. We see connections between that and a willingness to use violence.”

Barron-Lopez cited a University of Maryland poll that 61 percent of Republicans would favor an official declaration that the U.S. is a Christian nation, but, also, a majority of Republicans understand that the government doing so would be unconstitutional. One can cite Pew polls that 63 percent of Americans identify as Christians – a Christian nation – without canceling the religious freedoms in the First Amendment. A significant chunk of those self-identified Christians are not conservative at all.

But PBS and DuMez are preaching to the liberal choir that the Christian right is a menace that is eroding democracy and pushing “voter suppression,” somehow. There’s no conservative counterpoint to this midterm messaging on taxpayer-funded TV. That’s somehow not eroding democracy.