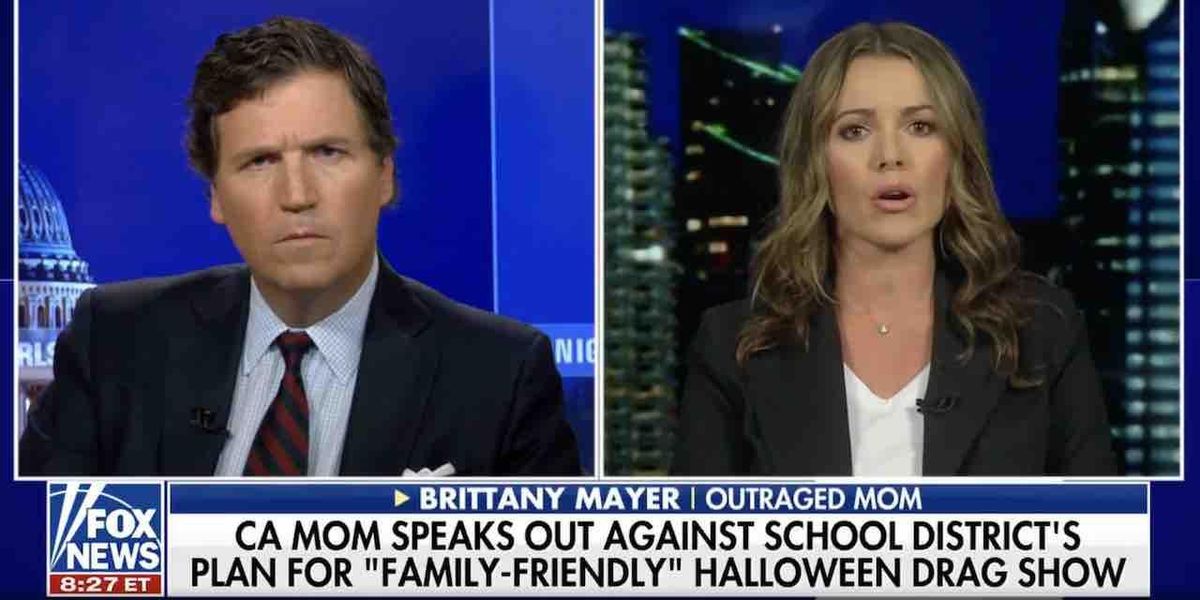 An outraged San Diego-area mother who went viral this week after blasting her school board as “groomers and activist pimps” for distributing a drag show flyer is calling on parents across America to stand against schools hyper-sexualizing children.

The Encinitas Union School District came under fire for sending to parents and students a flyer advertising a “queerest” Halloween party featuring a “family-friendly” drag show sponsored by a gay bar and a gender-reassignment surgery center.

Here’s parent Brittany Mayer viciously dismantling board members at their public meeting for their massive misstep:

“What is it about a grown man costumed in a sparkly bra with augmented boobs busting out, a leather miniskirt barely covering his twerking ass, with tuck tape on his front while spreading his fish-netted legs as he writhes on the ground, grinding his groin next to a minor — family-friendly?” Mayer asks.

“You all played the activist pimp for an Align Surgical center and for a 21-plus gay bar,” Mayer continues. “It makes you groomers and activist pimps, and we won’t have those sitting on a school board who oversees the education of our children.”

On fire, she gives them a final slap in the face: “You all stepped out of line, you should be ashamed. There’s nothing loving, there’s nothing ‘let’s unite and include’ because the logical conclusion of that is you end up in diabolical evil. There are boundaries, and you don’t slap family-friendly titles on stuff to cover your ass.”

Mayer appeared Thursday on Fox News’ “Tucker Carlson Tonight” and told the host that this kind of thing is coming to every school across America — so parents everywhere need to be ready to stand against it.

“I wanna make it really clear that this is not an isolated incident. This is coming to every school across the nation,” she told Carlson. “And if you think that it’s just gonna stay in California, you’re dead wrong. This is coming everywhere, and it’s why we stood up, and we said we’re gonna nip this in the bud, we’re not going to play by the rules that we’re supposed to be afraid, that we’re gonna be punished if we don’t speak up now. And I hope this breeds courage for parents all over the nation who see this trend starting to change where … our kids aren’t being educated in the fundamentals; they’re being hyper-sexualized, and we’re done with this.”

Mayer added to the host that school officials who are hell-bent on hyper-sexualizing children slyly use words to mask their intentions, and parents need to call that out.

“You can slap labels on anything; you can make anything ‘family-friendly’ that you want. And that’s the danger of this ideology — is that we’re being told to use new terms and new language,” she said, adding that “I think we do a disservice when we play by those rules. We need to stand up.”

Fox News said the district reportedly took down the flyer after finding it did not meet “district approval criteria.”

Antifa thugs attack women protesting potential placement of murderous transsexual in women’s prison: ‘These are the kind of men we want to keep out of the prison’
CBS’s Brennan Frets ‘Right-Wing’ Israel will Ban Gay Pride Parades
Report: Chinese state media used TikTok to run propaganda campaign against Republican candidates in midterm elections
One dead, others injured after ‘rogue wave’ strikes Viking Polaris ship
As I Mark 80 Years of Age…