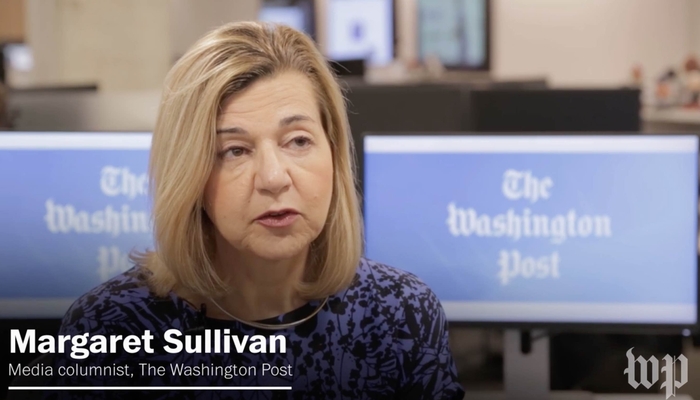 Margaret Sullivan recently stepped away from her soapbox as a media columnist for The Washington Post, but she has a new book out titled Newsroom Confidential: Lessons (and Worries) from an Ink-Stained Life. Mark Judge at the Washington Examiner provocatively asserted journalism is a like a drug, and they became addicted to the power of “doing good,” like forcing Richard Nixon to resign over Watergate.

Judge quoted Sullivan on liberal heroes Bob Woodward and Carl Bernstein: “They were badass, the essence of swashbuckling cool, especially when confused in my teenage mind with Robert Redford and Dustin Hoffman … I wanted to be them, or at least immerse myself in that newsroom culture. Righteousness could be achieved, according to the self-important journalism adage, by ‘afflicting the comfortable and comforting the afflicted.’“

This kind of motto defines a war on objective or fair/balanced reporting. It’s a radical-left motto, in which the “comfortable” are defined as rich and white and straight and Christian, and the “afflicted” are those they have decided are “marginalized” — the poor, racial and sexual minorities, illegal immigrants, prisoners, and so on.

Judge correctly diagnoses Sullivan as “ridiculously hyperbolic” for describing the January 6 riot as “one of the hinge events in all of American history.” We might ask: Isn’t it too early to locate a “hinge”? A “hinge” to what? But in the liberal worldview, Watergate was one of the worst scandals in American history — except for the repeated occasion in Republican presidencies where people like John Dean are wheeled in to rule the newest scandal is “worse than Watergate.”

Sullivan also can’t seem to concede that the Mueller probe ended in no charges for Trump. She’s left with an energetic reading of the post-game report: “Anyone who bothered to read the report issued by special counsel Robert Mueller would know that Russia was guilty of illegal interference ‘in sweeping and systemic fashion’ and that the Trump campaign was willing to receive that help.”

Judge points her to the actual Mueller conclusion she didn’t seem to read: “The investigation did not establish that members of the Trump Campaign conspired or coordinated with the Russian government in its election interference activities.”

Sullivan identifies as a radical on creeping wokeness in American newsrooms: “Perhaps surprisingly, given my age and long experience in newsroom management, I found myself in sympathy with those demanding radical change. Often, I was on the side of what was despairingly and falsely called the ‘woke mob’ — the younger, more diverse staffers who were supposedly running roughshod throughout Big Journalism’s newsrooms.”

So naturally, Sullivan sided with the “1619 Project” at The New York Times, in defiance of actual historians challenging it as un-factual. ”Despite the pushback (a tiny portion which was grounded in objections by a few historians to some of the project’s assertions),” she writes, “it accomplished its goals: Whether they accepted it or not, many more people — in the United States and around the world — are aware of this neglected and ignored history than before Hannah-Jones began to write about it.”

Sullivan loved to proclaim she and her liberal colleagues were the “reality-based media.” These book passages underline she belongs to the radical-left media.