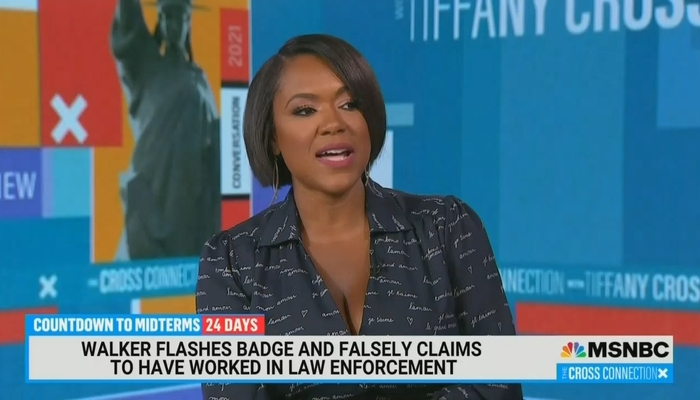 Did you hear a boom ’round about 11 am on Saturday morning? That was the sound of the Georgia senatorial debate between Herschel Walker and Ralphael Warnock blowing up on Tiffany Cross during her MSNBC show.

Prior to last night’s debate, Cross was surely salivating, anticipating a weak performance by Herschel Walker. It seemed a sure thing that Cross would lead this morning’s show with a segment on the debate. But when she announced that it wouldn’t be discussed until the second hour, it was obvious that the debate hadn’t gone according to Cross’s plan.

When the segment finally did air, things went from bad to absolutely horrible for poor Tiffany. Her two guests, both African American women, were Errin Haines, a liberal activist with The 19th and an MSNBC commentator, and Tia Mitchell, the DC correspondent for the liberal Atlanta Journal-Constitution.

Cross was presumably counting on her guests to take shots at Walker’s performance. Instead, to Cross’s shock and horror, both guests said that Walker met or exceeded expectations, and that his performance gave possibly wavering Republicans reasons to vote for him!

And in a final disaster for Cross, Haines said that many of the people with whom she watched the debate thought that Warnock failed to meet expectations!

Cross tried to push back, calling Walker’s statements during the debate “asinine” and “incoherent.” But whom are voters going to believe: Tiffany Cross, or their lyin’ eyes?

Cross even kvetched that “some of the questions posed to Warnock were a bit unfair. They seemed to skew a bit conservative.” A debate in which the moderators’ questions skewed conservative? That would be a first! Cross is obviously accustomed to pro-Democrat debate-moderator slant!

Cross has a history of making and hosting ugly attacks on Walker. In 2020, Cross said that Walker and other black speakers at the Republican National Convention “really did look like a modern-day minstrel show to me.”

On her MSNBC show in April, Cross invited on regular guest Elie Mystal, who proceeded to brand Walker as a “token, shucking and jiving” for his “white handlers.”

And in August, NB’s Kevin Tober caught Mystal, back on Cross’s show, calling Walker “clearly unintelligent” and “what Republicans want from their negroes. To do what they’re told.”

On Tiffany Cross’s MSNBC show, both guests saying that Herschel Walker met or exceeded expectations in the Georgia senatorial debate, and gave Republicans reasons to vote for him, was sponsoed in part by by Dell, Abbott, maker of Rinvoq, and Subway.

TIFFANY CROSS: Georgia, I have to ask you, what the hell is on your mind? Well, I have two ladies here who are going to help me get through all of this. And that is Errin Haines, she’s Atlanta Errin, for MSNBC, she’s a political contributor and editor-at-large for The 19th, Errin 3000, we like to call her.

And Tia Mitchell, she’s a Washington correspondent for the Atlanta Journal-Constitution, and, I just discovered, a FAMU [Florida A&M, a historically black university] alum, and Delta Sigma Theta [a historically African American sorority] member. So, happy to have you both here.

Okay, so Tia, I’ll start with you because I honestly do not feel like these debates move the needle for voters. I’m baffled that 6% of Georgia voters say that they’re undecided. What the hell are you undecided about? But then I wonder, are people being dishonest when they’re being contacted by pollsters. So what do you think?

TIA MITCHELL: I agree. I don’t think the debates move the needle.

The only thing I think may have been impacted by the debate is if there are Republicans, conservatives, who were starting to pull back and say, like, it’s been too many mistakes by Herschel Walker, too many blunders, too many incoherent answers to questions.

CROSS: [shocked and horrified] Did he? Did he?

MITCHELL: Well, I mean, again, if it just was, can he speak coherently, can he have answers that make sense?

CROSS: Did he? Did he speak coherently?

CROSS: Yeah, well, Errin, Tia is saying they had low expectations, and people wanted to hear him speak coherently.

And I think that when you saw Herschel Walker, for example, looking directly at the camera and talking about the issue of mental health, saying, look, I struggled with this. If you need help, all you have to do was ask. That might have been something that was very powerful for voters.

I agree with Tia, there are, were, there’s definitely in Georgia some number of Republicans who, at this point, literally early voting is starting tomorrow in Georgia. We are three Tuesdays away from election day.

This is the candidate that Republicans have, it so, it is just a matter of how many of them are going to feel comfortable getting on board with this or not.

And that debate may have made some of them get more comfortable with him, because this was the only time that these candidates are going to debate. And, you know, you’ve got running back Herschel Walker, who literally only had to prepare for game day last night.

And I think that he hit a lot of the points that he needed to hit. Because, he managed to at least meet, if not exceed the expectations that were there for him.

And, a lot of folks who were watching that debate said that Senator Warnock, a seasoned, gifted pastor who is also the
sitting senator, did not meet the expectations —

HAINES: — in the way that they thought he would. And so, it depends on who was watching that debate and what they thought they saw, versus what those of us in the media who, frankly, do not have a vote in this, were looking at. It could end up being very different.

CROSS: Yeah, but that is so wild to me that somebody said Walker met expectations but Warnock did not.

And I have to say I thought some of the questions posed to Warnock were a bit unfair. They seemed to skew a bit conservative, to be honest. And so, it’s just wild to me. I think sometimes the media goes out of its way to normalize this kind of asinine behavior. This overcautious effort to not appear to be partial or biased. But, we, as members of the media, we ought to be able to say, this man gave asinine responses that were incoherent and did not make sense.