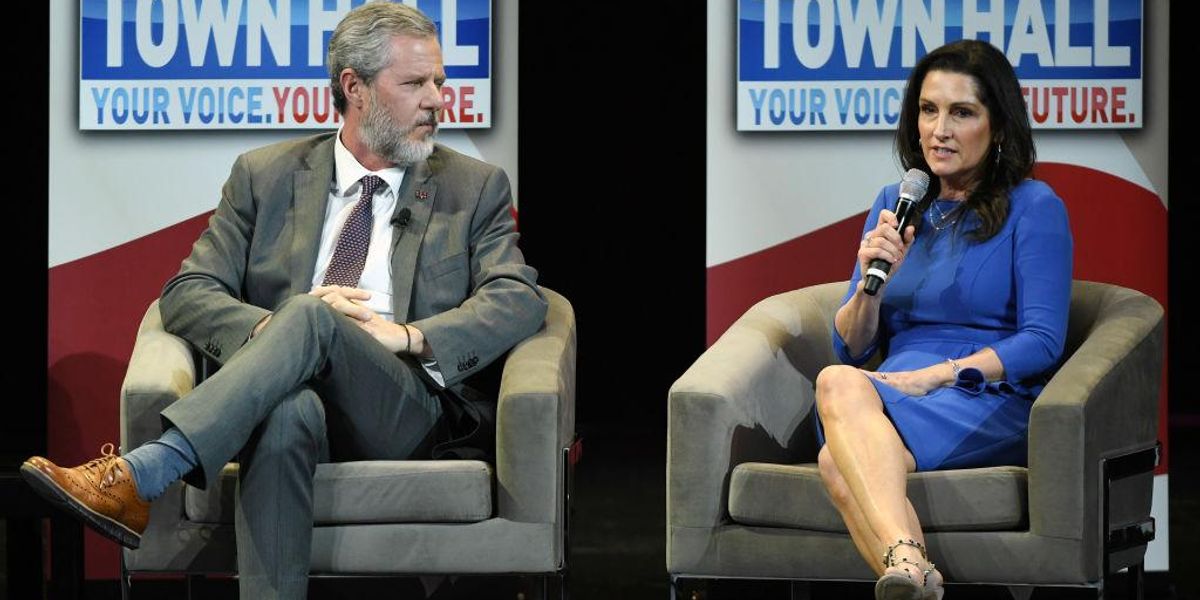 A former Miami pool boy is dishing explicit details about the affair he had with former Liberty University President Jerry Falwell Jr.’s wife, Becki Falwell. An upcoming book and documentary breathed new life into the world-rocking scandal that started 20 years ago.

Falwell Jr.’s fall from grace happened in 2020 when Reuters exposed the affair between his wife and a pool attendant. Falwell Jr. was forced to resign as president of Liberty University – one of the largest Christian universities in the world.

The former pool boy – Giancarlo Granda – is publicizing scandalous revelations of the longtime tryst from 20 years ago to promote a new book and documentary film.

“They have a public image, but behind the scenes, they’re freaks,” Granda said in the trailer for the upcoming Hulu documentary “God Forbid: The Sex Scandal That Brought Down a Dynasty.”

Granda previously worked as a pool attendant at the Fontainebleau Hotel in Miami Beach. While working as a pool boy on March 13, 2012, Becki Falwell allegedly began flirting with Granda – who was 20 at the time.

Granda said he had no idea who the mysterious older woman was.

Of the first time meeting her, Granda described Becki as in “her mid-forties, attractive, fit, and very charismatic.”

He claimed that Becki told him, “Oh, these girls don’t know what they’re doing. You need someone older.”

He responded by flirting back.

In his upcoming book “Off the Deep End: Jerry and Becki Falwell and the Collapse of an Evangelical Dynasty,” Granda wrote, “It all seemed innocent enough, but then near the end of my shift, she asked me to sit down next to her on the daybed, where nobody could hear us, and in a conspiratorial tone asked me, ‘Hey, do you want to come back to my room?'”

Granda alleged that Becki informed him, “There’s just one thing . . . My husband wants to watch.”

After Granda purportedly hesitated on the offer to have an affair with a married woman, Becki allegedly reassured him, “Oh don’t worry, he’ll hide in the corner and watch us. That’s his thing. You won’t even know he’s there.”

Granda wrote in his book, “By way of explanation, she said that she and her husband had visited Miami Velvet, a local swingers club in Doral. A lot of swingers stayed at the Fontainebleau, so Miami Velvet was well known to all of us who worked there.”

Granda claimed that he met the couple at a Days Inn later that night for the rendezvous.

“Jerry lay on the one closest to the door, dressed, but with his jeans unbuttoned and fanned open so you could see his underwear; shoes off, with his shirtsleeves rolled up to the elbows,” Granda alleged in his book.

“I kissed Becki, and she was practically vibrating,” Granda said. “I picked her up and carried her over to the second bed. She was surprisingly light. She wasn’t wearing any panties, which is the kind of thing that makes an impression on you at twenty, and she half whispered, ‘Our rule is anything but intercourse.'”

Granda said after the sexual encounter Becki “was buzzing, electric, and Jerry continued to giggle with excitement.”

The next day, Granda said that Becki called him to have another sexual tryst, and he agreed.

The Miami romp led to a six-year affair.

Granda said Falwell’s children “had no idea that their dad liked to record his wife having sex with me.”

Falwell even made Granda a business partner.

The Falwells have not denied Granda’s allegations of an affair with Becki, but Jerry said he was not part of the relationship. The Falwells alleged that the former pool boy attempted to extort them to keep their secret quiet.

You can watch the trailer for “God Forbid” below.

CNN analyst declares that freedom of speech is ‘nonsense,’ claims Elon Musk’s new Twitter empowers Vladimir Putin and is ‘destructive to American national security’
Doocy, Wegmann, Friends Grill WH Over Their Weak Support of China Protests
New York City Will Hospitalize More Mentally Ill People Even If They Aren’t a Threat
The Left Decides the Preferred Narrative Trumps Preferred Pronouns
‘I am thankful for the freedom of self’: Women express gratitude for their abortions in piece posted on Thanksgiving