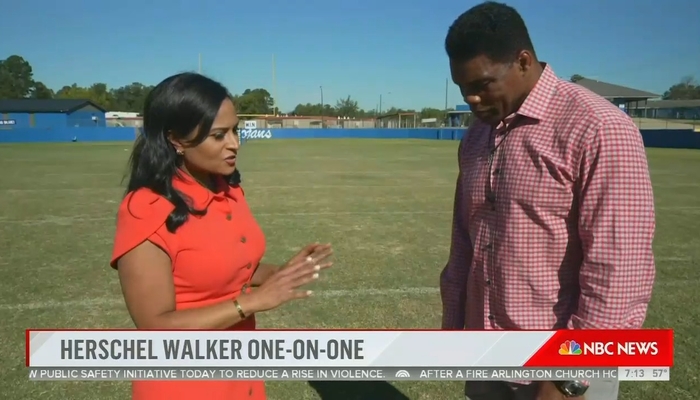 NBC on Monday Demonstrated that the network morning shows are still intent on investigating everything when it comes to Herschel Walker, but offer a collective yawn when it comes to the controversies connected to far-left Democratic Senator Raphael Warnock.

The Today show’s Kristen Welker scored an interview with Walker and devoted all 4 minutes and 43 seconds to grilling the Republican. She mentioned the scandal involving a woman who claimed he paid for her abortion in 2009. After that, Welker dived into the moment trending on liberal Twitter: Walker brandishing a badge at his debate with Warnock:

KRISTEN WELKER: Walker has faced criticism embellishing statements from academic and business record and ties to law enforcement, highlighted by Raphael Warnock in their debate.

RAPHAEL WARNOCK: I have never pretended to be a police officer. And I have never threatened a shootout with the police.

WELKER: Walker then brandished what appeared to be a badge.

HERSCHEL WALKER: And you know what is to funny? I am with many police officer and at the same time —

WELKER: We asked him to explain that moment. Where is this from?

WELKER: The sheriff confirmed to NBC News he gave him an honorary badge, which allows him to help with community support in a crisis.

As I wrote on Thursday:

All three networks last week eagerly covered the allegation that Republican Senate candidate Herschel Walker paid for an abortion in 2009. But this week, with the claim that Democratic Senator Raphael Warnock — a pastor at Ebenezer Baptist Church in Georgia — is part of evicting the disadvantaged, the poor, and veterans from a church-owned apartment complex, they’ve shown no such zeal.

There was no mention of this on Monday. The Free Beacon Scoop last week ignored this scoop:

Warnock’s Ebenezer Baptist Church, where the senator serves as senior pastor—drawing a salary as well as a generous $7,417 monthly housing allowance—has moved to evict disadvantaged residents from an apartment building it owns, one of whom it tried to push out on account of merely $28.55 in past-due rent.

A transcript of the segment is below. Click “expand” to read more.

HODA KOTB: In the meantime, with the midterms three weeks away, early voting is getting underway in Georgia this morning. The state’s Senate battle, one of the key races that will decide which party controls the Senate. Over the weekend, Republican candidate Herschel Walker sat down for an exclusive interview with NBC’s Kristen Welker. Kristen, good morning.

KRISTEN WELKER: Hi, Hoda. Good morning to you. Herschel Walker sat down with us after his first and only debate with his opponent, Raphael Warnock. We discussed everything from the economy where he touted the need for energy Independence to former Presidents Trump and Obama. And I asked him about the largest controversy swirling an his campaign that allegation the staunch anti-abortion candidate paid for a former girlfriend to have an abortion in 2009 which he is again denying.

In a one-on-one interview in his hometown of Wrightsville, Georgia, Herschel Walker providing his most extensive comments about allegations he paid for an ex-girlfriend to have an abortion in 2009. Why not reach out to her?

WALKER: Why should I? Why do I need to?

WELKER:  NBC News has spoken to that former girlfriend, who provided us with what she says is a copy of a $700 check that Walker gave her to pay for the abortion and a receipt from the medical center in Georgia where she alleges it took place. NBC News is not revealing the woman’s identity or the documents to protect the privacy of all parties, but we did show a copy of the check to Walker, who said the allegation he paid for an abortion isn’t true.
WALKER: This is still a lie because she is the mother of my child. So you are going to see a check, somebody giving a check. It’s a lie.

WALKER: I have no idea what that could be for?

WELKER: Is that your signature?

WALKER: It could be. But it doesn’t matter whether it’s my signature or not.

WELKER: When pressed, walker said definitively for the first time the check is his.

WELKER: Why should voters believe you?

WALKER: Votes should believe me because I have been very transparent about everything I have ever done.

WELKER: He has also faced allegations of domestic violence for multiple women, including his ex-wife, and his 23-year-old son Christian, a conservative influencer.  He said and quote, you threatened to kill us and had us move six times in six months, running from your violence. You said you love your son Christian.

WELKER: For the voters who want to hear an answer to the allegation about violence? Is that true? What should people know?

WELKER: Walker has faced criticism embellishing statements from academic and business record and ties to law enforcement, highlighted by Raphael Warnock in their debate.

RAPHAEL WARNOCK: I have never pretended to be a police officer. And I have never threatened a shootout with the police.

WELKER: Walker then brandished what appeared to be a badge.

WALKER: And you know what is to funny? I am with many police officer and at the same time —

WELKER: We asked him to explain that moment. Where is this from?

WELKER: The sheriff confirmed to NBC News he gave him an honorary badge, which allows him to help with community support in a crisis. Georgia is key to determining which party controls the Senate while walking on the Wrightsville field that bears the former football star’s game Walker revealed former President Trump called him after the debate. Did he give you any indication, just to put a fine point on it, that he will be here in Georgia for you campaigning for you?

WALKER: If I needed him, he will come.

WELKER: Now, there was another debate in Atlanta last night which walker did not ted citing disagreements with the format. We did ask Senator Warnock for an interview board of elections but he declined. His campaign did send this comment overnight, which I will read, saying, quote, “This campaign will come down to who is ready to represent Georgia and it is clear that is not Herschel Walker.”

KOTB: And Kristen, Herschel Walker also did weigh in on the fact that former President Obama is coming to campaign in Georgia?

WELKER: That’s right. High stakes, Hoda. Former President Obama is set to campaign in Georgia next week with control of Congress at stake. I asked Walker if he is concerned. Will this impact the race? He responded defiantly Saying he is ready to fight both Senator Warnock and Mr. Obama. Hoda?