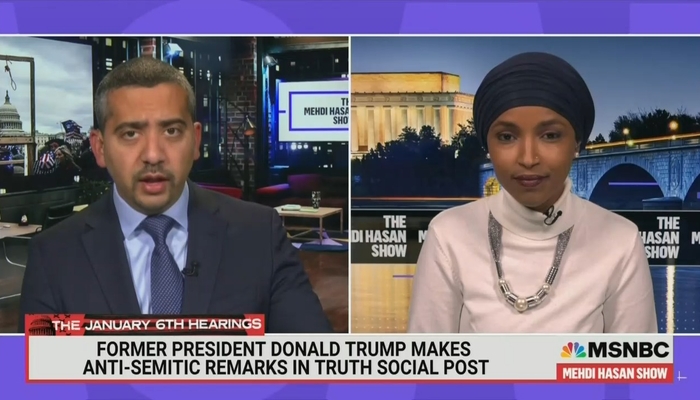 This would be funny if it weren’t so outrageous.

On his MSNBC show on Sunday, Mehdi Hasan, formerly of Al Jazeera, teed up notorious antisemite Democrat Rep. Ilhan Omar to falsely accuse Donald Trump of making an antisemitic post, and to wring her hands of the rise of antisemitism in America.

As Eli Lake, tongue firmly in cheek, tweeted: “Up next, Vladimir Putin will talk to Mehdi about the importance of international law in a nuclear world.”

Hasan introduced the subject by abjectly mischaracterizing Trump’s tweet as having “threatened American Jews.” To the contrary, as we noted yesterday, “far from making a threat against American Jews, Trump’s tweet was actually a plea for greater support for Israel!” Ilhan proceeded to wring her hands over Trump’s alleged use of antisemitic “tropes.” In particular, she condemned Trump’s supposed charge of “dual loyalty” against Jews. This from the woman who said, in a reference to American Jewish supporters of Israel, “I want to talk about the political influence in this country that says that it is OK for people to push for allegiance to a foreign country.”

Omar has a long history of anti-Israel/antisemitic statements. There was that notorious tweet in which she wrote: “Israel has hypnotized the world, may Allah awaken the people and help them see the evil doings of Israel.”

Her most infamous bit of classic antisemitism came when, directly pointing the finger at AIPAC, Omar claimed US support for Israel is “all about the Benjamins baby.”

In 2019, those and other outrages earned Omar the dubious honor of being voted the Jerusalem Post’s “antisemite of the year.”

Ilhan Omar decrying the rise of antisemitism in America? Gag me with a yarmulke!

Note: speaking of laugh lines, Hasan whines about Omar having been “demonized”  as an antisemite.,”  Demonized?

On his MSNBC show, Mehdi Hasan teeing up Ilhan Omar, of all people, to falsely accuse Donald Trump of having made a tweet that threatened American Jews, and to wring her hands over the rise of antisemitism in America, was sponsored in part by Pfizer, maker of Preparation H, Fidelity, Mercedes Benz, and Abbott, maker of Skyrizi.

MEHDI HASAN: Last question for you congresswoman. You have been demonized in recent years as an antisemite by many, especially by Donald Trump and the GOP over your criticisms of Israel, and of Jewish groups supportive of Israel. Some of which you have regretted and apologized for. You’ve said you should’ve been more careful in some of your language in the past.

And yet, this morning former President Trump tweeted, and I quote, “Jews need to get their act together and appreciate what they have in Israel before it’s too late.”

This coming from the guy who said you should have resigned from Congress for your comments. What do you make of Trump’s post this morning? And what do you think the right would be saying if you or Rashida Tlaib threatened American Jews in this way, which, of course, I know you wouldn’t have done.

ILHAN OMAR: Yeah, I mean, the hypocrisy of the Republicans is blatantly clear. They are not rushing out to condemn the president, who, the former president, who knowingly, repeatedly invokes dual loyalty. Tropes that are harmful and dangerous, as you know.

Antisemitism is on the rise. And all of us have a responsibility to condemn it, and to continue to have someone as the former president with his platform continuously speaking to his
white supremist base —

OMAR: — in such a language. It’s very scary and dangerous. And we have to condemn it in the strongest ways possible.

HASAN: Indeed. We will have to leave it there. Congresswoman Ilhan Omar, thank you so much for your time.

Democrats want to use banks to squelch gun purchases like they used social media to silence political opponents
James Woods To Sue Twitter Over DNC-Ordered Censorship
Man charged after drug-infused bachelor party turns deadly
‘We can no longer say this is a pandemic of the unvaccinated’: CDC data indicates vaccinated, boosted people together make up majority of COVID-19 deaths
Engineered FAMINE: German farmers ordered to SLASH nitrogen fertilizer usage to comply with EU green tyrants