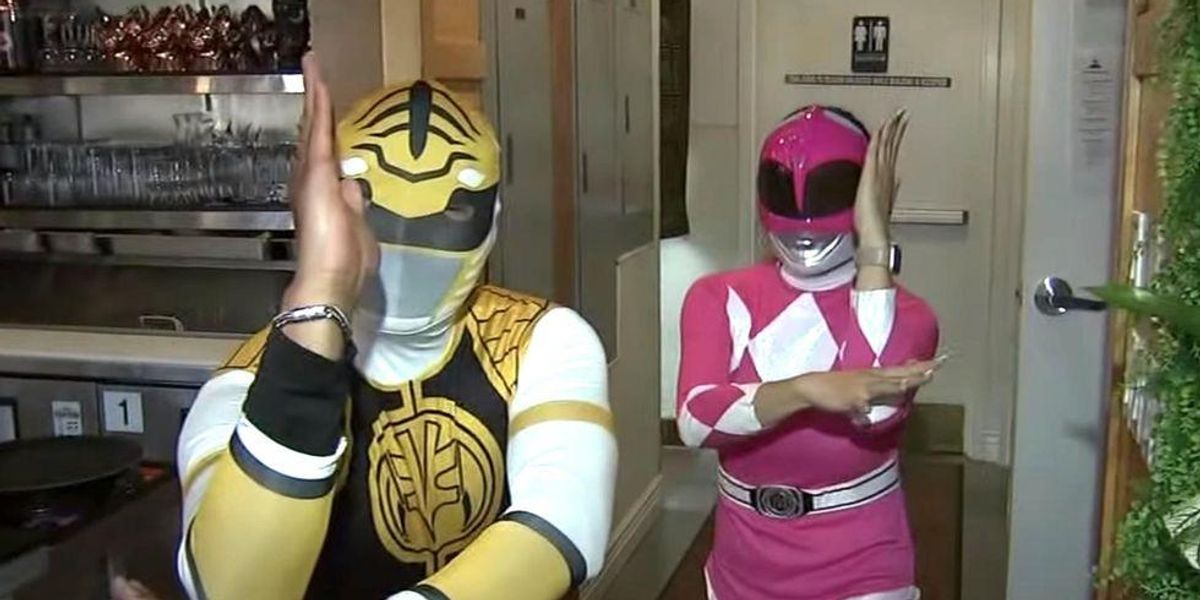 Restaurant workers dressed up as “Power Rangers” television superheroes jumped into action to rescue a woman who was allegedly being attacked by a man.

The incident unfolded at the Noka Ramen restaurant in Oakland, California, at about 8 p.m. on Friday.

The normal evening was interrupted when a woman ran into the restaurant and screamed that she was being attacked. The incident was documented by Ploi Pirapoken, a witness who posted what she saw in a series of tweets that went viral.

“When something surprising breaks out, you’re not sure it’s real,” said Pirapoken to KGO-TV.

Pirapoken tweeted that the man ran into the restaurant and put the woman into a chokehold. That’s when the Power Ranger servers intervened. She said the black and yellow Power Rangers asked him to leave, but he responded by taking a swing at them.

The woman ran into the kitchen for safety and the Power Ranger servers and some of the customers forced the man to go outside where he began throwing chairs at the windows. She said that he also yelled anti-Asian slurs at them.

“I, for some reason, start wolfing down my ramen,” she tweeted.

The customers and the servers barricaded the door in order to keep the man outside. Pirapoken said it took a long time before police arrived to arrest the man.

The Oakland Police confirmed that they had detained a man in the incident and said they believed that he was undergoing a mental health crisis.

The restaurant released a statement on social media about the incident.

“While we’re proud of our team for going above and beyond in our time of need, we would like to assure our guests that this event is an anomaly at our restaurant,” the statement read. “The safety of our guests and employees is of utmost importance to us. We are fully cooperating with the police in identifying the individual involved.”

Pirapoken concluded her viral thread with the lesson of the story.

“There’s no sense, moral or meaning to this story, except that I can’t believe power rangers are actually Thai? I’m grateful no guns were involved. And the food at Noka Ramen was excellent,” she concluded in her Twitter thread.

EXPOSED: Joe Biden’s Shameful Complicity With Anti-Semitism in His Party
Adam Schiff Is Really Angry About The Possibility Of Being Removed From The Intel Committee (VIDEO)
NYT Repelled by New ‘Deeply Conservative’ Congress ‘Bedevil[ing]’ Poor Biden
Alyssa Milano says she returned her Tesla because Elon Musk could have solved world hunger with the money he used to buy Twitter
OUT IN THE OPEN: UN and WEF admit to owning and controlling “science” and Big Tech